On Saturday, March 9th, I successfully summited Mt. Cabot, my 45th peak on the New Hampshire 4000 footers list.  However, this trip would start on Friday, as Mt. Cabot is the northern-most of all 48 peaks on the list. Without traffic, the trailhead is just shy of 4 hours away for me. For this hike, I decided to stay overnight at the Top Notch Inn in Gorham, and then make the 30 minute drive to the trailhead in the morning. If you're ever in need of staying in that area, the inn was perfect.  Clean, quite, reasonably priced and in a real convenient location for lots of the northern peaks.

The York Pond East trailhead is located at the end of a 7 mile ride down a plowed, yet snow and ice-covered road past the Berlin Fish Hatchery to a lot that fits two vehicles. I was the first car there on this day, with another truck pulling in shortly after. Proving once again that it really is a small world, after some quick introductions and conversations, the two hikers were from even further south than me, stayed at the same inn the night before, and were attempting their 44th peak, while I was attempting my 45th.

While this hike does begin on the York Pond trail, it is only for a short .2 miles until the junction of the Bunnell Notch Trail. 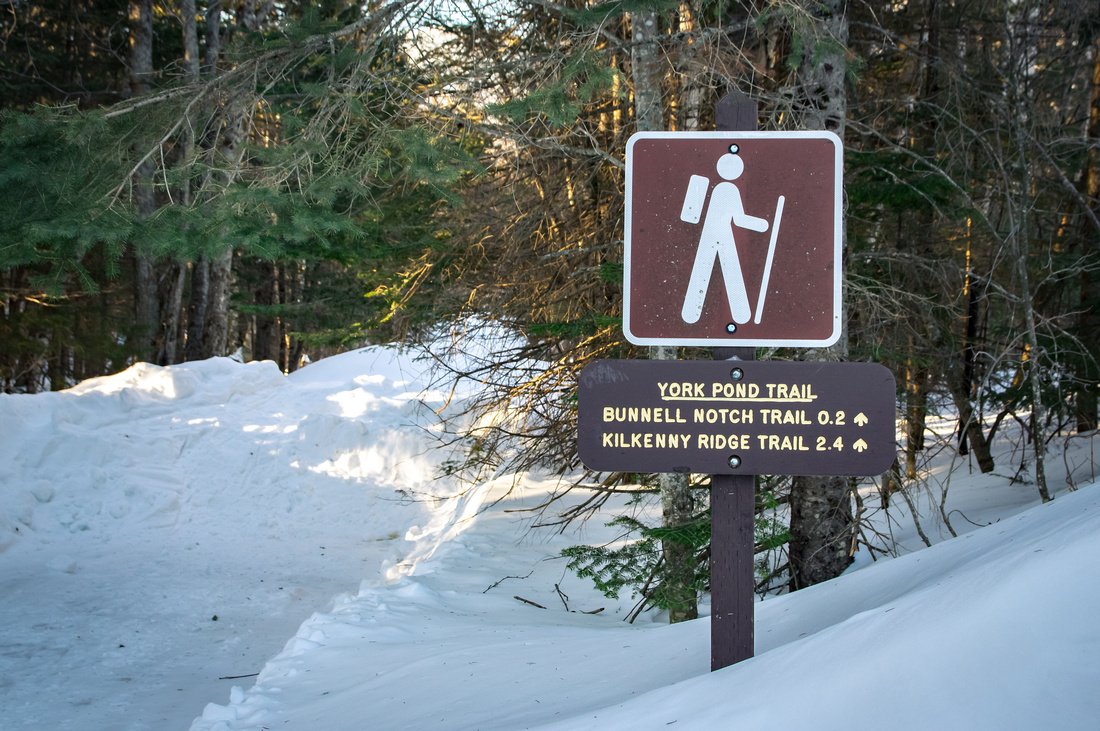 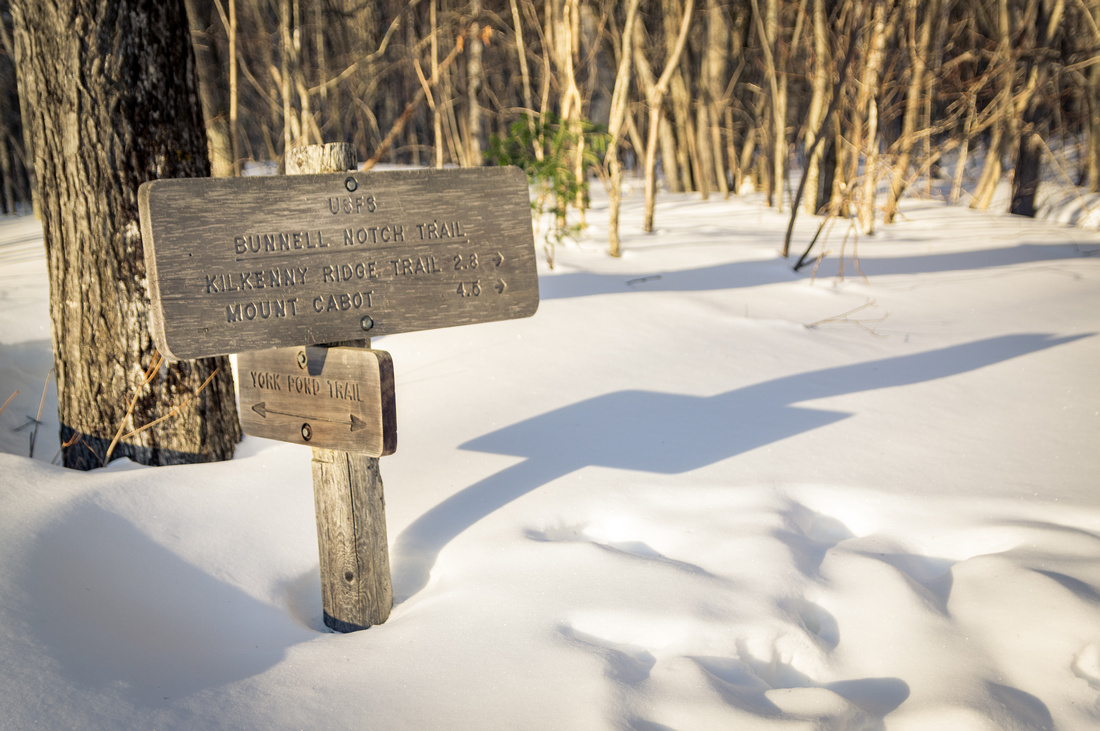 Even though it was only 7 degrees to start this hike, there wasn't a cloud in the sky, and the morning sun would quickly add some warmth on this day. The early portion of the Bunnell Notch Trail is along an old logging road, and other than a few fun stream crossings over some snow bridges, this is pretty much what it was like. 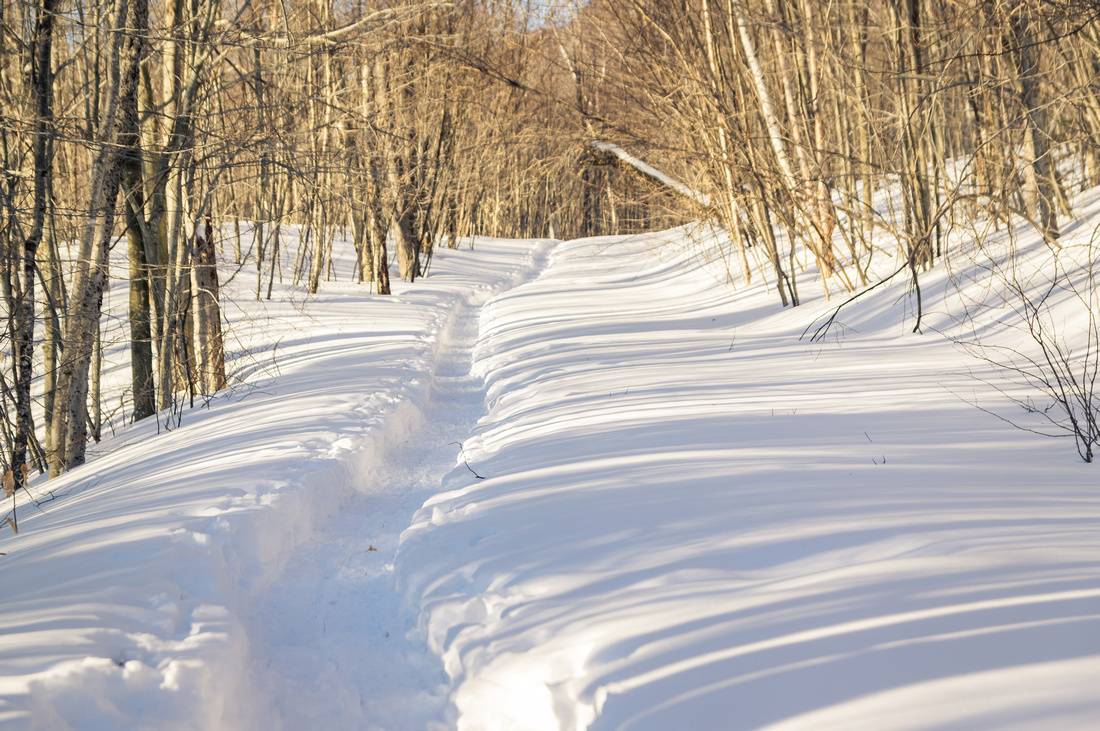 The trail makes a fairly abrupt left turn and starts to gently climb through a valley while also hugging the banks of a stream. A few more snow bridges and crossings are the only real challenges along the very deep established snowshoe bed. I don't think I saw a single cloud the entire hike, the skies looked like this in almost every direction. 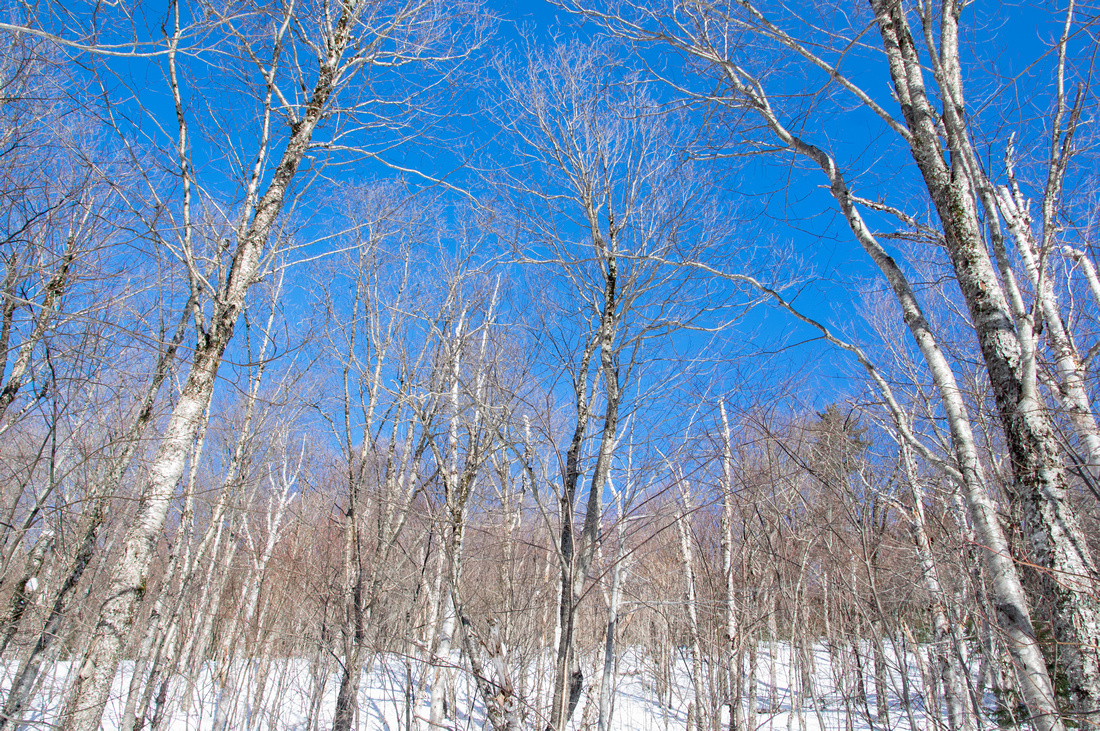 I noticed this tiny piece of old bark curled up along the side of the trail and it really stood out against the pure white of the snow.

This next photo shows how deep the snow depths are in most areas of the White Mountains right now.  Do NOT step off the trail! 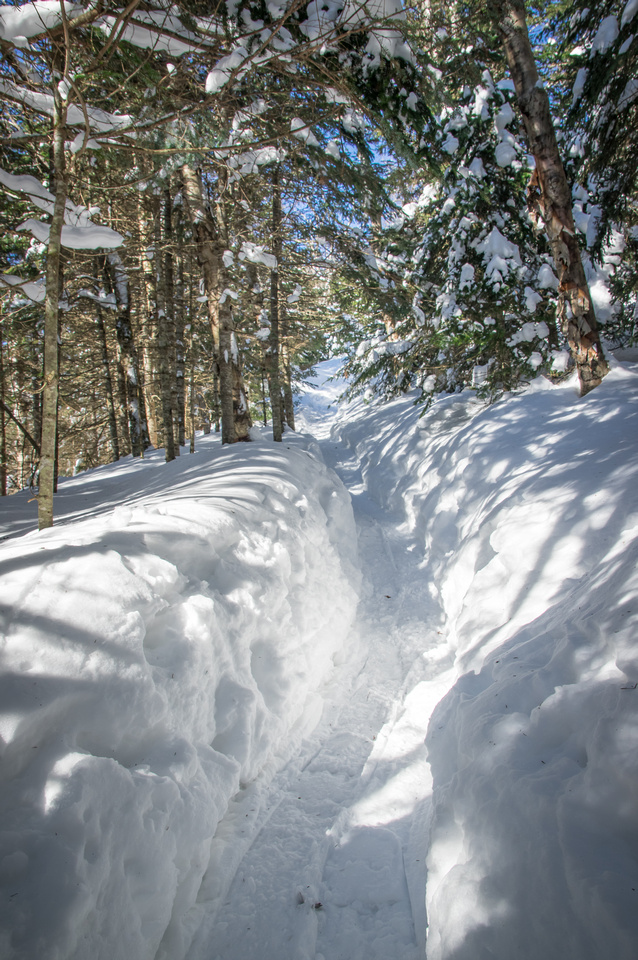 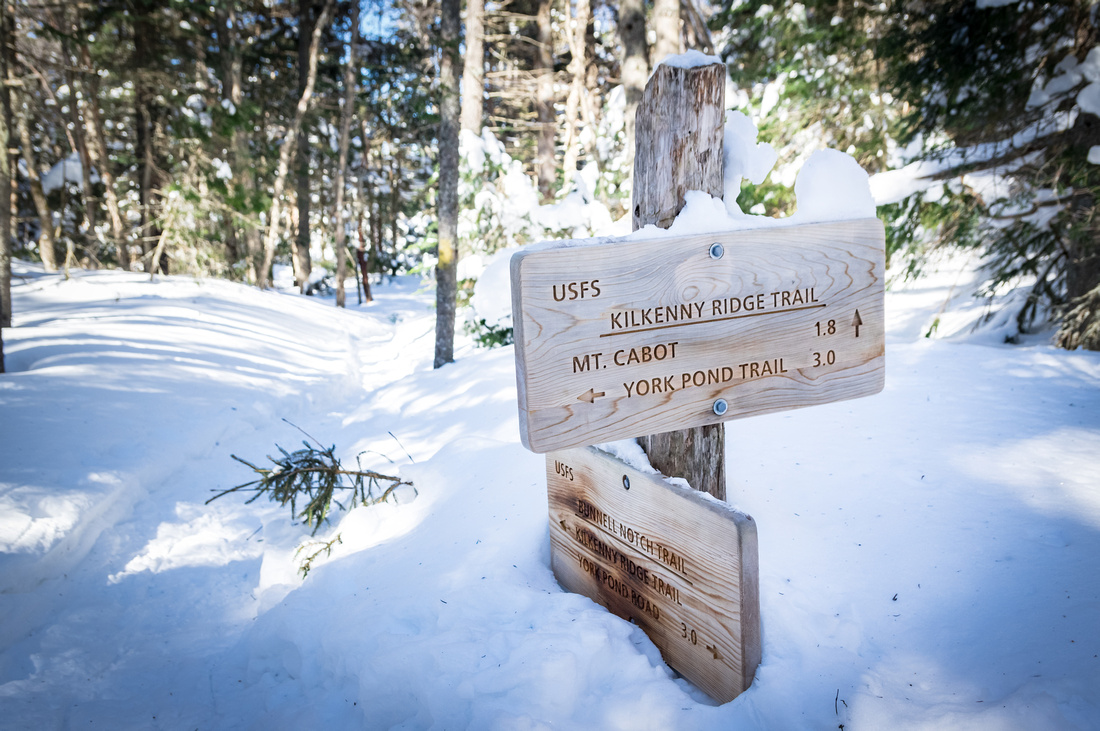 The Bunnell Notch Trail intersects with the Kilkenny Ridge trail to the summit of Mt. Cabot. It is along this trail that most of the elevation gain is experienced. A little ways before the summit, there's a small sign on a tree that says "VIEW", and it was well worth the very short walk over to the edge. 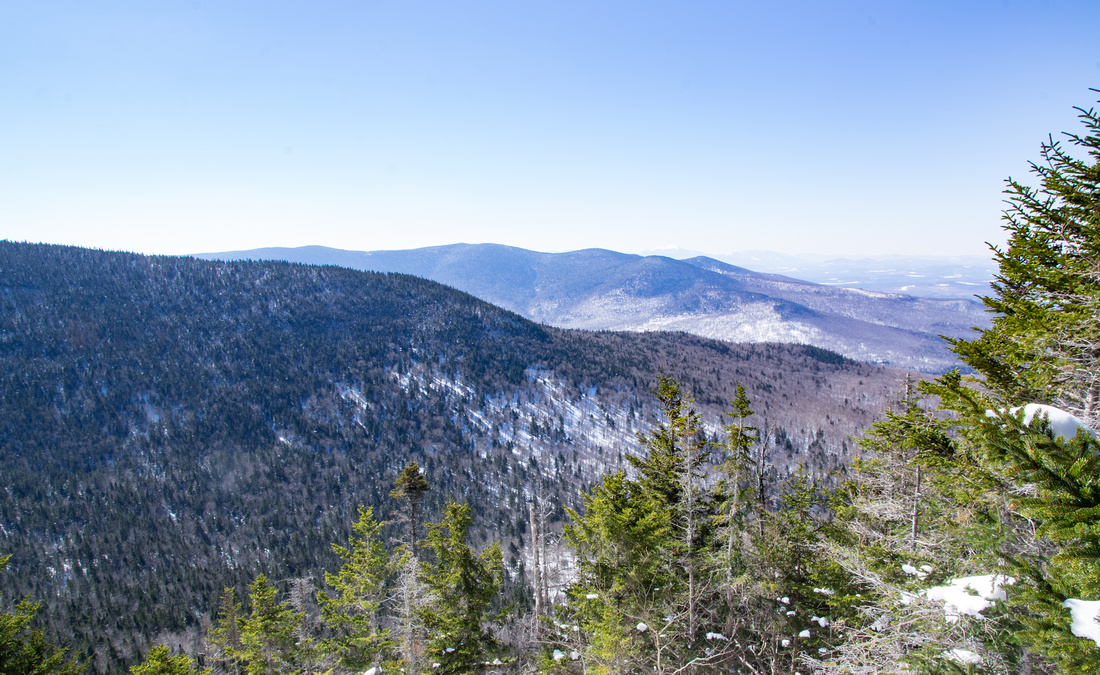 About 1/4 mile from the summit, you'll see the outhouse first, and then you'll arrive at Cabot Cabin. 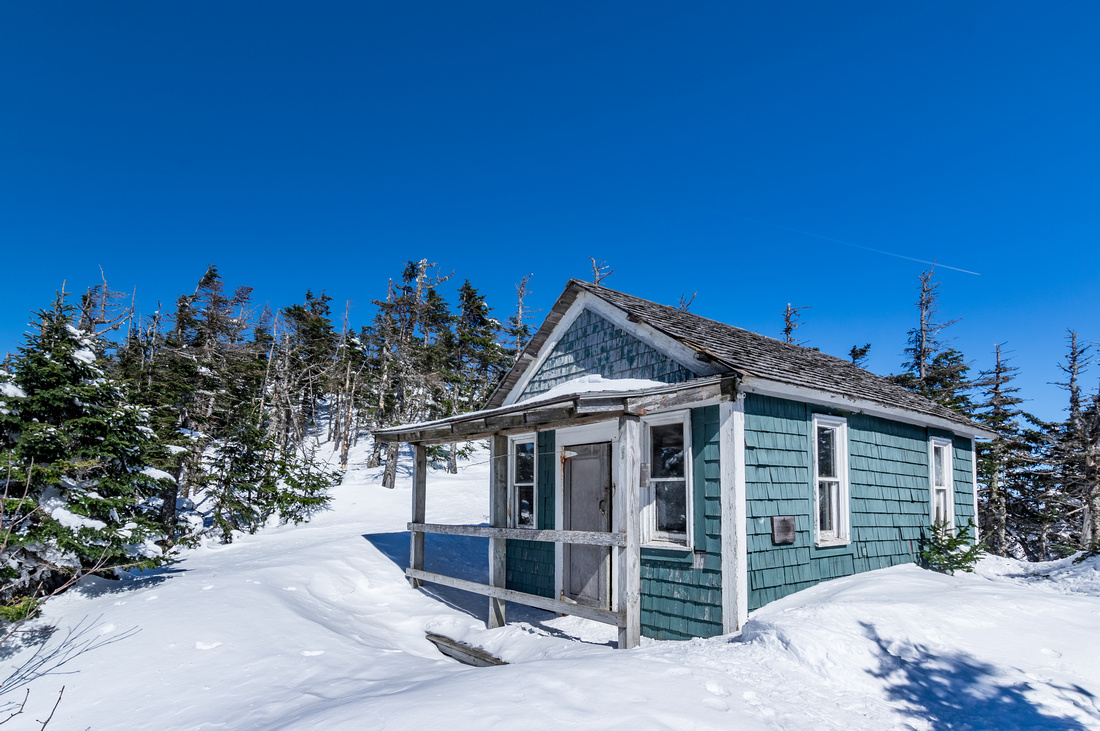 The cabin is located just below the clearing where the former fire tower used to be and now serves as a first-come-first-serve hikers cabin. A view from the porch... 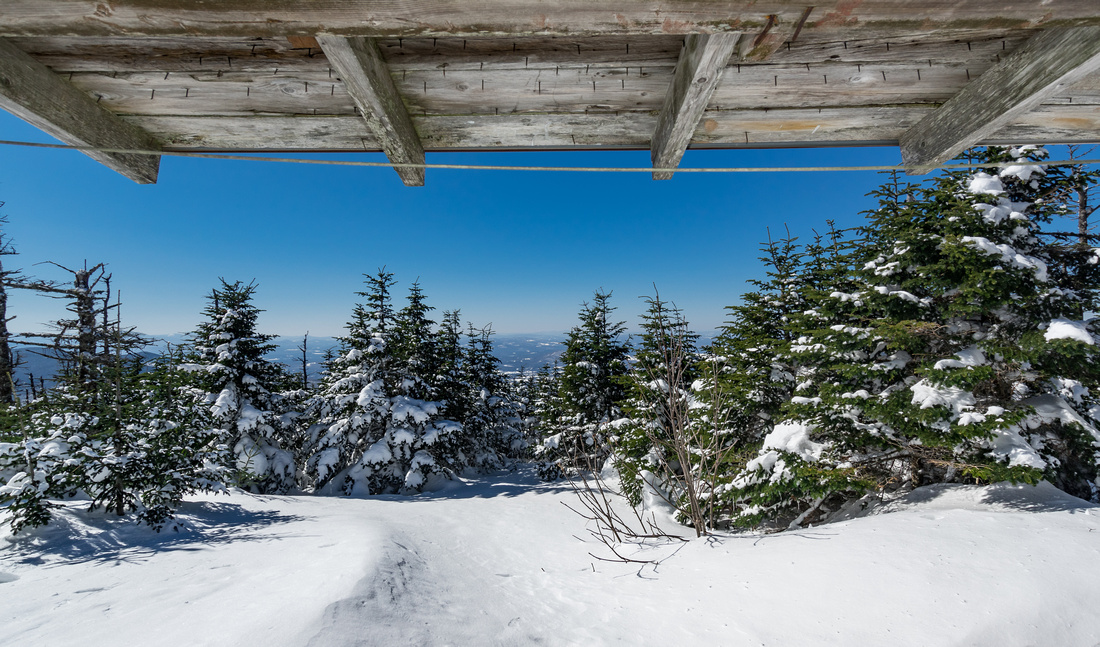 I went inside the cabin to get out of the cold breeze outside, and to take a quick food and water break. This photo was taken from inside the cabin, looking back through to the view outside. 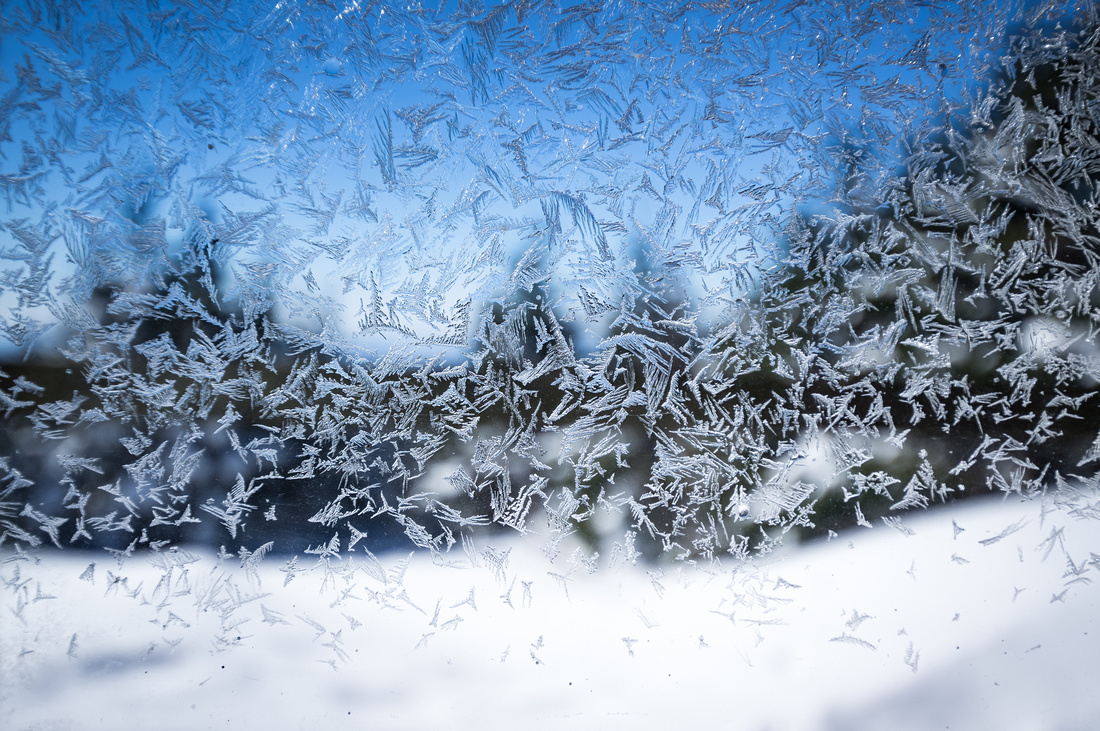 After hiking a few feet past the cabin, there's one of the best viewpoints of the day.

The actual summit really didn't have many views, at least not any which someone had broken the trail to already. The snow was really quite drifted and soft on the summit, and I wasn't too interested in being the one that attempted to venture into the unknown deep drifts.  I took a quick picture of the sign on the summit, then headed back down. 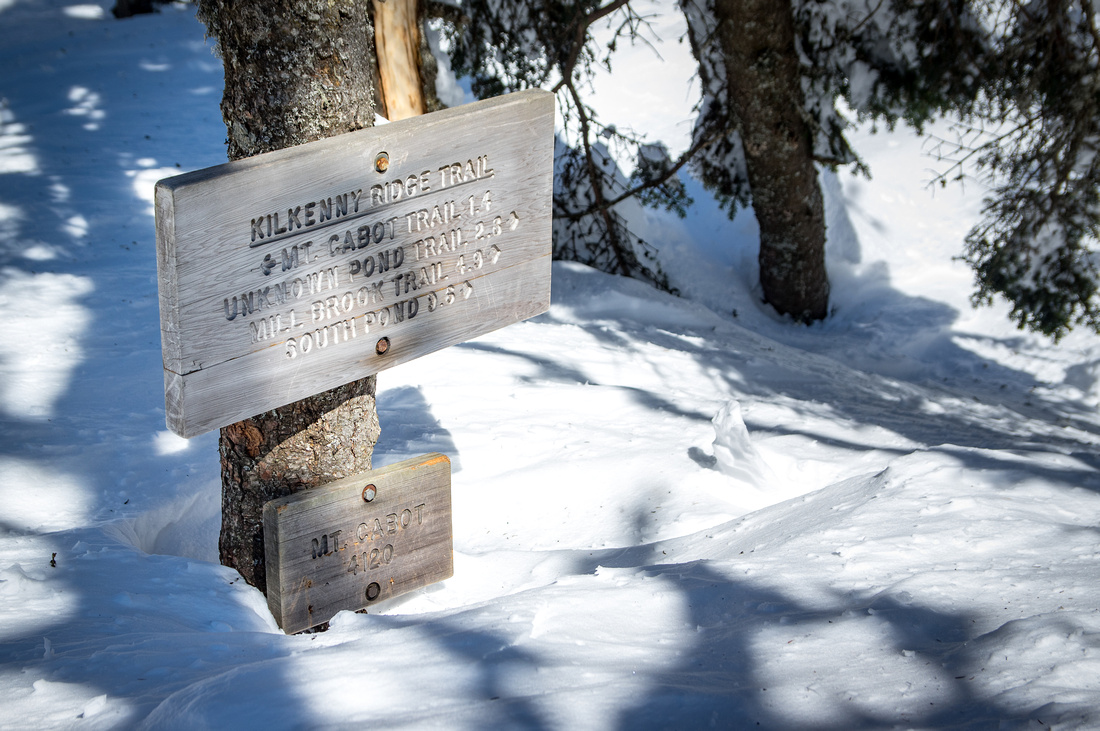 On the hike down, the skies continued to look exactly how they had the whole day. 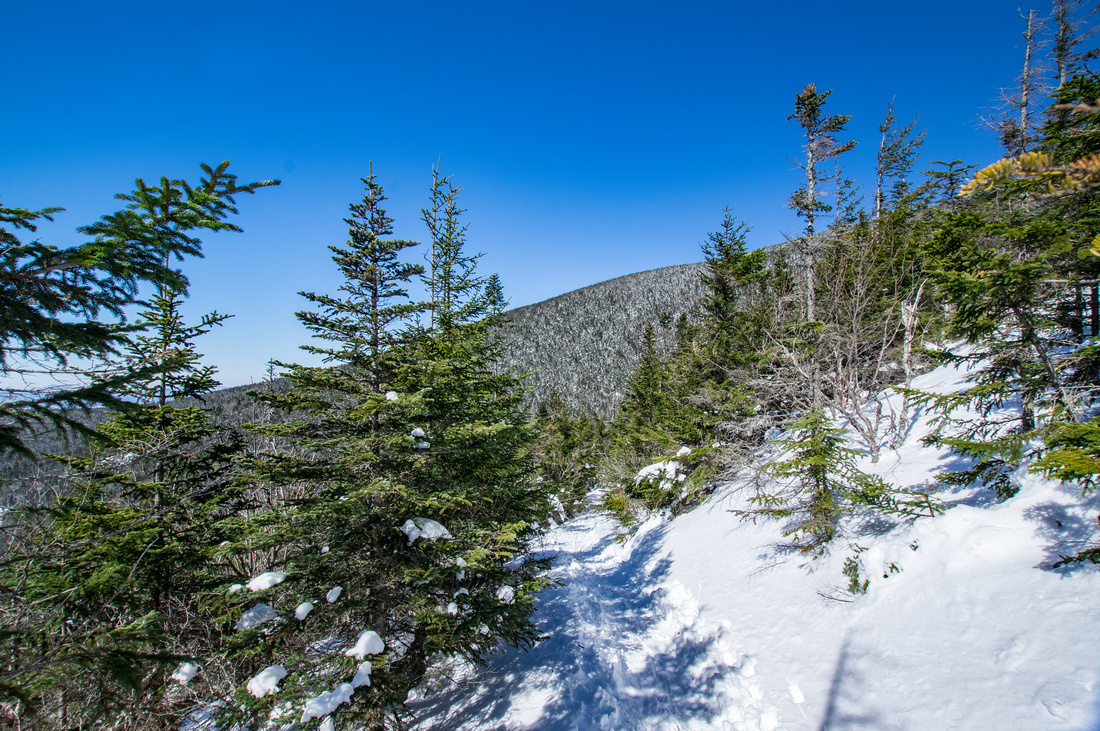 Once I was back on the bottom of the Bunnell Notch trail, I noticed my lengthening shadow in the afternoon sun. The backpack in the shadow looks like it would weigh as much as my actual pack felt like at this point! 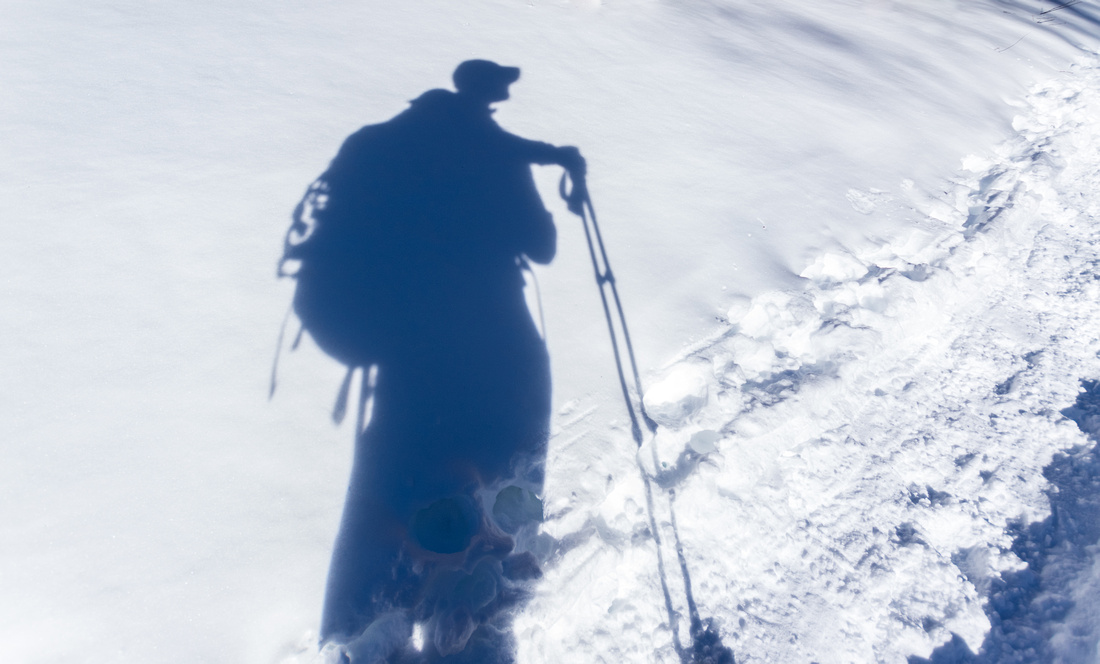 I had read, and therefor assumed, that this hike would be less traveled, and less busy than most.  I didn't think I'd see that many people at all on this particular outing even though the conditions were basically perfect. I believe I saw more people on this hike than I have on my previous three hikes combined. I ran into at least two dozen other hikers on this day as well as two super friendly dogs.  I arrived back at the truck at 2:20, exactly 7 hours and about 9.5 miles after starting.

Whether it's one of the more popular peaks on the list, or, what is for most of us, the furthest, most remote one to get to, every one of these mountains and hikes are so special to so many people. This hike was my 27th White Mountain 4000 footer hike, and my 45th peak.  Two more very special hikes remain to reach the final three peaks.