The forecast called for 'cloudy' conditions, which does not automatically translate to no views. Sometimes, those clouds are really high, and I've had fantastic views on previously forecasted cloudy days. Not to mention, on the ride up that morning, I had cloudy conditions, yet perfectly clear views of Mt. Washington and it's neighboring peaks.

The entire hike would be on the Signal Ridge Trail, off of Sawyer River Road. This road is closed in the winter months so I really wanted to get this hike in before that happens as it adds about 4 miles total to the hike due to the road walk to the winter parking lot off of Rt. 302. I would describe the hike in two basic phases. The first roughly two miles of the trail were a fairly flat, puddle-ridden, leaf-covered mud fest. The last 3 miles to the summit were relentlessly uphill covered in ice and more and more snow as you climbed.

After having to remove my boots, gators, socks and rolling up my pants over my knees to wade through the calf-deep water crossing (sooo cold!!!), the lower, post-fall like section of the trail starts to transition into the early winter part of the trail. 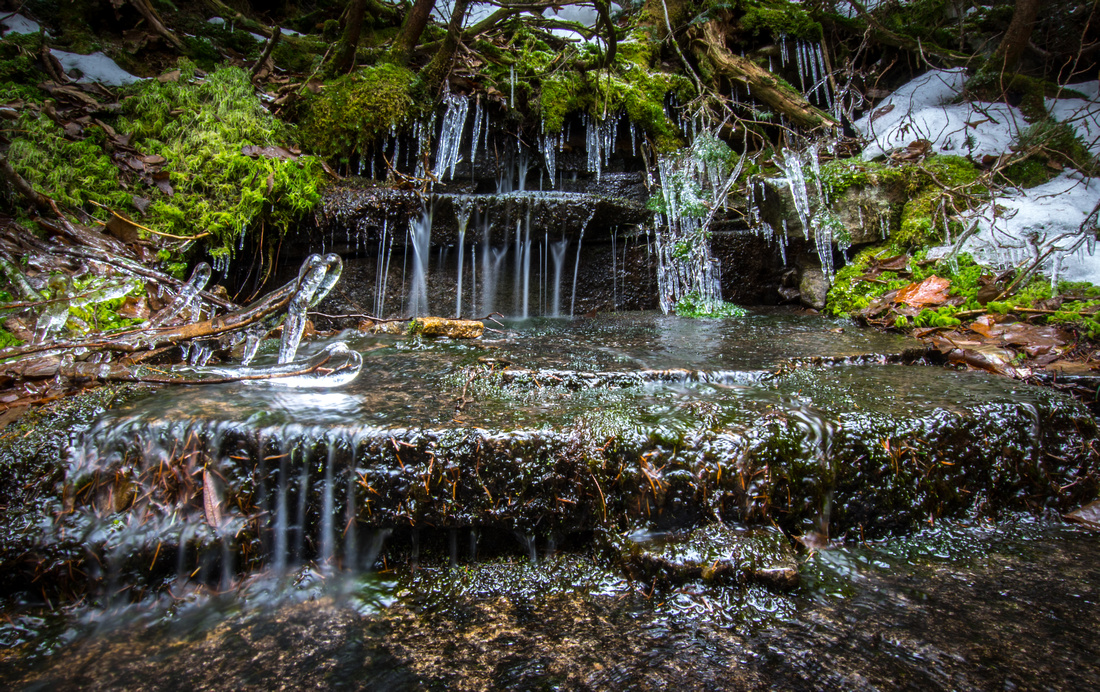 Snow, mixed with running water, mixed with ice cycles flowing over a natural cascade along the trail. While the trail does make some switchbacks, and a go through a few flatter sections, it's essentially a never-ending steady climb all the way to the summit. On this day, I would run into one hiker at the very beginning of the hike going in the other direction, I suspect that person didn't want to wade through the stream, and I didn't see another hiker until reaching the summit about 5 miles later.  Prior to reaching the summit, the trail rolls along for about a 1/2 mile above tree-line with what appeared to be a massive drop-off on the right hand side of the trail. 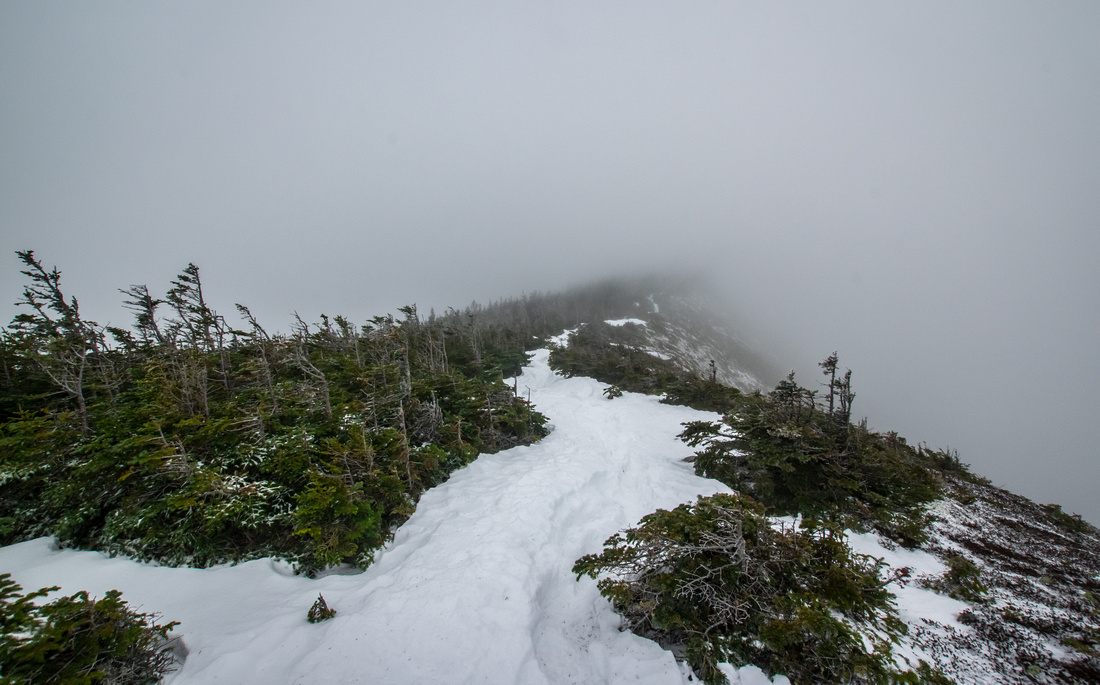 The snow drifts in some spots along this stretch were over waist deep, yet frozen solid. No snowshoes required as you can hike and walk on top of it without any issues at all. And, this next image was a first for me, and I didn't notice it until I was hiking back, but on the left side of the trail on the way to the summit, look what I saw. Or, more accurately, look what saw me... 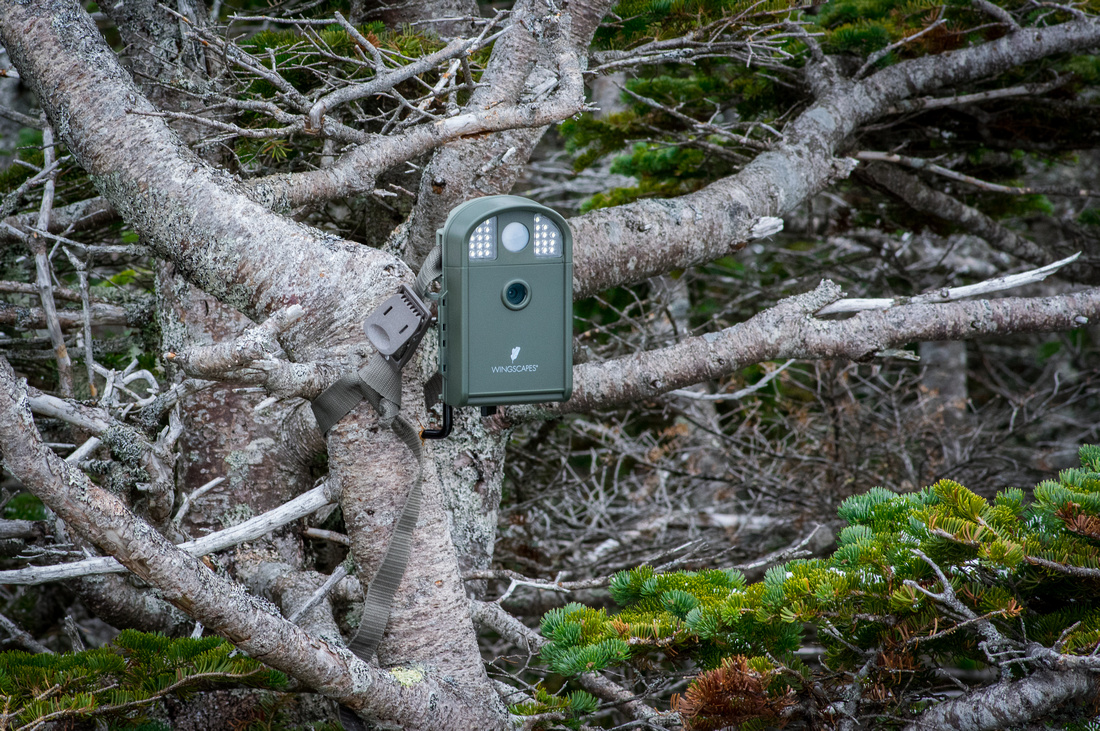 Smile! Someone is watching hikers. A basic trail camera attached to one the stunted trees, slightly less than a mile from the summit.   Not long after you get your picture taken, you quickly drop back down into the forest, and as you approach the the final push to the summit, and the fire tower, this is what the trail and woods currently look like. 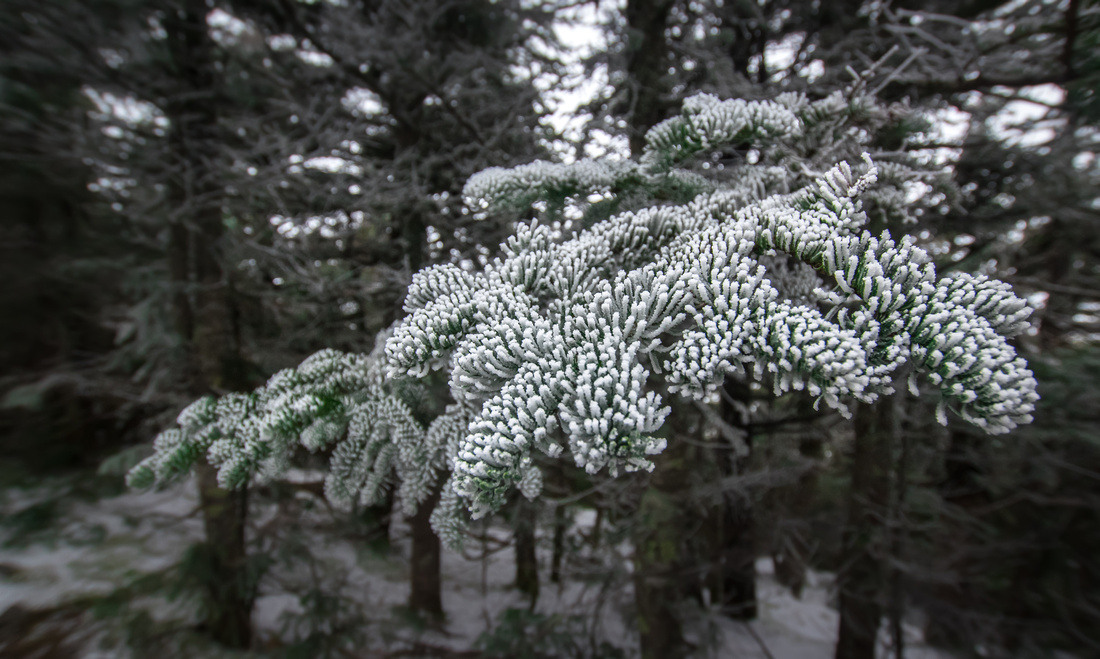 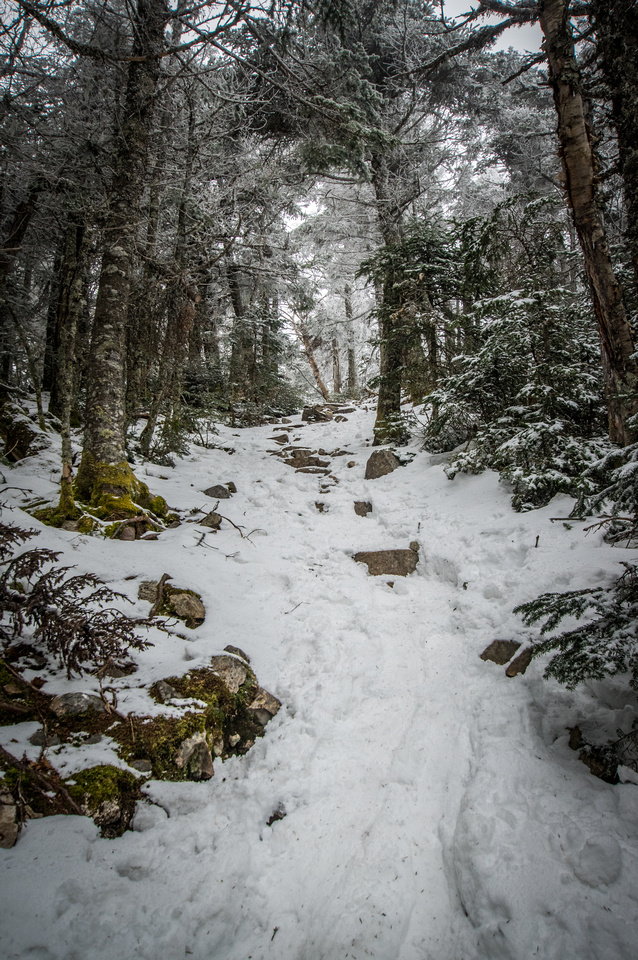 Just before meeting up with three other hikers at the base of the fire tower as they were headed back down, the wind picked up considerably, and to no surprise, the temperature dropped dramatically. I put on a few more layers, left the backpack at the base of the tower, and started the icy, incredibly windy climb to the platform.  Here's what the fire tower looked like.  Check out those views from the top!! 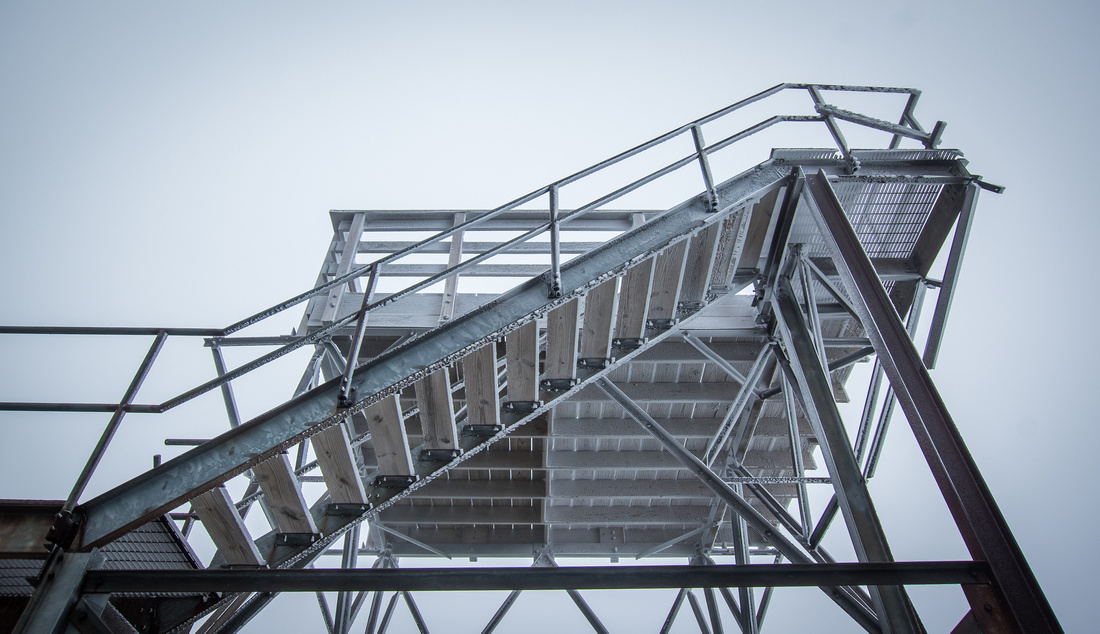 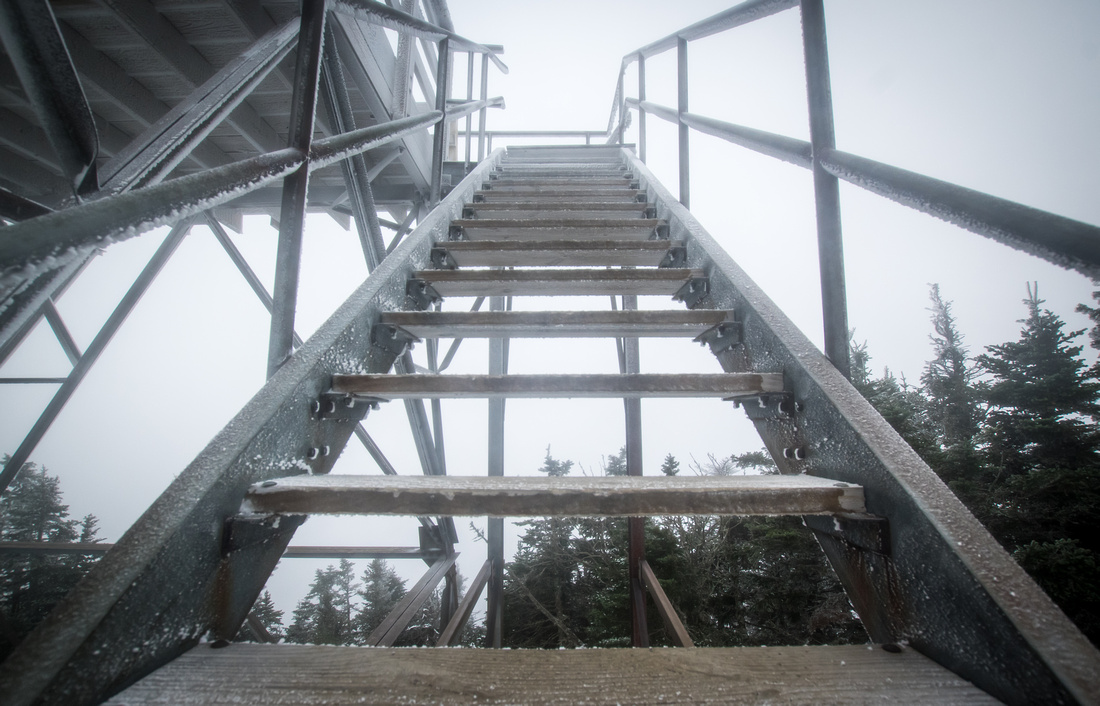 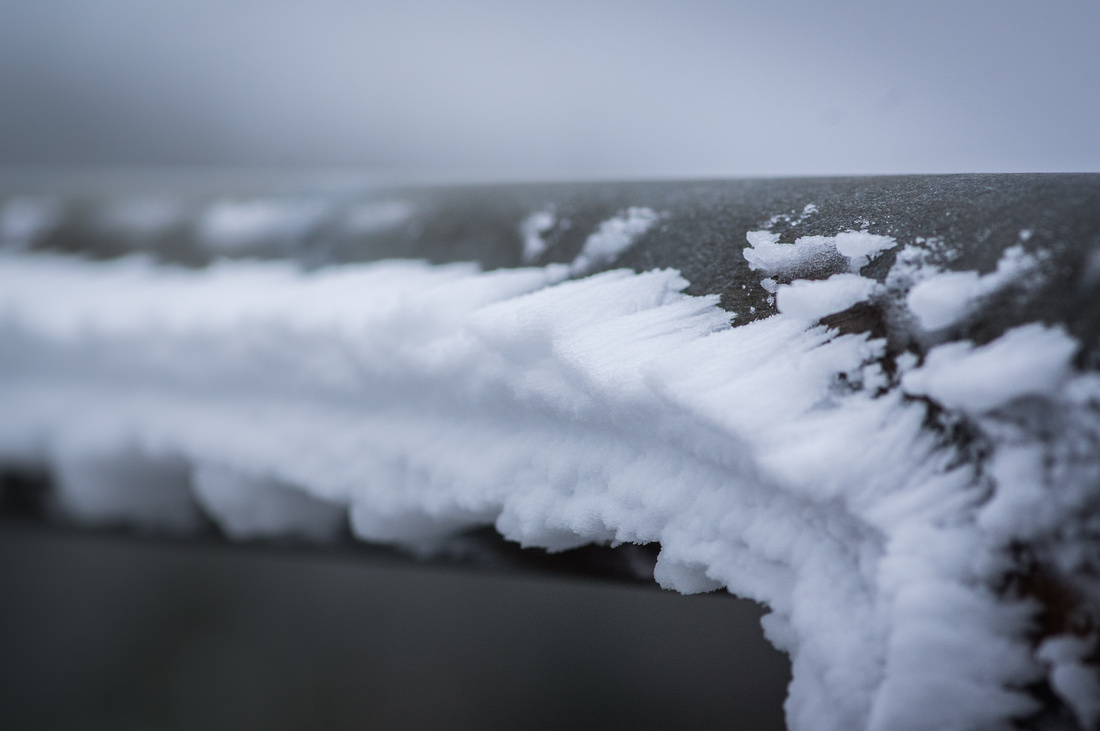 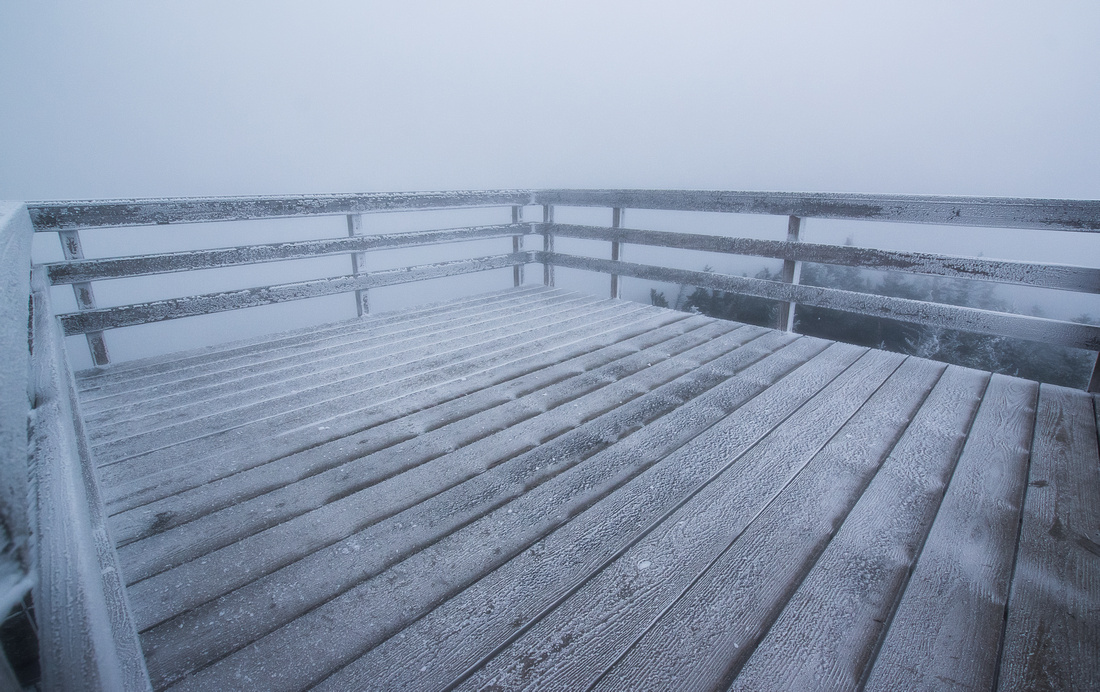 The wind was out of control on the platform! I was able to take about three photos and then the autofocus froze on my camera, the lens iced over and rime ice was forming on my legs all within about 30-45 seconds.  Time to climb down!

Under the fire tower, is the official summit marker for Mt. Carrigain. 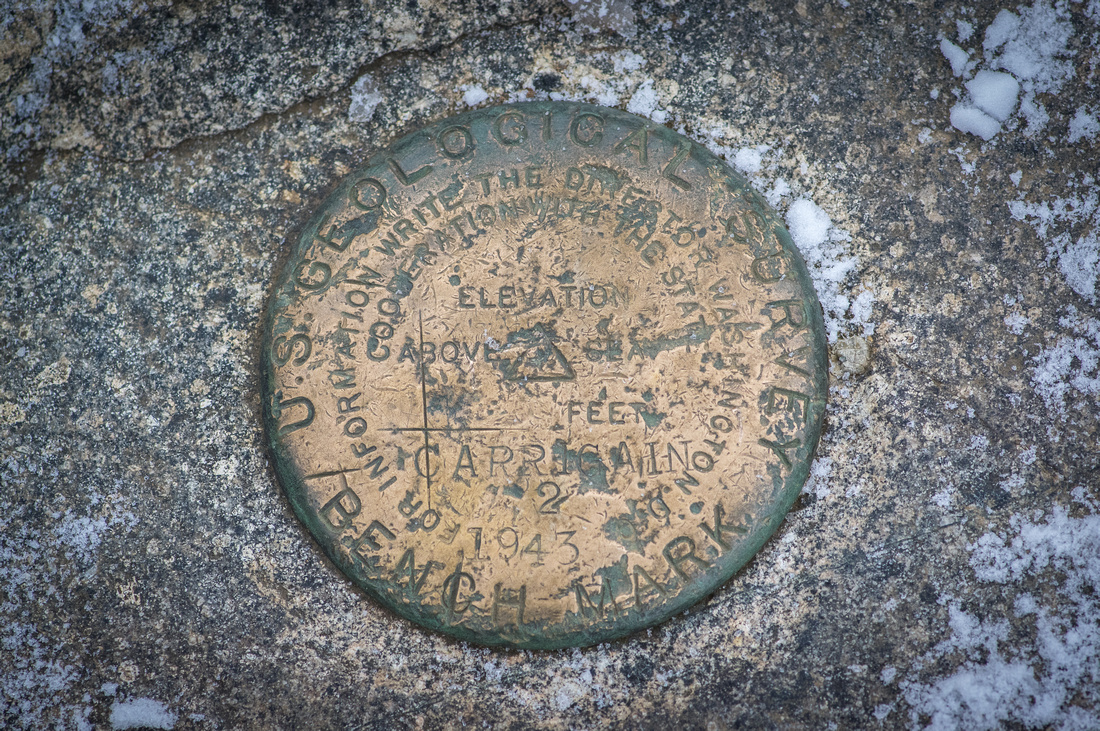 At this moment in the hike, I was feeling pretty disappointed to have successfully made it to the summit, only to have zero views. I defiantly stomped on the rock as if to say "I still did it! Views or no views!"  I hiked non-stop for the next two miles back down the trail, and took a lunch break where it was much warmer.  At the end of the hike (or beginning) on the Signal Ridge Trail, Whiteface Brook runs tight to the trail and was really flowing hard on this day. One last photo on the way out of a small pour-over into a beautiful pool. 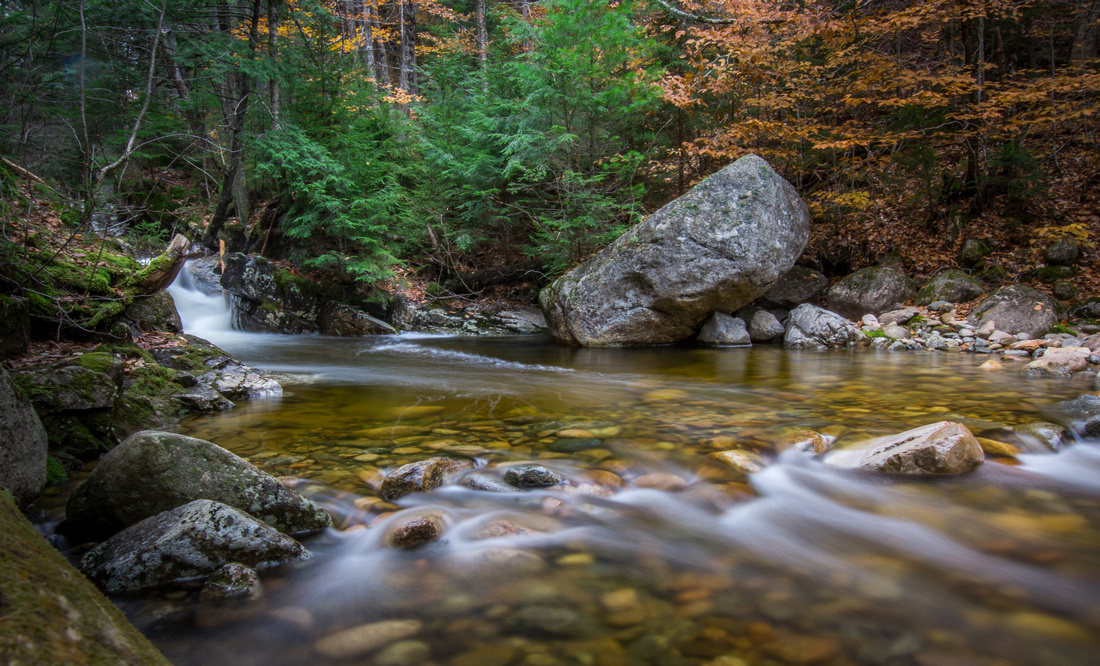 So, where does the word appreciation in the title come from? After all, it wasn't a particularly unique trail. I had to wade through an ice cold stream. I physically struggled on this hike especially on that final three miles of relentless uphill to the summit. I barely met any other hikers, and I had the worst views of any hike I've ever done, and I had a 4 hour ride back home in heavy traffic.  All that is true.  What is also true, is that I spent an entire day outdoors. While dealing with a greater than usual amount of physical struggle on this hike, I did make it to the summit and safely back to the truck quicker than I had planned. On all of my hikes, I can honestly say that I get a tangible feeling of pride and self-reward on the trip home. This hike would be no different. Views or no views, I did successfully summit my 38th 4000 footer. Views or no views, I did successfully get one peak closer to my ultimate goal. Views or no views, I absolutely do appreciate what I accomplished on this hike.