On Sunday, September 2nd, I continued with my quest to hike all of New Hampshire's 4000' peaks by summiting Wildcat D and Wildcat A, peaks number 29 and 30 out of 48 for me.  Along the route, I also reached the peaks of Wildcat E, C and B, but only the A and D peaks count as official 4000 footers.

When choosing which trails to take and which route to complete my hikes, I prefer loop hikes or at least some percentage of not doing a literal out-and-back on the same exact trail. I also really enjoy visiting mountain ponds and lakes whenever possible as they tend to provide amazing photo opportunities, as well as a welcome break to ascending and descending over countless boulders that is hiking in The Whites. I've previously visited Lonesome Lake, Garfield Pond, Star Lake and Greeley Ponds to name a few. On this hike, I would be incorporating Lost Pond, and the Lost Pond trail at the beginning of the hike.

After just having completed my Owl's Head hike only 8 days ago, knowing how long of a ride it was for this Wildcat hike and concerned about having to deal with holiday weekend crowds, I have to admit, I came very close to canceling this hike. However, with such a perfect mountain forecast (rare!), and no real opportunity to hike again before mid-October, I decided to stick to the plan. The sound of the 3:15am alarm had me quickly rethinking that plan!  But, I did manage to get myself up, have the truck packed and be on the road by about 3:40am.

As I got closer to White Mountains, the clouds really started to thicken. Visibility was getting worse, and it even started to sprinkle as I drove through Franconia Notch.  Then, as only it can seem to do in The White Mountains, I turned onto Rt. 3, and was greeted by blue skies, and a rising sun that was casting some great light for the rest of the ride to the trailhead.

Upon arriving at the Joe Dodge Lodge in Pinkham Notch, I was actually surprised to find the lot just down the street only had a few cars in it. The first big benefit of getting up stupid early. After a quick walk down the road to the trailhead to Lost Pond, it took no time at all to see the real benefits of that 3:15am alarm. This was the view just as the trail starts across from the lodge along a small swampy area. You can still make out Rt. 16 in this picture. 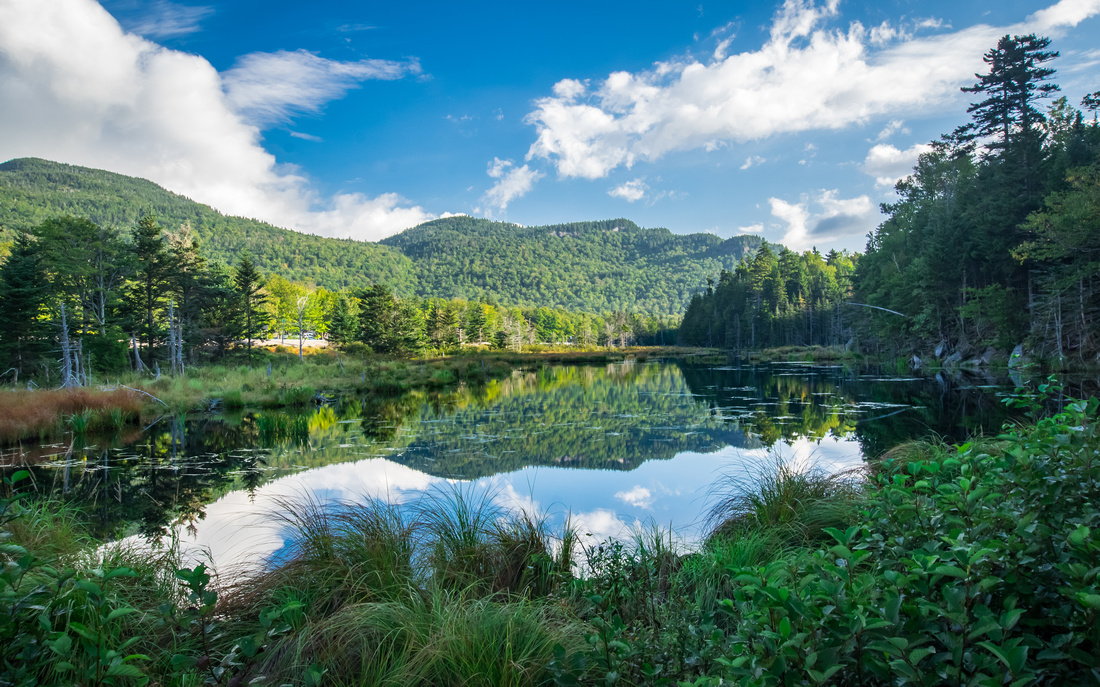 You soon enter the woods and start a silent hike up to (yes, up to) Lost Pond.  At one point, as you're going up a small incline, you can see the opening to the trees in front of you and know that the pond lies ahead.  The views that I had from the pond were some of the best I've had on any hike.  Completely calm waters, perfect early morning light, and clear skies. That 3:15am alarm was now the best thing that could have happened. I have said this before, but these photos do not do these views any justice at all.  They really were much better in person. 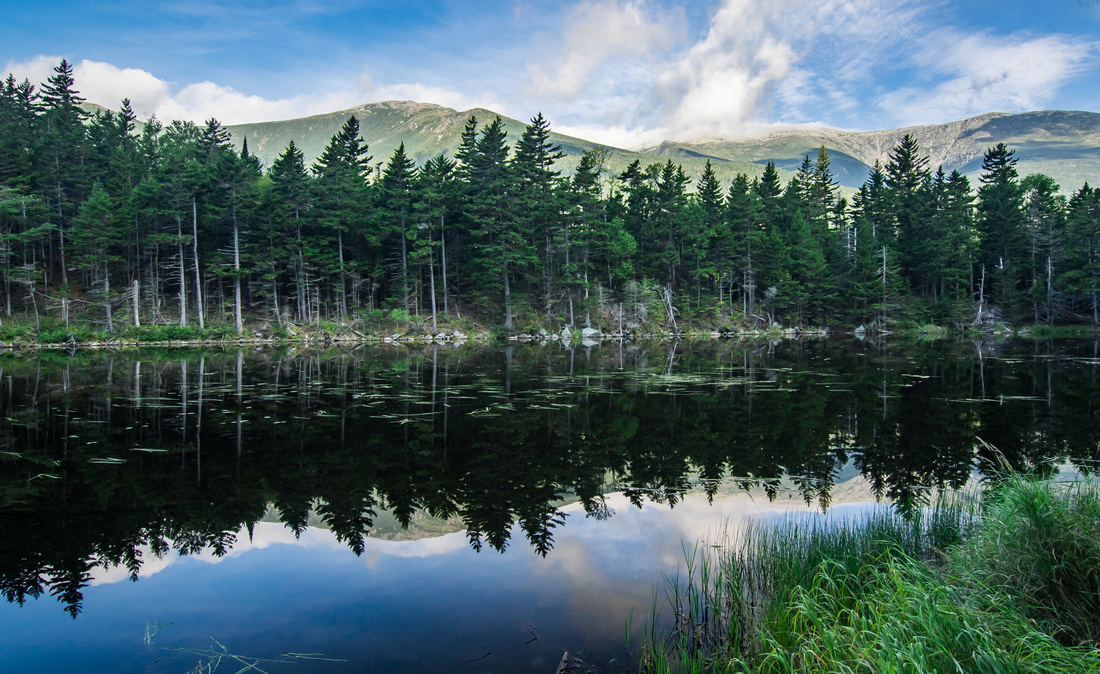 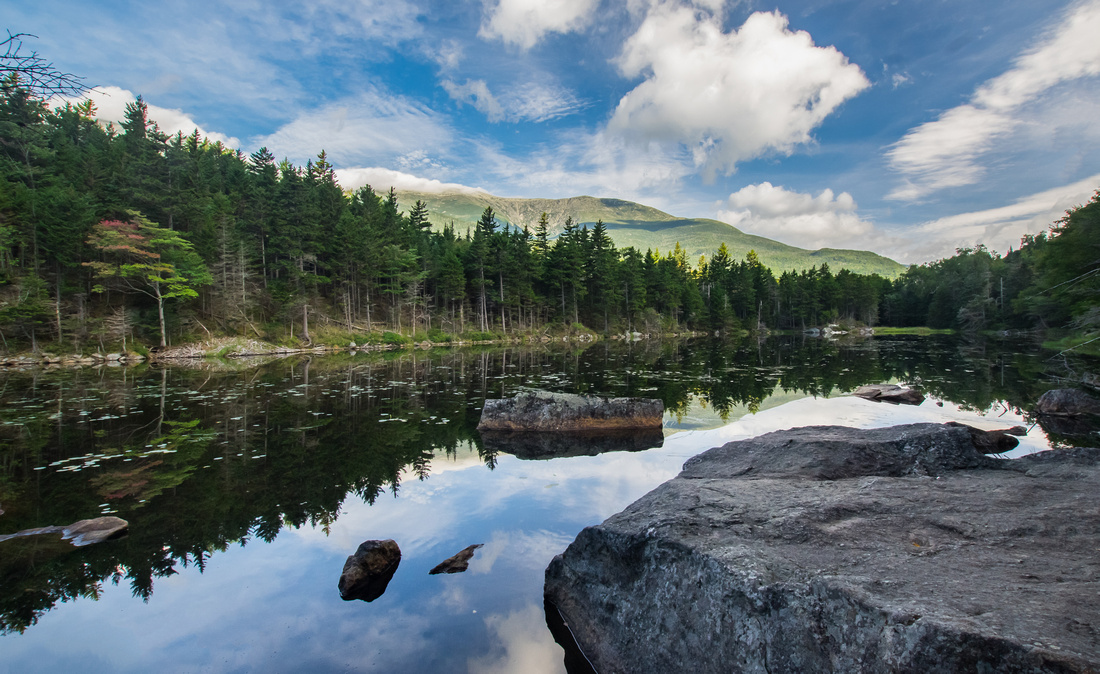 I spent at least 30 minutes walking the eastern banks of this pond, shooting tons of images with Mt. Washington and the northern presidential range reflecting in the calm waters. This one above was my favorite from the morning. I also brought along a small zoom lens and was able to capture some close ups including this one of Huntington Ravine. 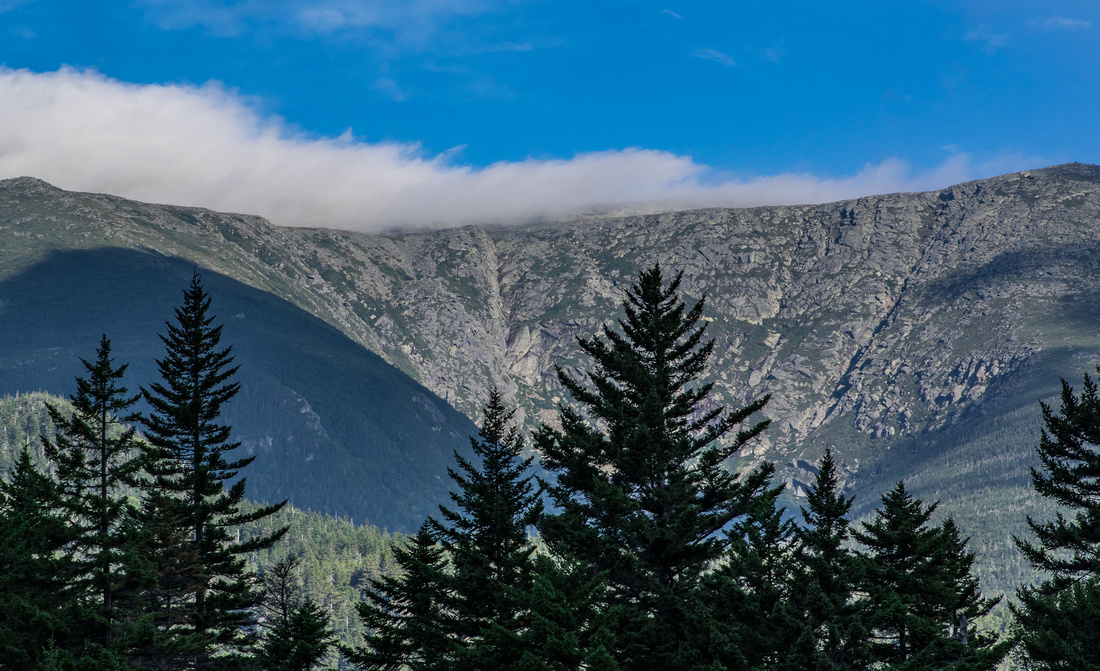 I was honestly in no hurry to leave this beautiful spot, but I had miles of difficult hiking ahead of me, and the roughly mile long hike on the Lost Pond trail was also my warm up for the next trail - The Wildcat Ridge Trail.  This trail is known for climbing steeply and quickly right off the start, and that it did. Just after turning left at the intersection with the Lost Pond Trail the real hike starts! 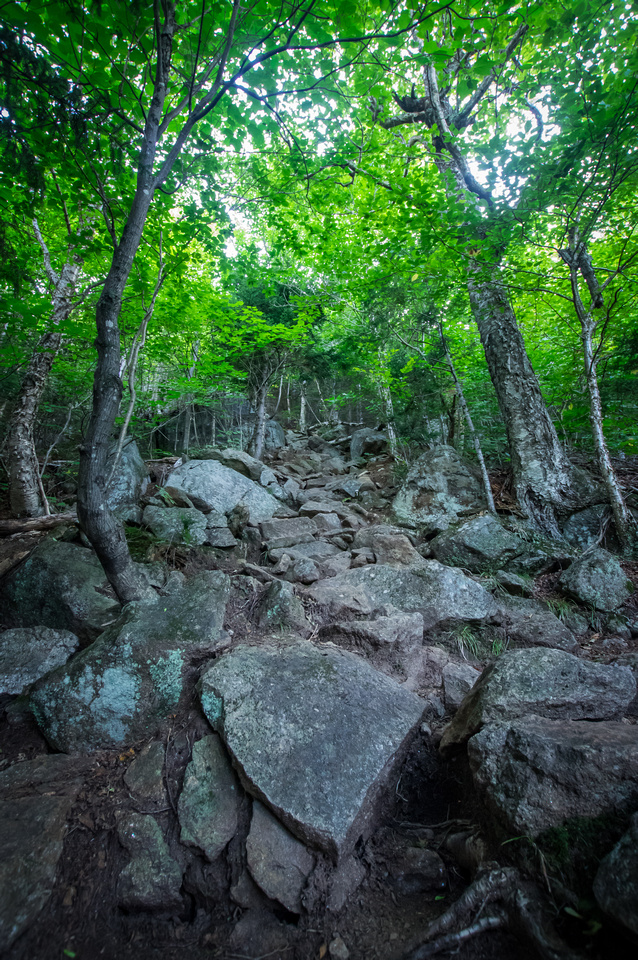 While this was one of the more difficult trails I've ever hiked, I distinctly remember saying out loud "I love this trail!".  This was true for two reasons. One, I had read so much about how difficult this trail was,  I think I had convinced myself it would actually be dangerous - it wasn't.  And two, the views! Many sections of this trail are far better described as rock climbing, not hiking.  However, after just about every one of those sections, you ended up on a lookout of some sort that offered views that are on par with those from Garfield, and the Bonds and the Franconia Ridge.  As you can see below, difficult rock scramble to the right (yes, that's the trail), and amazing view off to your left. 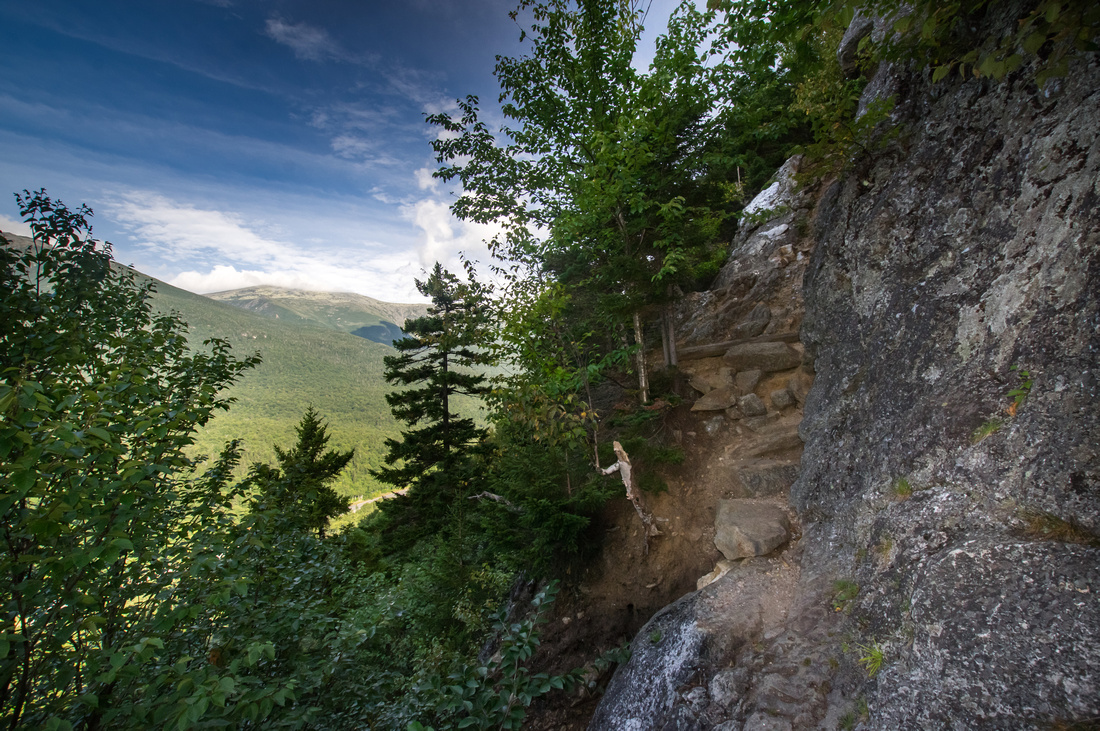 And your reward for completing the latest hard section.... 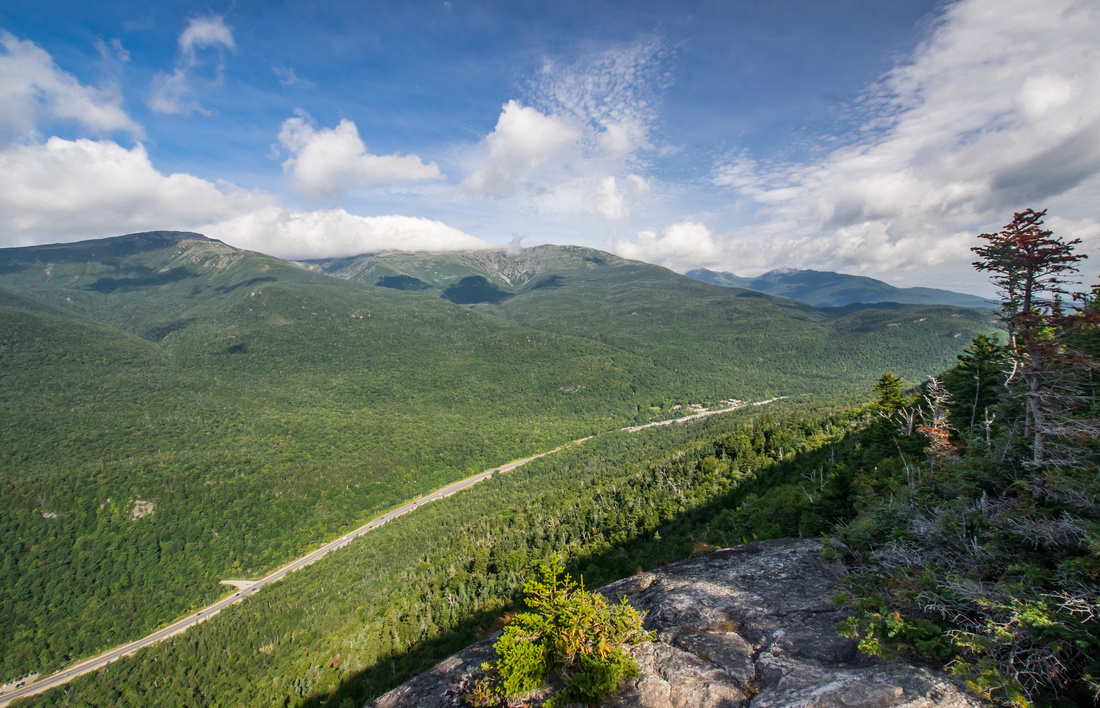 After some time spent speechless at this particular view, it was on to the next difficult section of trail. The camera can't really replicate how steep this is... trust me! 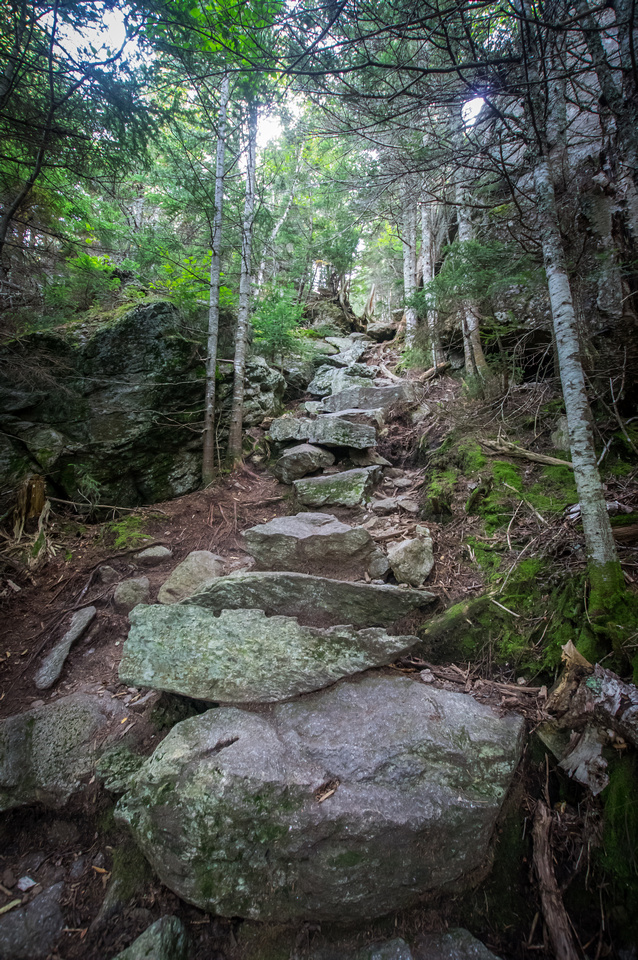 Yet, as much as this trail takes out of you, the views continue to give back. 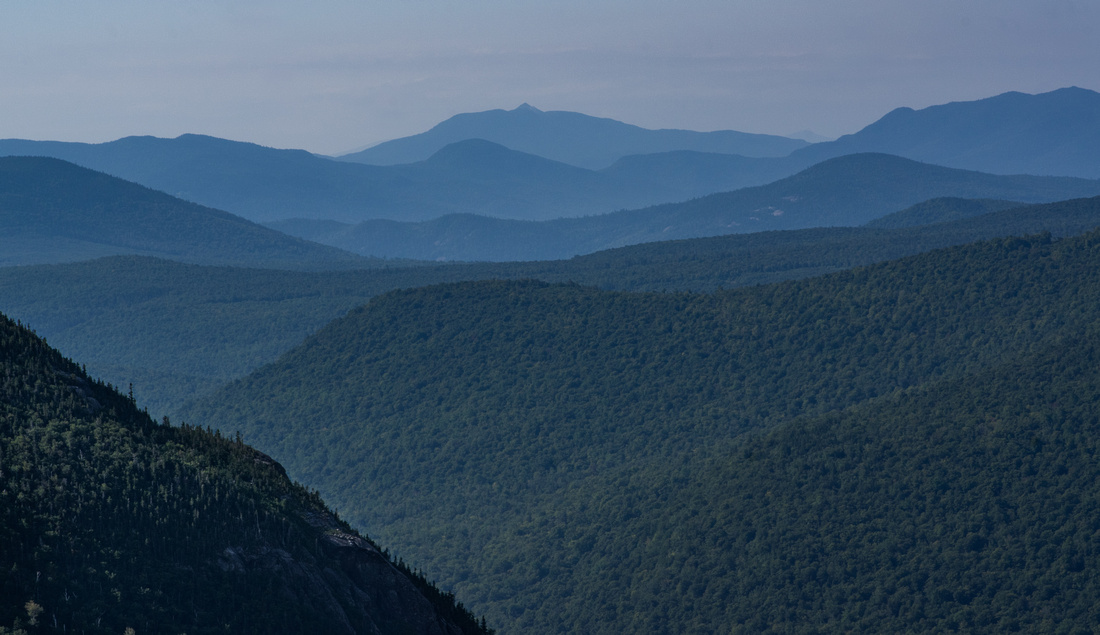 One final scramble up these wooden steps embedded into the rock leads to a ledge with the best views so far of this hike. 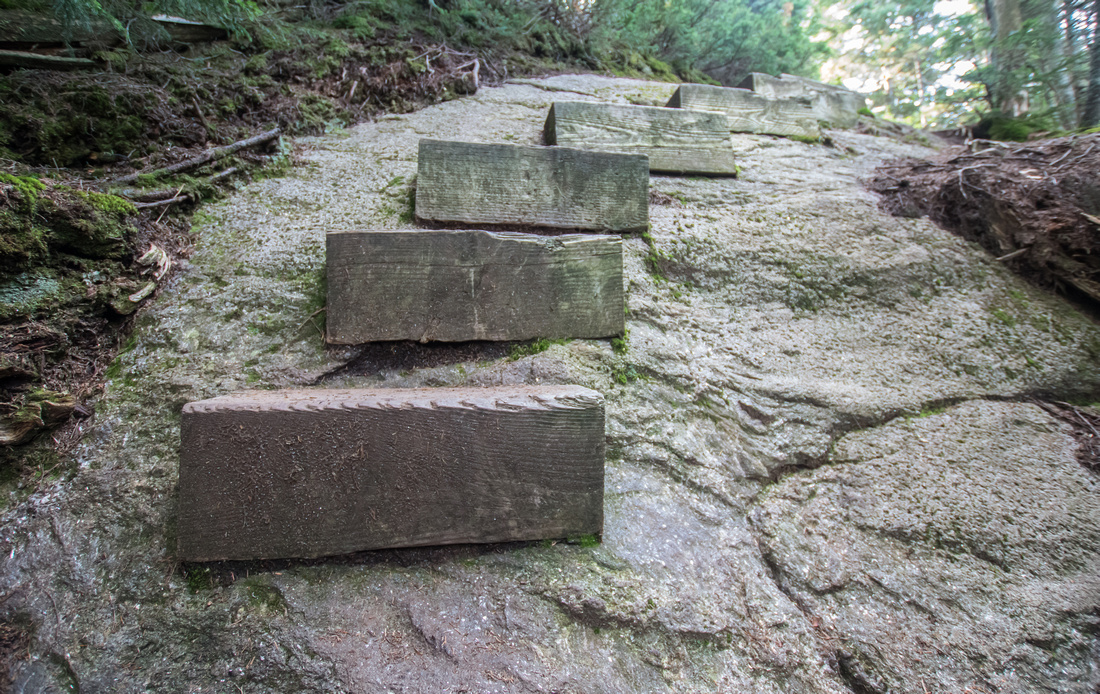 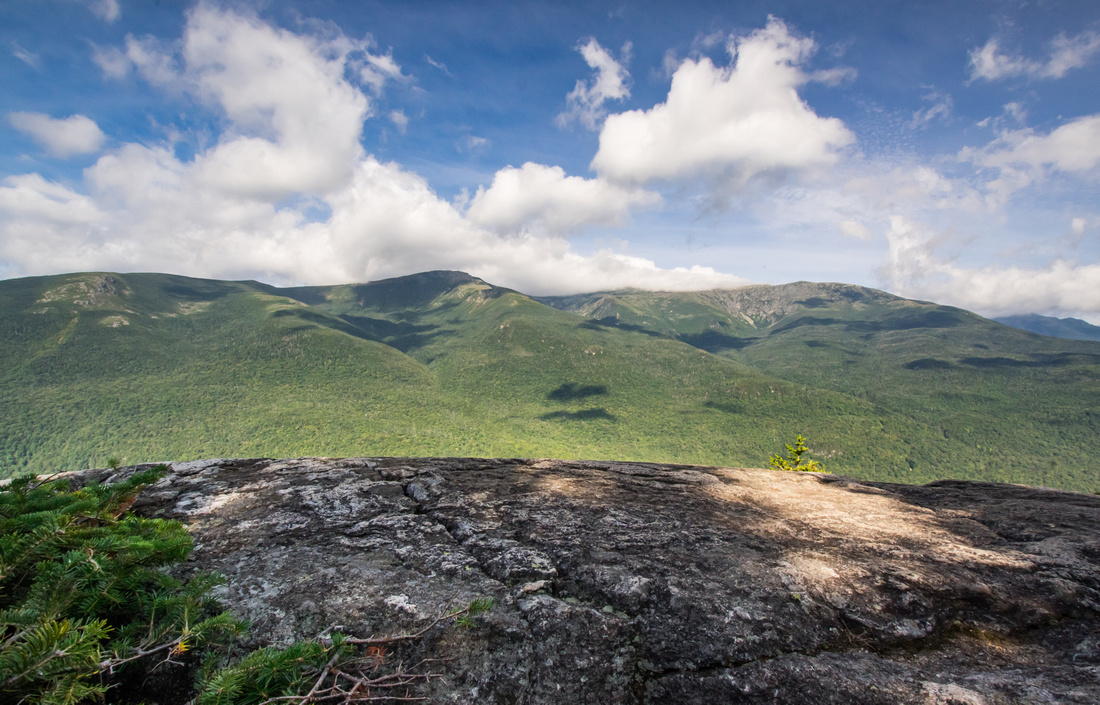 From the point at which I turned left onto the Wildcat Ridge Trail, it is only about 1.5 miles to the summit of Wildcat D. Just before reaching the summit, the trail exists the woods to a small clearing where the top of the gondola ride from the ski area drops people off. This next photo was taken with the gondola ride just off to my right. 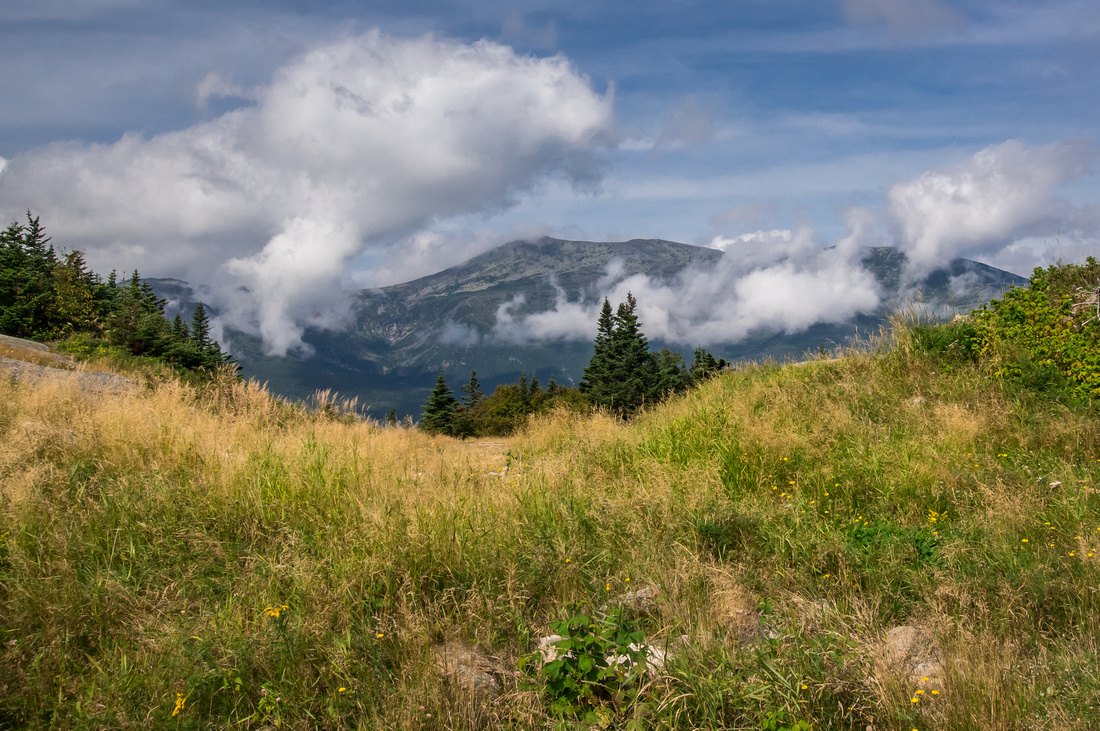 It is a very short walk from where this picture was taken to the lookout tower on the summit of Wildcat D. Once again, the views did not disappoint. 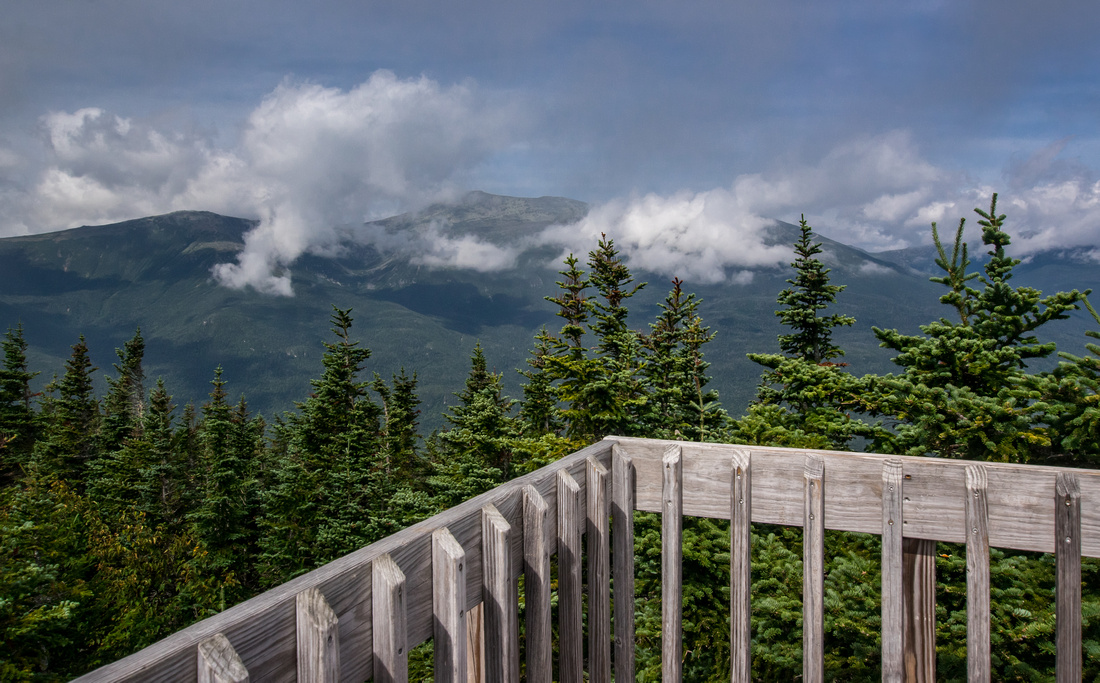 The summit was really busy with gondola riders so I only stayed here long enough to take a few pictures, and take a quick drink.  It was time to make my way to the second peak of the day, Wildcat A.  As much as there is written on the difficulty of the trail between the trailhead and this first summit, I honestly found the stretch between the two summits to be worse.  Immediately after leaving the lookout tower the trail starts off with an extremely steep downhill section, and for the next 2.5 miles the trail alternates from severely up to severely down over and over.

While mostly a wooded hike between the summits... 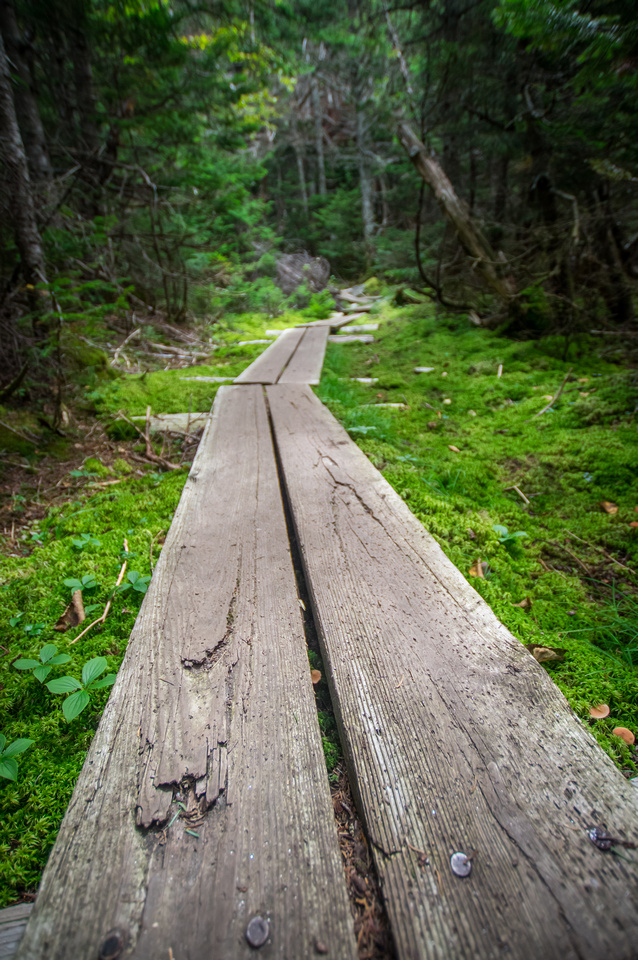 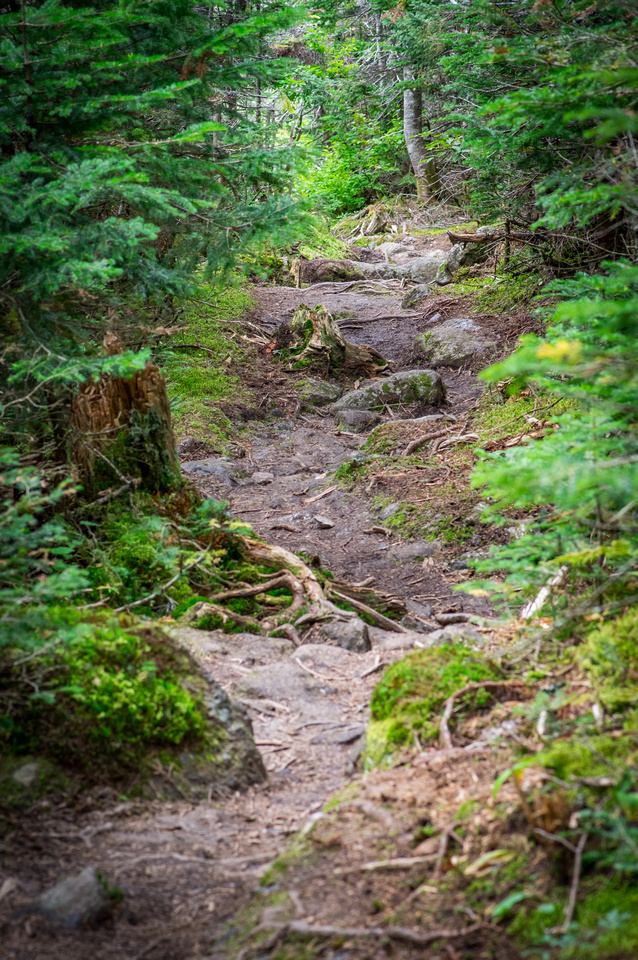 ...there are several sneak-peak views along the way, such as this one of Mt. Adams. 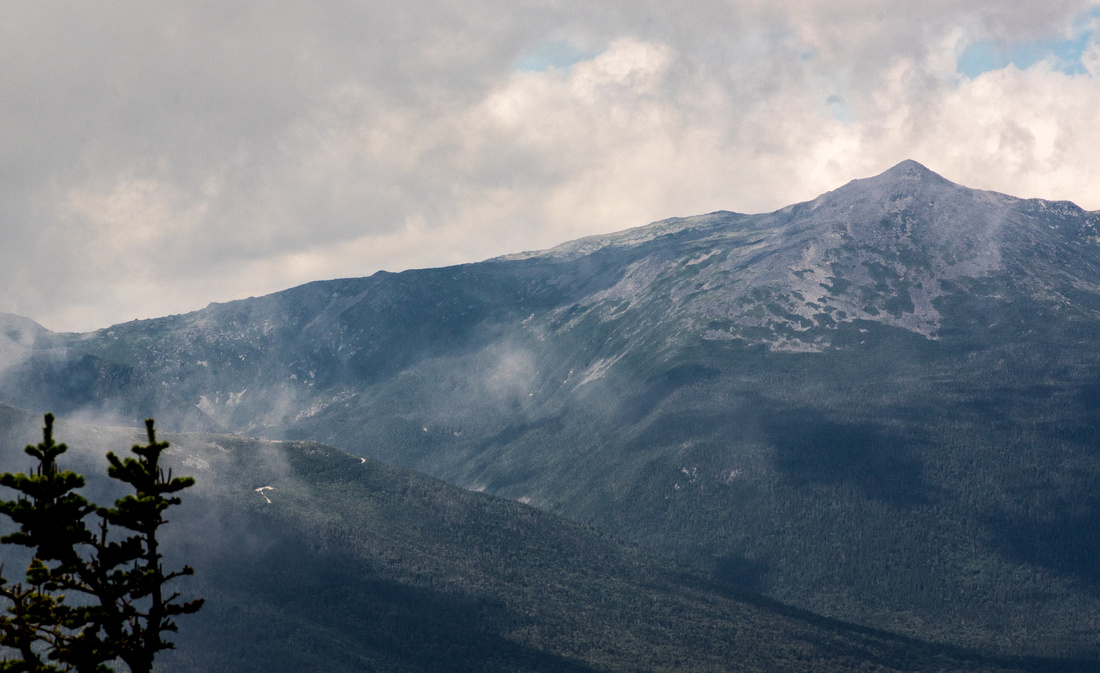 Once at the summit of Wildcat A, there's a small ledge with a straight down view of the Carter Notch Hut. I was lucky enough to arrive just in time to snap this picture. Five minutes later, and for the next 30 minutes that I stayed on the ledge, the clouds in this valley never cleared again.  (3:15am alarm pays off again) 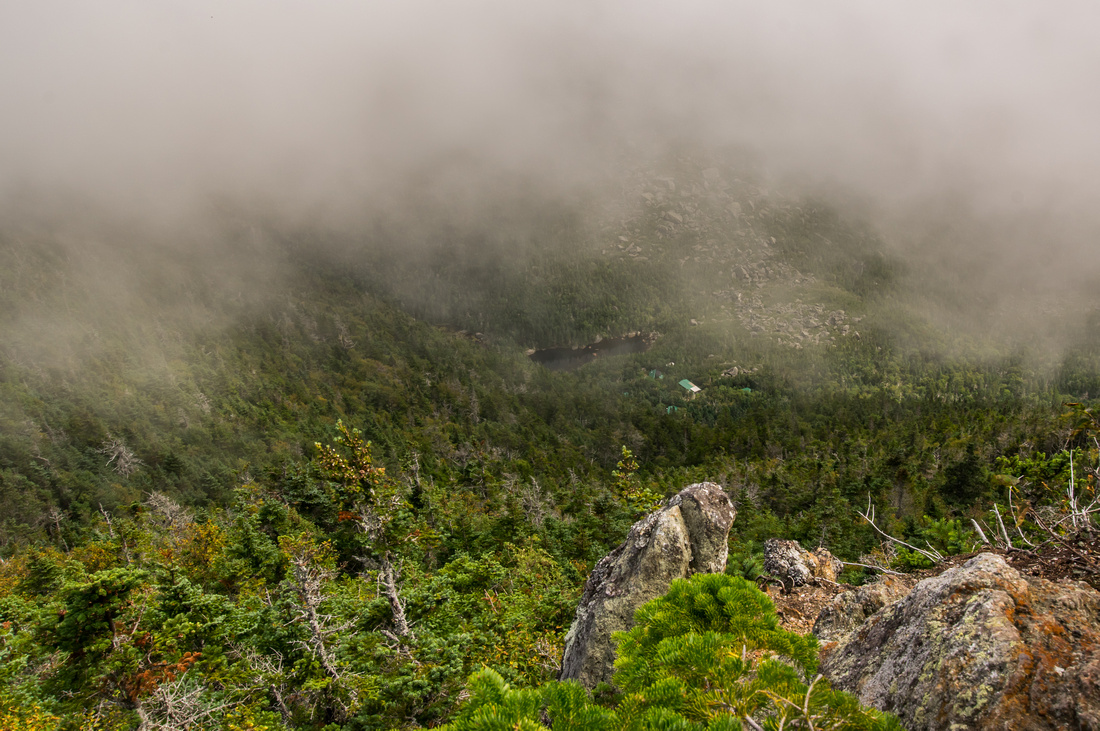 After resting my feet, eating my lunch, and enjoying the ledge, I made my way back to Wildcat D to start my descent on the Pole Cat ski trail. This trail is the outer most trail down Wildcat ski mountain.  In the summer, it's as wide as a road, covered in wildflowers, and has constant views with every step you take. 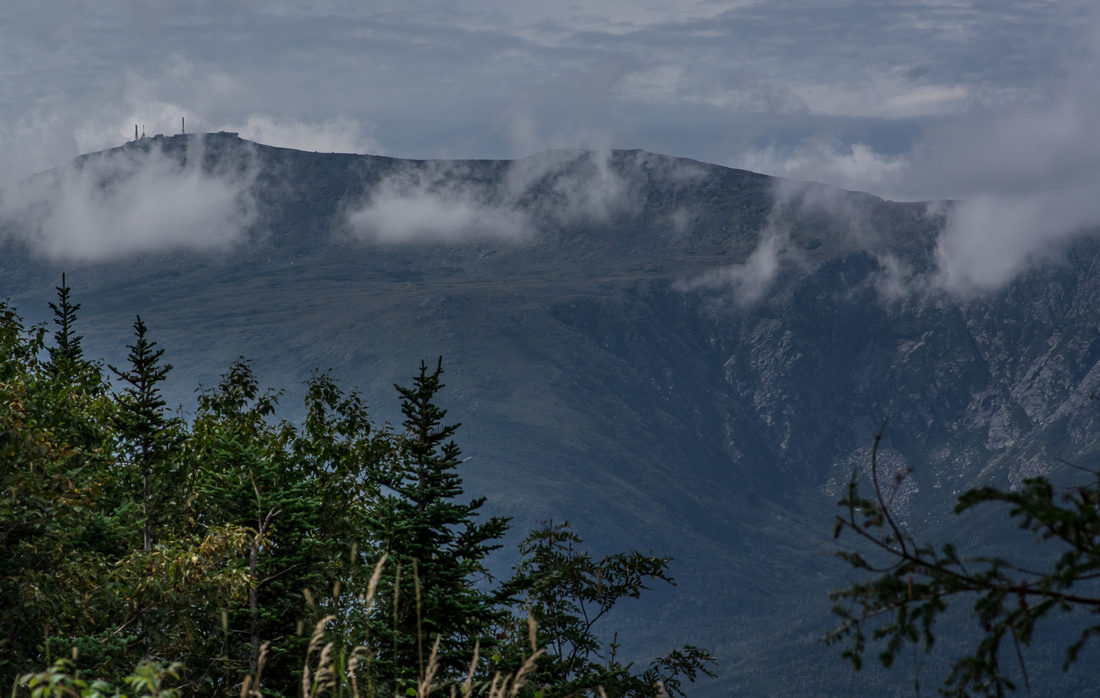 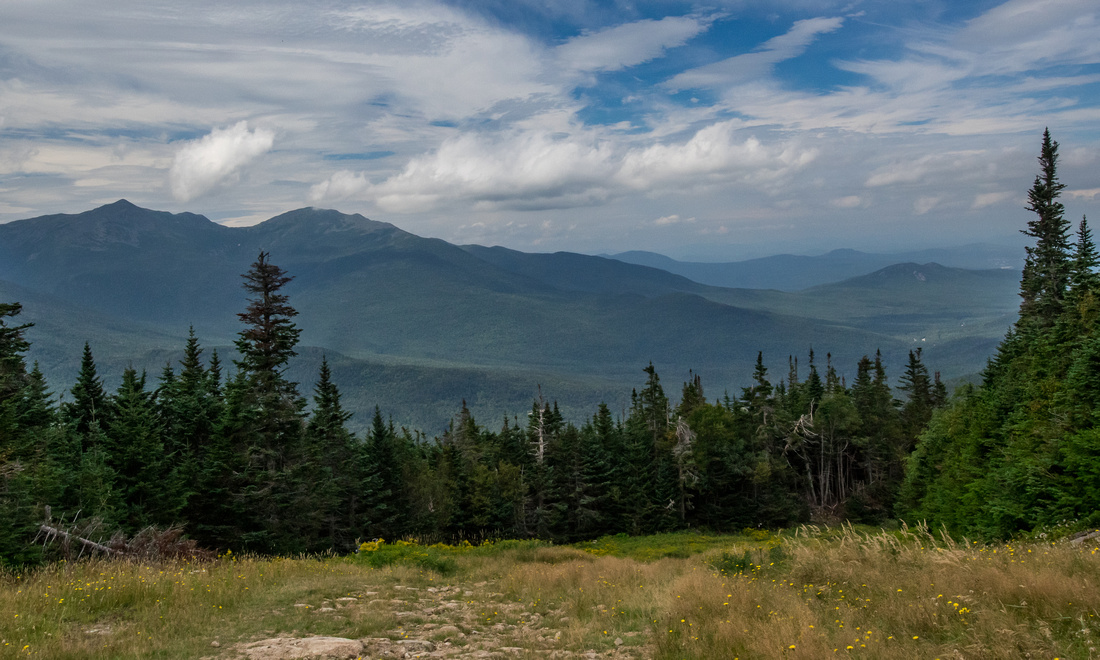 On this day, I was lucky enough to be here at a time when the monarch butterflies were everywhere!  While this ski trail seemed to be an easier way down, and something different, from the Wildcat Ridge Trail I ascended on, it is not easy on the feet or legs. Every single step you take is down. Which, makes sense, it's a ski trail, can't exactly have any flat or even small uphill sections. So, while constantly needing to take a break, mostly to stare at these views, but also to really give my feet some relief, I would just sit on the ground and let the monarchs land around me.  It made for some great photo opportunities I hadn't planned on at all. 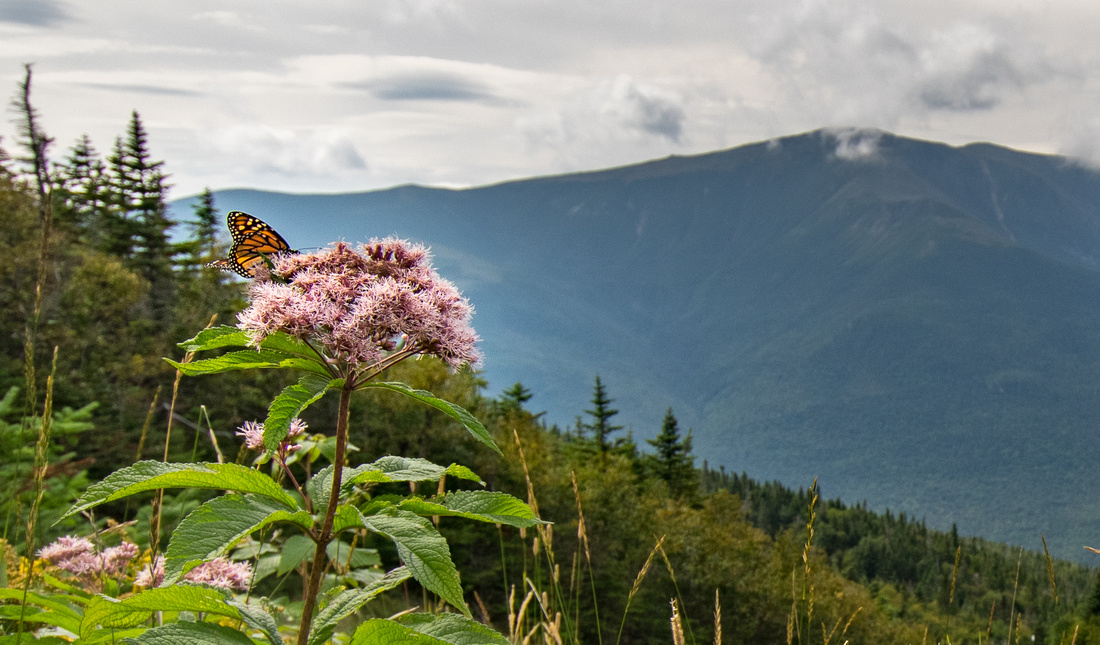 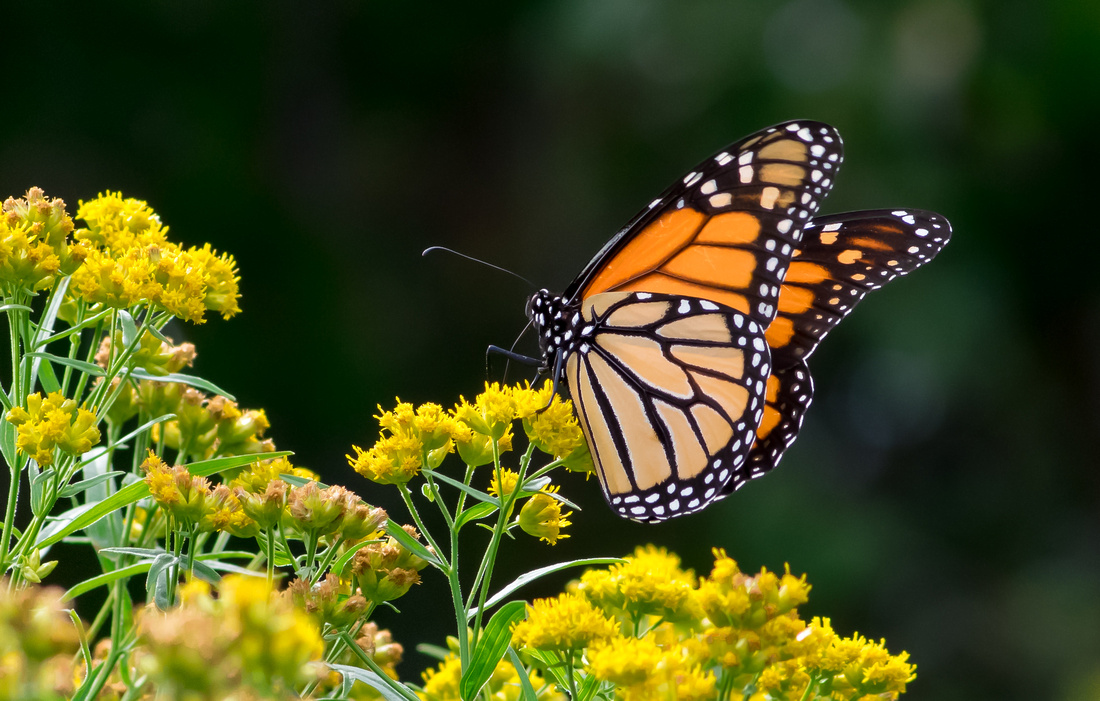 I eventually made my way to the bottom, filled my now empty water bottle inside Wildcat Lodge, and began the slow mile-long road walk back to my truck. One other experience I had on this hike worth mentioning.  The Wildcat Ridge Trail is also the Appalachian Trail. And, at this time of year, in the northern presidential range, there's a good chance you'll cross paths with a thru-hiker. On this day, I ran into three of them - all destined for Mt Katahdin in Maine. The finishing point for any north-bound thru-hiker. It was amazing how excited they all were to 'only' have a little over 300 miles left to complete their journey. I also found it somewhat justifying that while I was catching my breath at around mile 5 for me, they confirmed that the NH section of their 1800 plus miles was by far the most difficult they've experienced.

Once back at the truck, I decided there's no way to make an almost 4 hour ride home go by quickly. So, I stopped for a well-earned dinner, and took a scenic route back through the Kancamagus back to Rt. 93.  Not the fastest way, but absolutely the most enjoyable.

It's not too often you're thrilled to have woken up around 3am, but on this day, I was beyond thankful that I did.