And then there was one.

On Sunday, March 17th, myself and my two friends that have joined me on several past hikes including all-but-one of my six winter hikes this season, made the long ride to the Rocky Branch Trailhead in an attempt to hike to the summit of Mt. Isolation. This summit is very aptly named, as it is one of the most remote peaks of the NH 48 and the second shortest at only 4003 ft.

In winter, this hike involves a section that is referred to as the Engine Hill Bushwhack. A roughly 2-1/2 to 3 mile hike along an unmarked trail from the Rocky Branch Trail to the Isolation Trail. This route not only eliminates about two miles off the round trip hike, but it also bypasses several water crossings, which could be impassable in winter.

The early part of the hike was a very slow, gentle incline, on an extremely hard-packed trail. We only needed our spikes, giving our snowshoes a ride for the first 3+ miles. The air temperature was very cold, once again, but as was the case with all our previous winter hikes, we had perfect blue skies, a warming, rising sun and little-to-no wind, at least at these lower elevations. 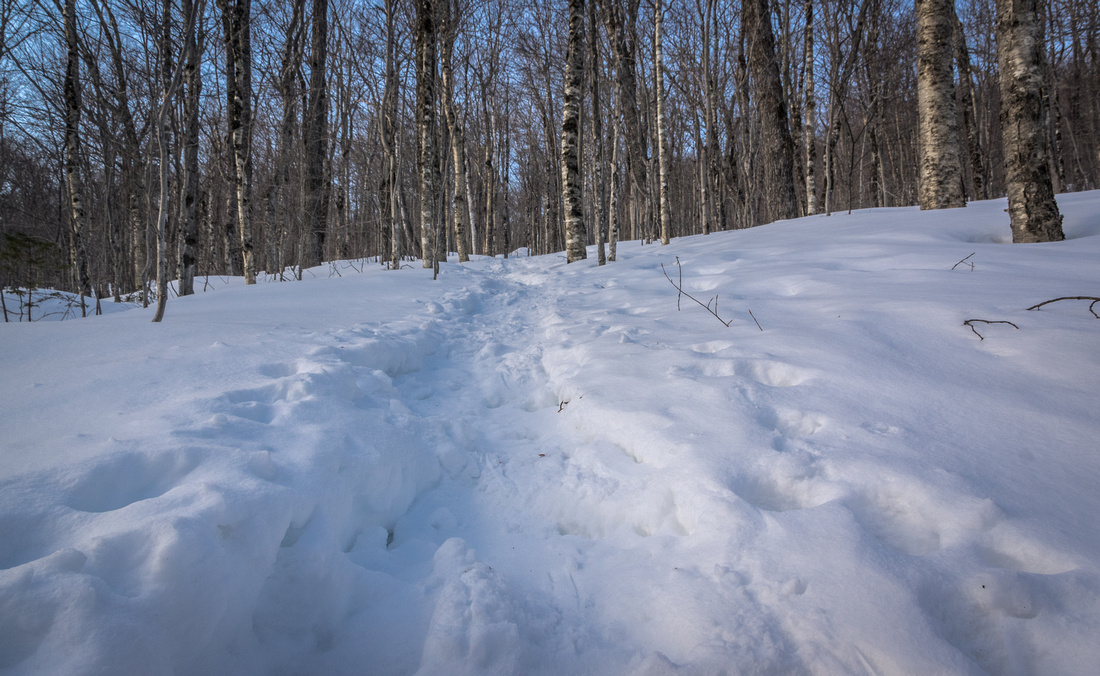 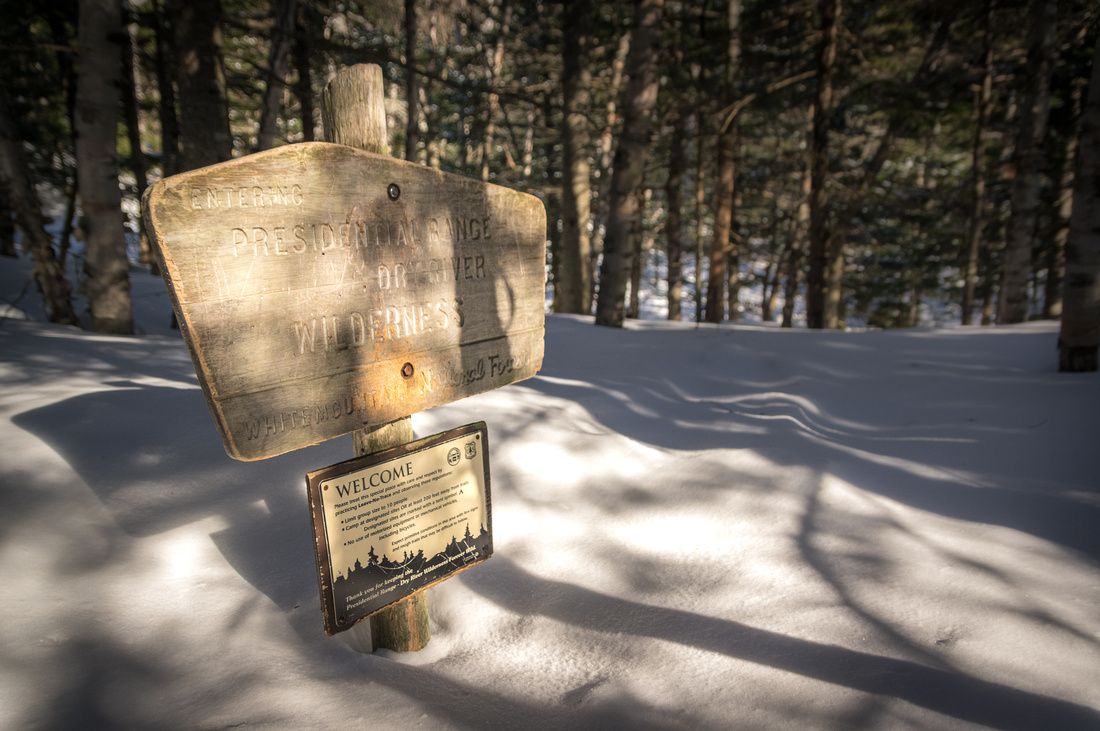 At approximately the 3-mile mark, you arrive at the start of the Engine Hill Bushwhack, marked by the "T" on the tree. 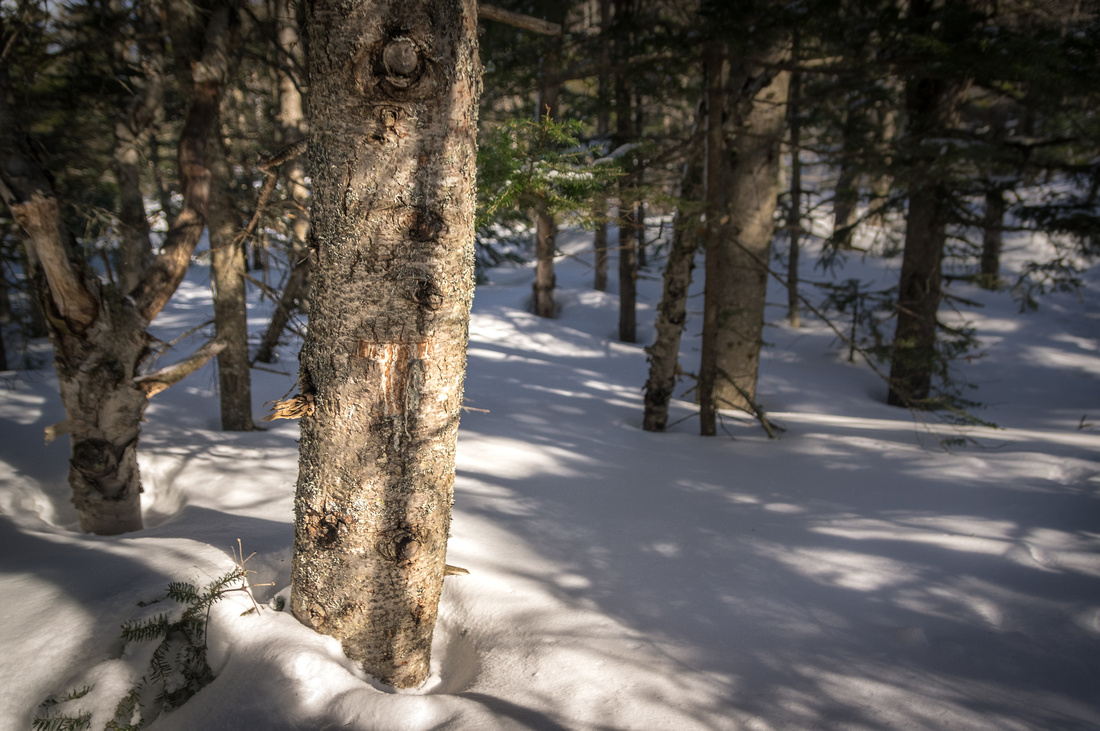 It is also easily recognized as the marked, Rocky Branch trail is no longer broken out, and the only evidence of previously hiked attempts head to the NW into what would be the bushwhack.   Now, because this is not a marked trail, and is just a general direction, we needed the trail to have already been broken out as none of us had ever done the route before.  Recent trail reports on New England Trail Conditions gave us the confidence we'd be able to follow the hikers from a few days prior. For the most part, it was fairly easy to follow, but we were at or around 3200ft at this point and the wind had really picked up quickly blowing in some of the older tracks.  As you can see in the picture below, when hiking along a winter bushwhack route, you'll commonly run into several off-shoot and trail attempts that sometimes dead-end as people attempt to pick their way through the forest. Also, due to that wind, and the fact that not everyone travels on the exact same route, the snow was much softer. The snowshoes would go on and stay on for the remainder of the day. 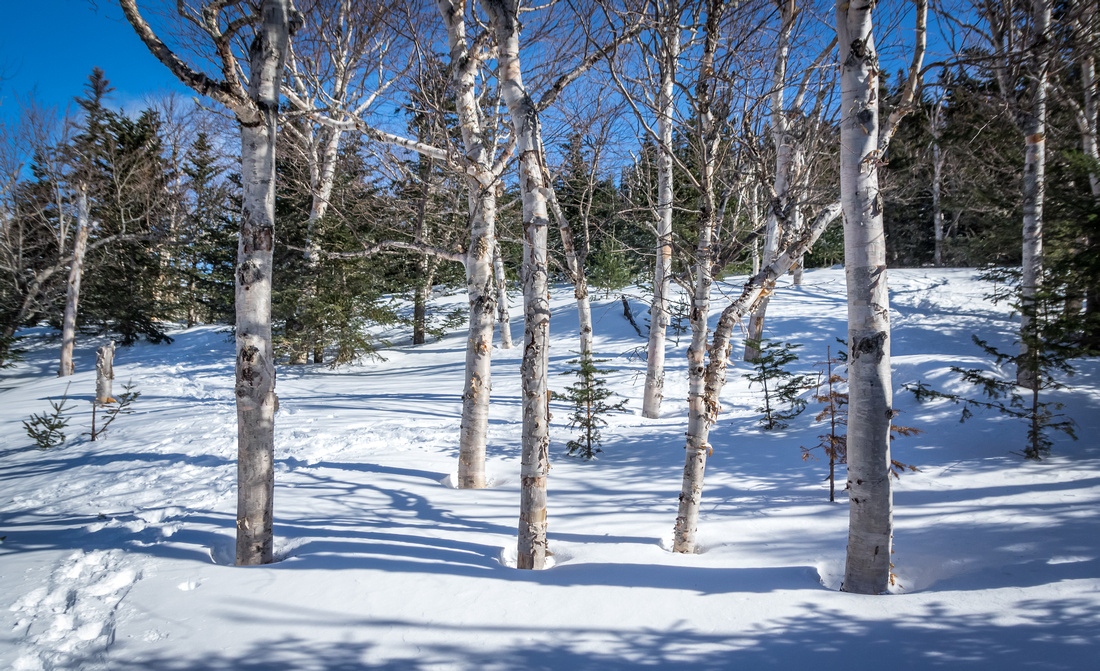 Luckily, there was a couple hiking a few hours ahead of us, and their very fresh tracks provided a perfectly executed route to meet back up with the Isolation trail. Once back on the Isolation trail, and now out of the wind, it was a fairly quick last few miles to the summit. Snow, and trees - everywhere you look.  It really was a beautiful day to be in the White Mountains.

The Isolation trail then meets up with The Davis Path. From that junction, it's only about one mile to the summit of Mt. Isolation. However, while we had experienced varying degrees of this on all our previous hikes this winter, that last mile would be almost entirely with your chest and head in the branches of the trees along the trail. This time of year, with the height of the snowpack, the base of the trail is anywhere from 3' to 5' above the actual ground. This results in your head and chest being that much higher than it would be without the snow.  For just about that entire mile, we had to push through, duck under, and climb over branches all the way to the summit. Eye protection is a must, and that doesn't prevent the constant pokes in the shoulder, thighs, ankles and head! However, like every hike I've been on throughout this incredible journey, the rewards far outweigh the suffering. In the picture below, you can see the opening in the trees in the lower right. That's the trail, as it finally climbs out of the tangle of branches, and above the trees to present you with the amazing view. 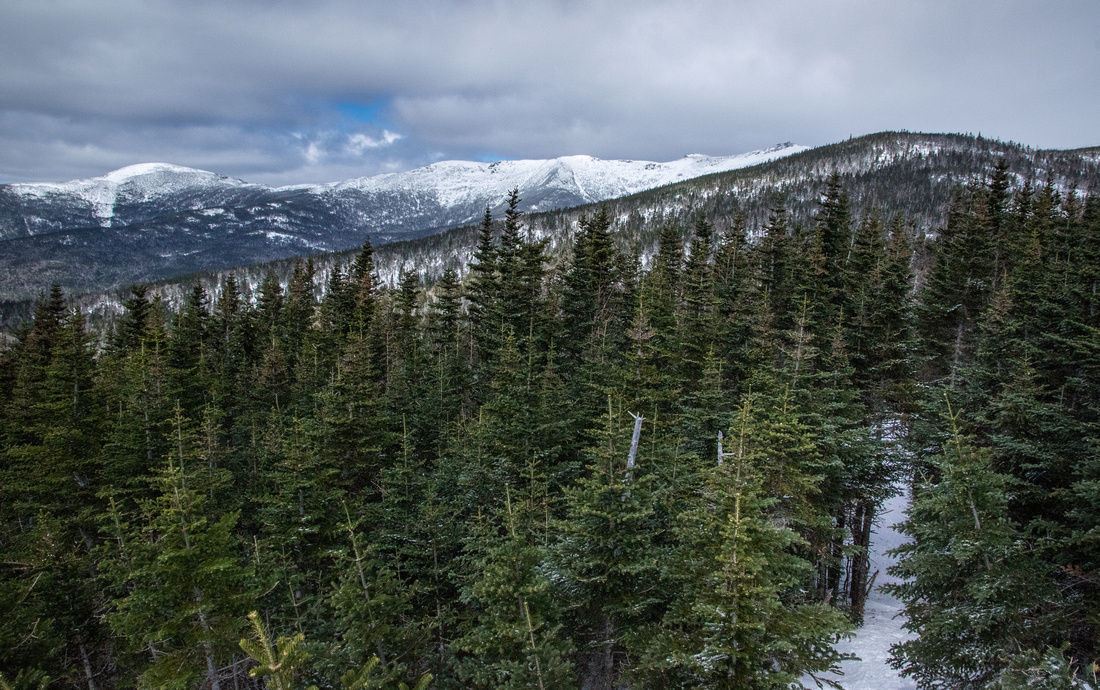 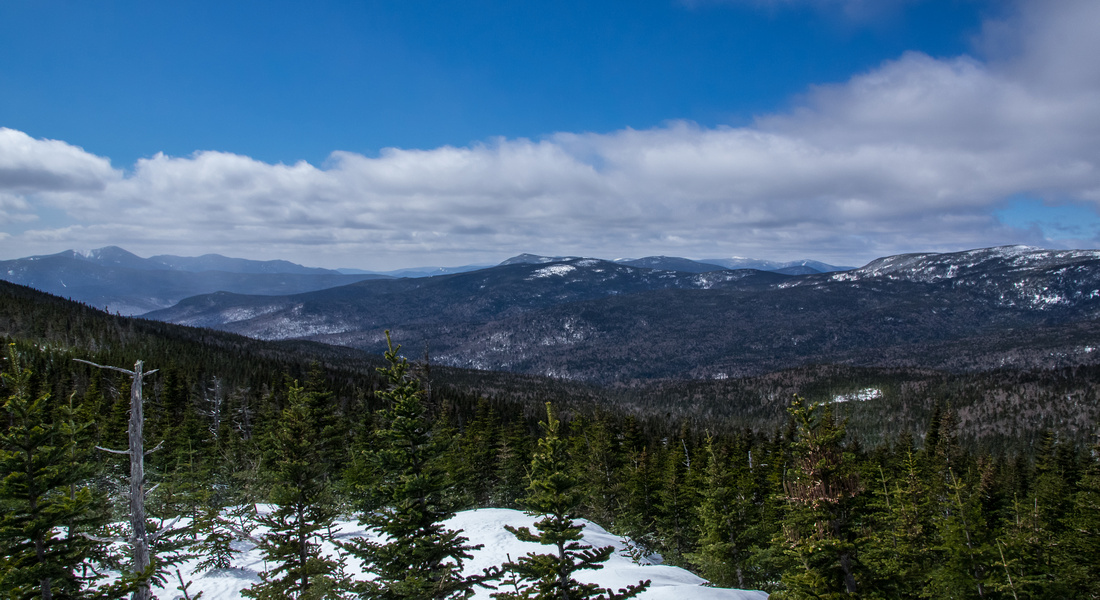 We were once again treated with beautiful skies and stunning views!  The only downside was, the wind had returned, and our time on the summit would be somewhat short-lived. We were blessed with 360 degree views, yet, the views back to the north were the best in my opinion.  The conditions were so clear, that the weather equipment and other buildings on Mount Washington were all easily seen from our vantage point.

A close up view of Mount Washington and Mount Monroe, a hike we all did together in early Oct.

This would be an out-and-back hike along the same route.  Once back at the vehicle, my GPS said we had hiked 12.8 miles in a little under 10 hours of hiking. I had successfully summited my 46th peak. My friends had completed their 14th, and 11th. With Isolation now in the books, that meant only one hike remained.  A final hike to reach both Mount Liberty and Mount Flume would be all that was needed to complete the New Hampshire 48.  I had just nine days left to reach my ultimate goal of completing all the peaks before my 50th birthday.  I was once again keeping a close eye on the mountain forecast, and those trail reports.  One last hike.