Not all owls are cute!

If you're attempting to reach the summit of all New Hampshire's 4000 footers, at some point, you'll need to hike Owl's Head. I've heard that many people wait to do it last. I've heard to just do it and get it over with.  I've heard "ugh, I'll never do that one again". I've heard, "there are no views, and you'll hate it, but you gotta get it done at some point."  Not exactly encouraging words for what is easily the longest hike for any peak on the list at slightly over 18 miles (without taking any bushwhack trails).

But, as stated above... at some point, I gotta do it.  There are optimal times, in my opinion, to tackle this peak. The classic route, which I would be taking, has 4-6 water crossings. Most are easy, yet at least two can be waist deep and downright dangerous depending on water level and recent rainfall. Also, while the vast majority of this hike is very to fairly flat, it's still 18+ miles.  For me, amount of daylight plays a role in the strategy. I figured August had the best mix of potentially lower water levels, and still long enough days to make it as good as time as any to get this one done.

On Saturday, August 25th, I arrived at the Lincoln Woods Visitor Center parking lot nice and early - around 6:40am.  LOT FULL. I would be parking down the street about 1/4 mile from the lot.  Great... added distance already and I haven't even left the truck!

After gearing up, and road-walking it to the trailhead, I eventually arrived at the 'gate' to the Lincoln Woods trail.  Many people know this bridge as the beginning of the death march.  The Lincoln Woods trail is as flat as they come, and as monotonous as they come for approximately 3 miles.  The bridge is the beginning of so many hikes (Flume, Owl's Head, Bonds, Pemi Loops) which is why so many people fill this lot, and so many people know this view. The next thing you see, shortly after crossing the bridge and turning right, is this. 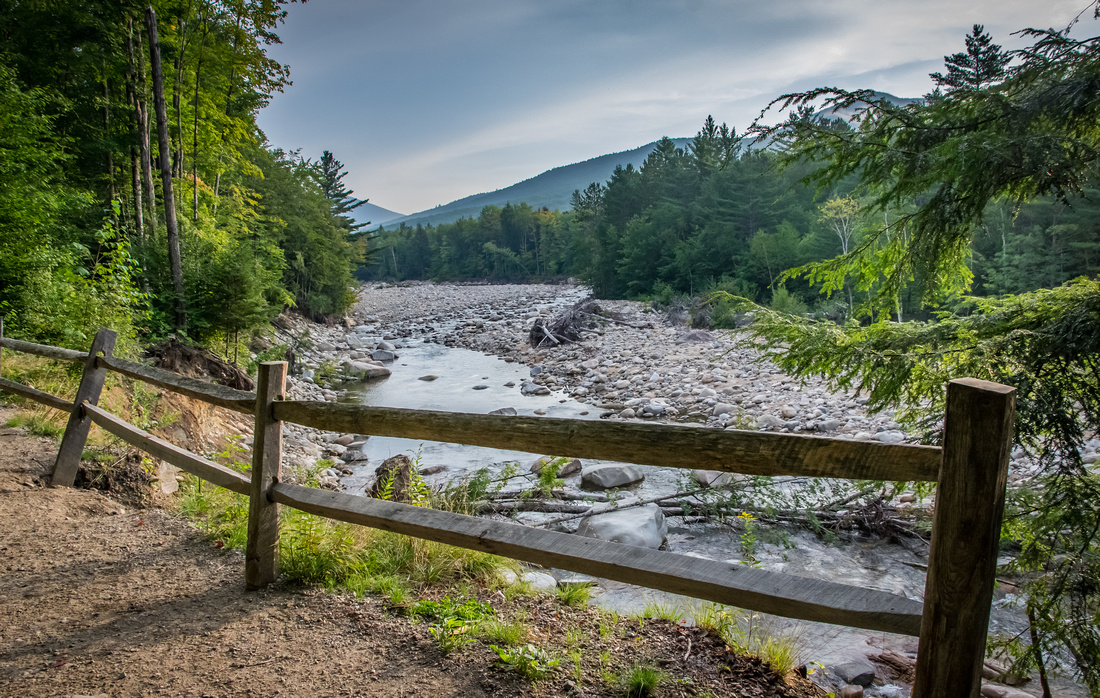 After a little over 3 miles of sameness... you arrive at another bridge. Which, depending on which way you're going, is either the end of the monotony or beginning. Although, the immediate trails beyond this point represent more of the same, only different. Soon enough, it would be time for the first major water crossing.  I had invested in a cheap pair of water shoes specifically for this hike.  It just seemed easier and not worth risking wet shoes (and therefore blisters) and especially on the way in.  Surprisingly, the water was quite refreshing to wade through. Never really any worse than knee-deep across this first crossing. The rest of the way, this trail stays close to the water, and I probably passed at least a dozen perfect White Mountains swimming holes, like this one. Deep, clear pools, perfect for relaxing and cooling off on a hot day. After one last rock-hopped stream, and a short hike, you'll arrive at the beginning of the Owl's Head Slide Trail.  It's not marked by much, but there is a new bear warning sign at the entrance to the trail now. Within yards of this cairn, the trail immediately begins to climb, and do so steeply!  The steep trail lasts about 3/4 of mile, and is extremely challenging over very loose scree rock even with the occasional mini stream running down the middle of it, just to make things that much more interesting. For a more detailed look at the footing on this trail, look no further than this picture.  This represents what 90% of your steps will be trying to grip to. I quickly realized why it's called the slide trail. Now, back to all those comments that Owl's Head has no views.  Sure... Owl's head summit has no views. However, as miserable as that slide trail is, if you just turn around, you'll see this... Not only is this a great view, but it's a very unique view of the east-facing side of the Franconia Ridge.  I was very pleasantly surprised at how great this view really was.

Finally, after about an hour of strenuous climbing and sliding (and swearing), the trail does eventually flatten out at the site of the old summit, leaving about a 1/4 mile to the real summit. And then, after over 9 miles of hiking, crossing streams and rivers, looking over your shoulder for bears, climbing straight up the slide trail, you are rewarded with this incredible summit! The hike back along the same route would prove fairly uneventful.  I'm not a huge fan of out and back hikes, I greatly prefer loop hikes, but that's not an option for Owl's Head (at least not that I'm aware of).  I do make sure to try to notice things I didn't see on the way in, or spend some more time along the stream in certain spots knowing I was doing good on time and daylight.  I make sure to change my socks, take care of my feet, and I did spend a little longer wading through that stream on the way back.

Right before arriving back at the second bridge (first one on the way back), I was able to snap a photo of this red squirrel.  There's something about this section of the wilderness they must like because I saw a million of these little guys on this hike. Once I arrived at the bridge, and began the 3+ mile hike back to the parking lot, I immediately met up with another hiker.  He was just coming down from the Bond Cliff trail and let me know he had been hiking since 2am, completing his third Pemi Loop hike (approximately 30 miles!!).  It sure did make my 18+ miles seem rather insignificant! However, talking with that other hiker saved me from walking that 3 mile stretch alone and focusing only on the pain my feet we were in!

Now, I won't be doing this hike again anytime soon, but I would love to do it again, and try the Black Pond trail route, or hike it with more water at the crossings, or have the confidence that I had the daylight left to relax and indulge in a few of those perfect natural swimming pools!

Thank you, Owl's Head.  I'll definitely be back!