I've had people ask numerous times "How did you get that picture!?" Sure, some images require a certain level of experience, or piece of equipment. However, the common denominator in my best photos, or any great image, is creating the opportunities, and being in the right place, at the right time.

On this morning, I would be attempting to photograph American Kestrels. If you're not familiar with the American Kestrel, they are the smallest member of the falcon family, and their numbers are in decline in this part of the country.  Several organizations, including a local one I continue to assist with, the Grafton Land Trust, are doing their part to help bring these amazing birds back to our area.

I arrived at my location at 5:40am. Within minutes of leaving my truck, I had my first of many surprises on this morning. A lone doe walking through the tall grass.  The interesting part for me about this image is not the image itself. The light wasn't great, the sharpness isn't perfect, and the setting is fairly standard. What amazed me most is what you can't see.  When I saw this deer, my camera was off, my tripod was slung over my shoulder, and I was standing in the middle of a trail.  This doe hardly moved, while I turned on the camera, removed the lens cap, adjusted the settings, extended the tripod legs and moved around for a better shot angle. Only after I managed a few photos did she calmly just walk off into the grass and woods. 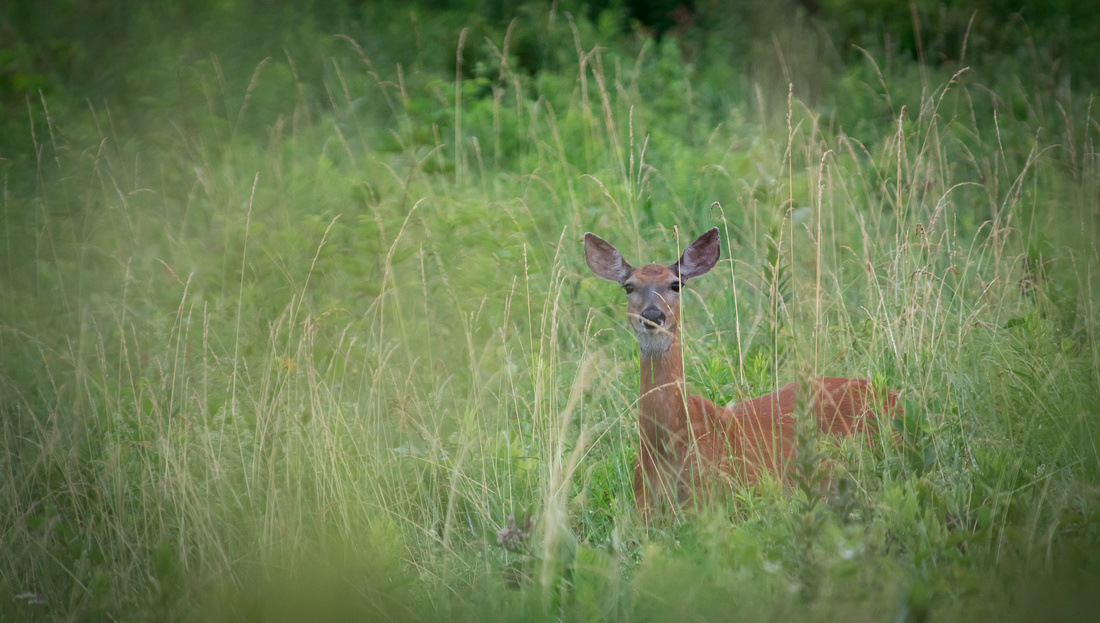 After getting set up, and waiting for the kestrels to return to their favorite perch, I can hear a rustling in the bushes getting louder and louder.  I'm sitting down, with grass and bushes higher than my head. My visibility, other than towards the kestrels, is no more than a few yards!  I finally located the source of the noise, and see a great looking bird with a bright yellow eye.  And, just like the deer, instead of flying off, this bird watches me completely contort and reposition myself and camera to get a few pictures. I looked this bird up when I got home, and learned all about Brown Thrashers. 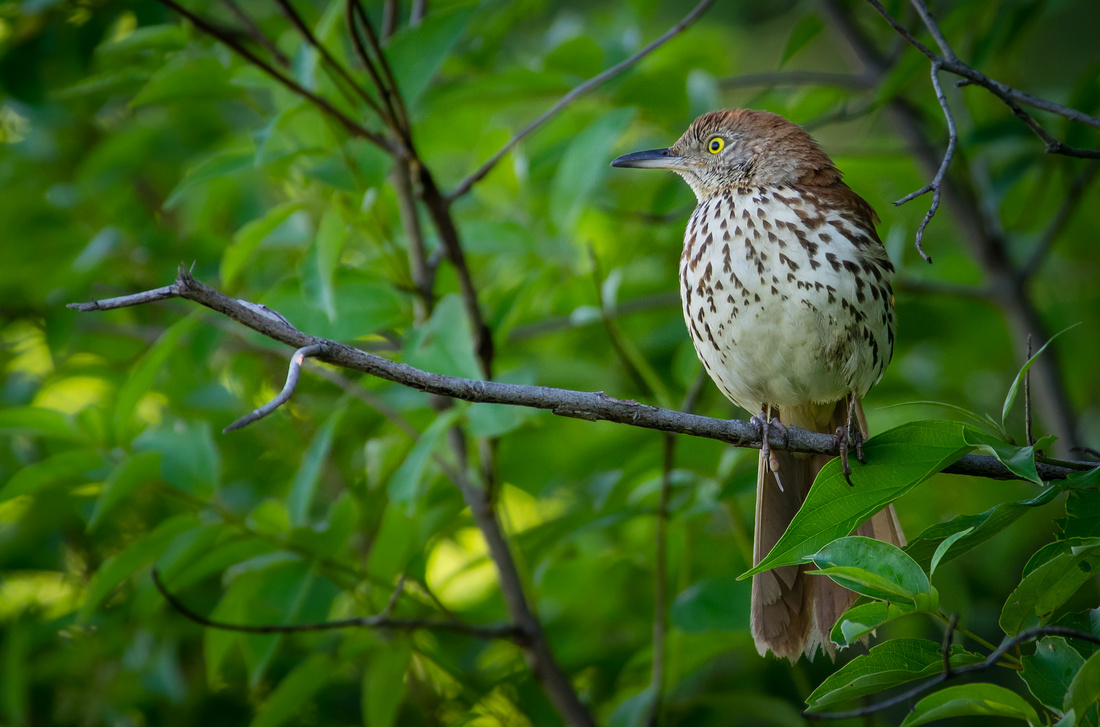 Back to today's original mission - the kestrels. They too, did not disappoint. For the several hours I spent taking pictures, and observing them on this day, they displayed just about every known behavior and trait that makes them so unique.

While one of the chicks has already fledged, the other chicks remain in the nest box, and will be leaving soon to join their parents, and sibling, in the 'family dead tree perch'. Until then, they're content to take turns peaking out of the box.

If there's one thing I've learned about kestrels, it's that they're amazing little hunters.  Their diet is vast, but in my experiences, if you're a small mouse or vole, and happen to live within a few miles of a hungry kestrel, you are in big trouble!  On this morning, I watched the adults bring back 2-3 mice per hour.

In this first photo, the dad (bottom) has returned with a fresh kill. The mom (top) is sitting this one out, while the new chick (left) is very excited about breakfast arriving. 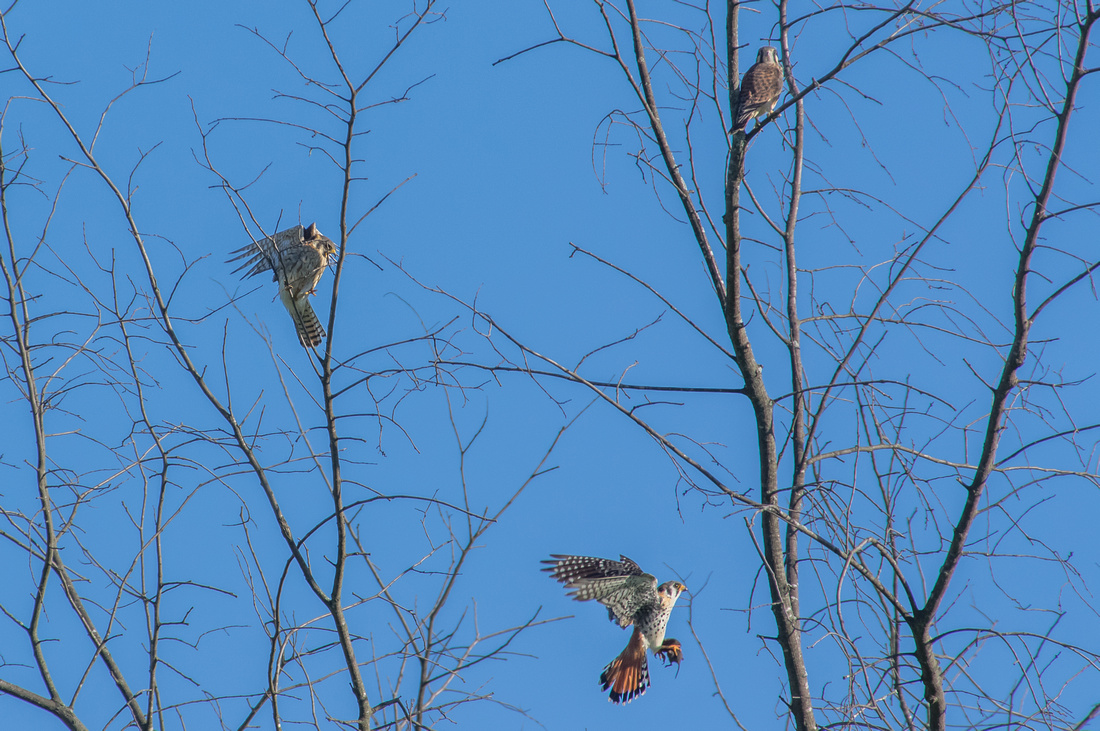 In this next image, it's the mother's turn to do the mouse hand-off to the newly fledged chick. 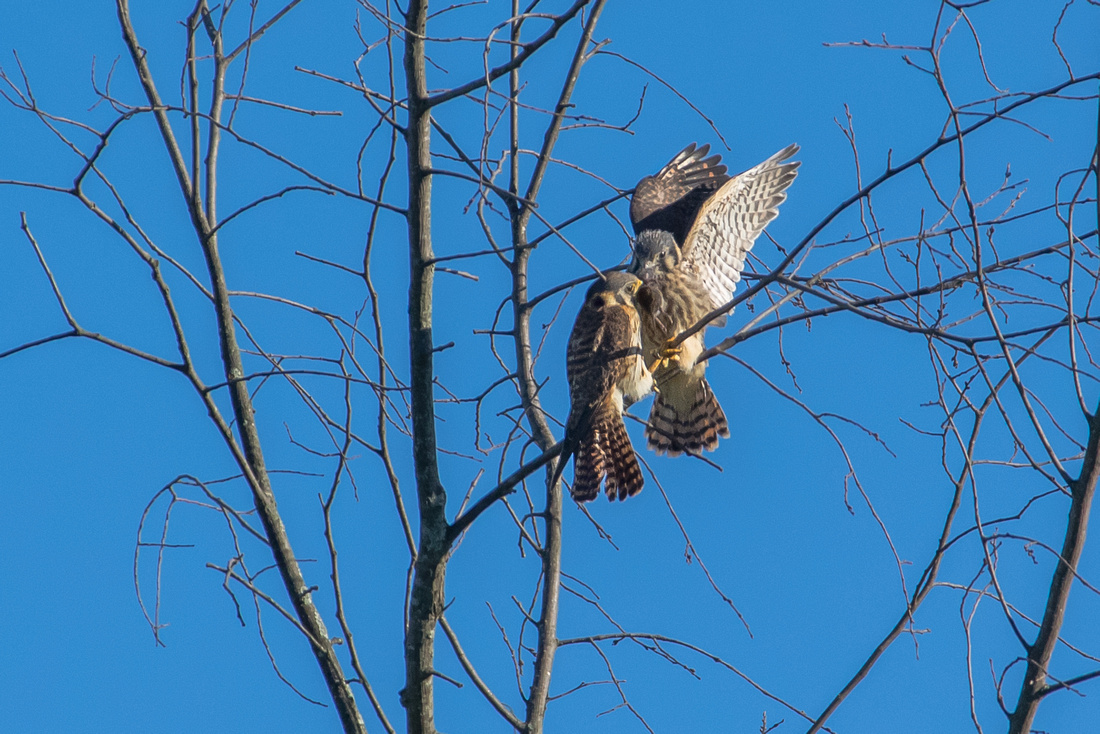 This last kestrel image shows the happy family all together. Dad, supervising on the right, mom in the middle with yet another fresh mouse, and the chick on the left. 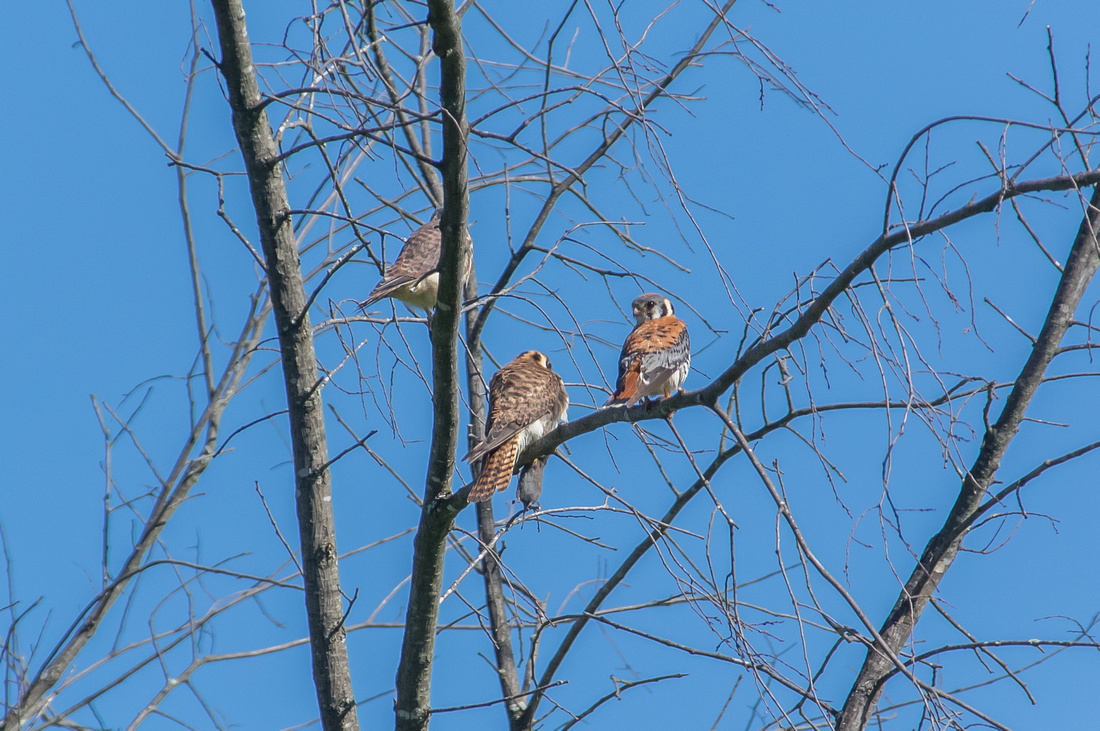 After having secured a fair amount of kestrel images, and my own hunger now getting the best of me, I packed up, and started my walk back. Along the trail, I noticed several dragonflies on the ground, so I decided to try to get a picture. Once again, as with the deer, as I repositioned myself, the camera and tripod, and literally laid on the ground within feet of the dragonfly, it never flew off, not once. I've photographed these types of dragonflies before (Halloween pennants) and I swear, they look like they're smiling! 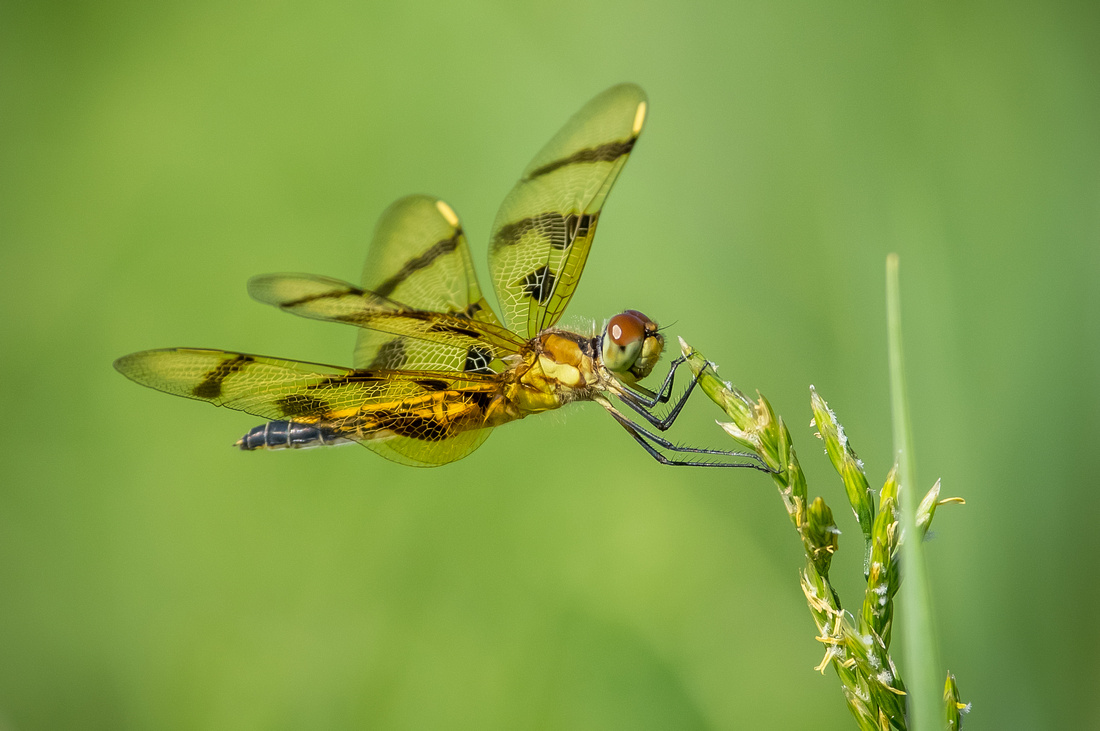 Having arrived back at my truck, and unpacking my gear, I could hear the kestrels making lots of noise overhead behind me.  I figured it was their way of making sure I was leaving.  When their calls persisted, I turned around and noticed what they were doing. Each adult kestrel was hovering and then quickly swooping into the branches of a huge pine tree to try to scare off an immature red-tailed hawk.  The young hawk screeched back a few times, but otherwise, wasn't bothered at all by its small, annoyingly loud neighbors.  For the last time on this morning, an animal I had no plans of seeing, allowed me to get all my gear back out of the truck, set everything up and take lots of pictures. I walked around this tree and got as close as I wanted to, and I think the young hawk maybe looked down at me a total of three times. 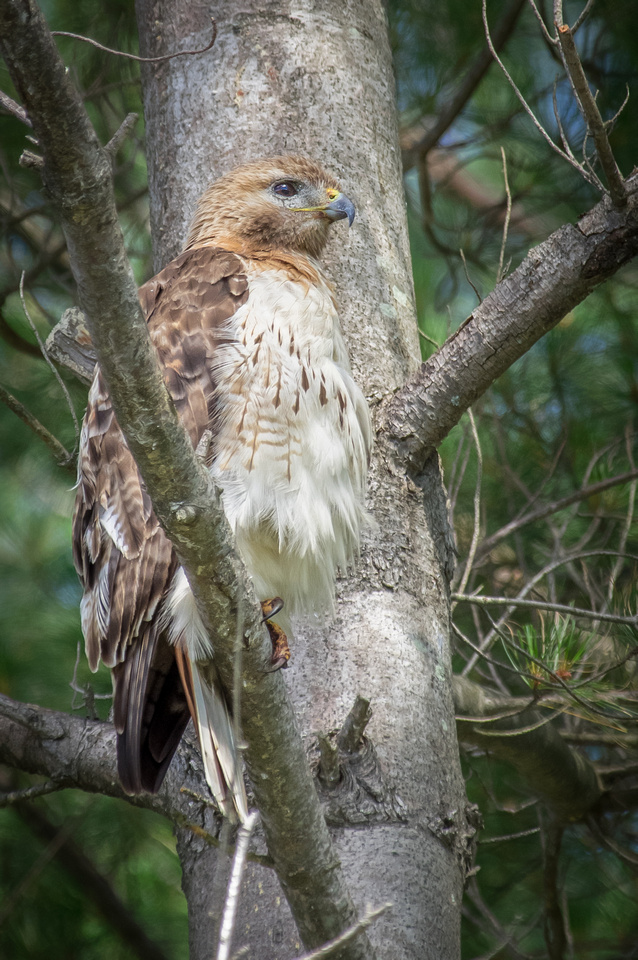 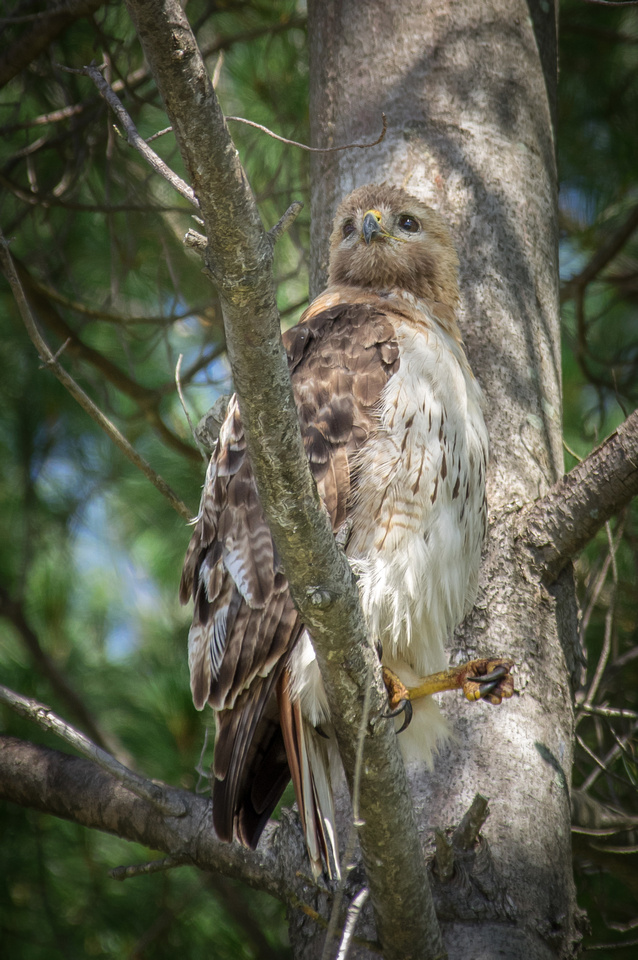 Opportunity, and time.  I created my own possibility for photographic opportunities by simply getting out of bed early.  The incredible amount of time each of these animals allowed today, was unprecedented for me, and made this a morning to remember.