It's all downhill from here! (plus a LOT more uphill)

It's official.  I have successfully summited 24 of the 48 peaks on the list of New Hampshire's 4000 footers. On Saturday, March 24th, after reaching the summit of Mt. Waumbek, I had exactly as many peaks remaining, as I had now previously stood on.

This is an unusual time of year in the White Mountains. If you were to look anywhere around you, there's still plenty of snow.  It seemed as though every other vehicle on the ride up in the morning was either a truck with a snow mobile trailer, or a vehicle with skies on the roof.  There were even light flurries as I approached the trailhead.  Yet. as of around noon time on Tuesday March 20th, it is actually no longer winter. Gone are hikers trying to complete or add to their official Winter 48 lists. Combine that, with Waumbek not being one of the most popular hikes on the list, and as I arrived at the winter parking lot across from the trailhead, I was only the third vehicle in at 7:30am.  This time of year is void of the deep greens and rushing streams of spring, the variety of colorful flowers, mushrooms and lushness of summer, and the vibrant colors of autumn. Knowing this, and that the views on this hike would be somewhat limited, I made the decision early on to focus on photographing and sharing this experience entirely in black and white.

As you leave the winter lot, and walk the short distance down Rt 2 to Starr King Road, this is the view of the snow-covered, presidential range looming in the background. 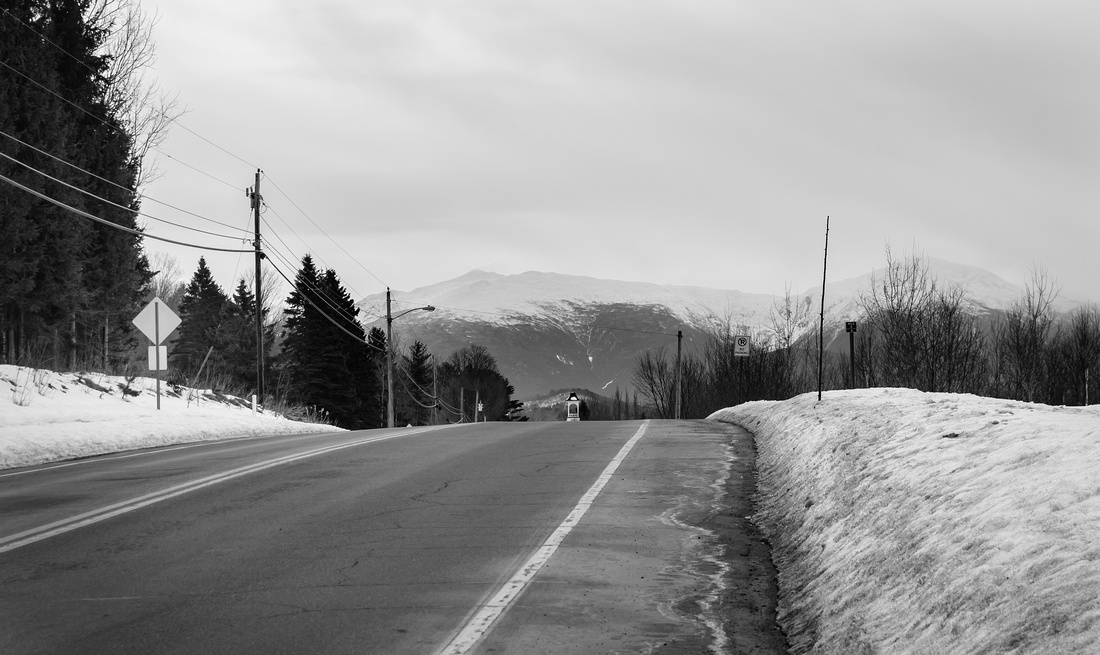 Thankfully, the trail had been previously broken out, and it was mostly well-packed down the entire journey.  I did wear the snowshoes the entire time, partly to assist with continuing to improve the trail, and partly to not carry them! While the sun was in a battle with the clouds all day, the early morning sun angle made for some great long shadows and light coming through the forest. 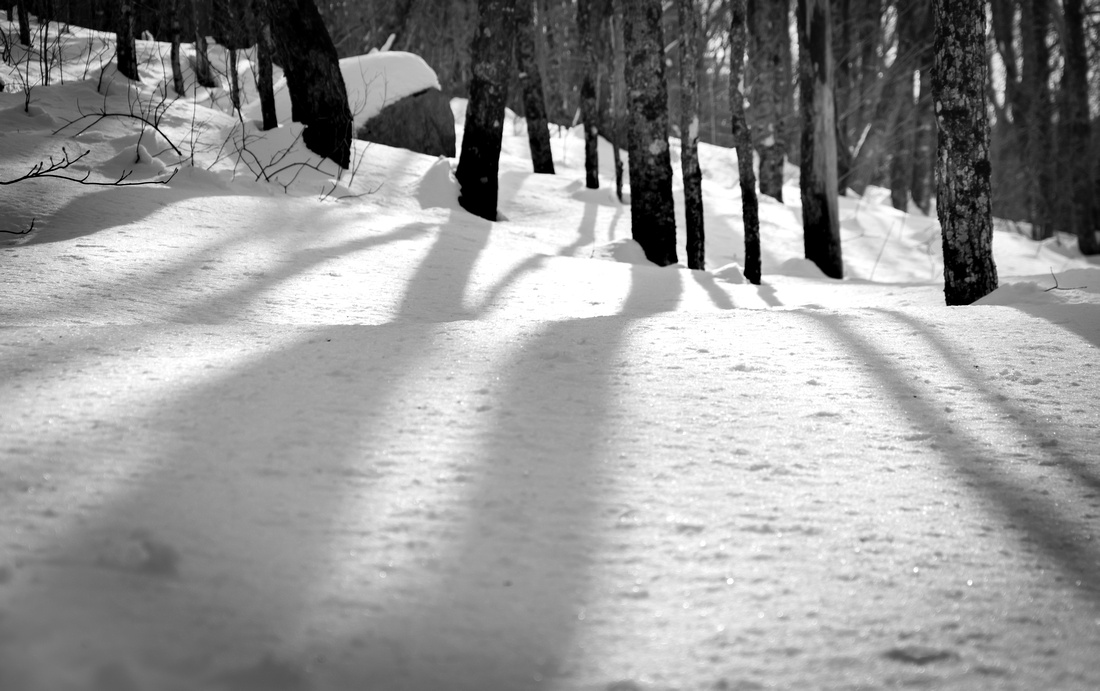 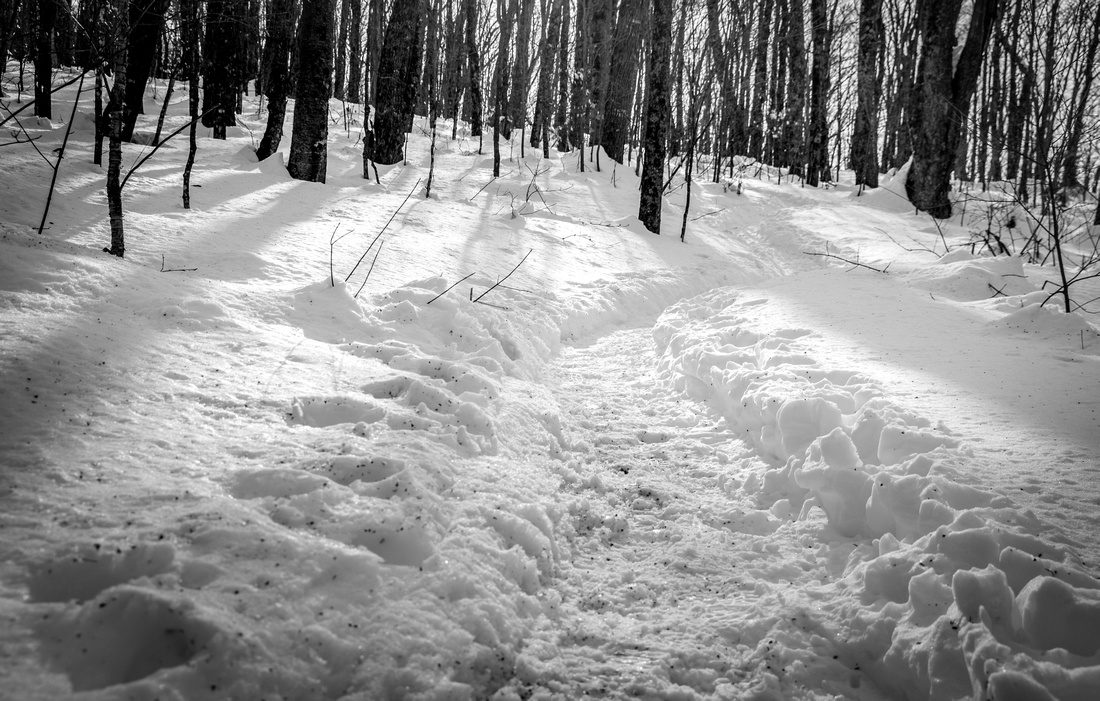 At one point along the trail, before reaching the summit of Mt. Starr King, I finally found where all the warmer weather must be! 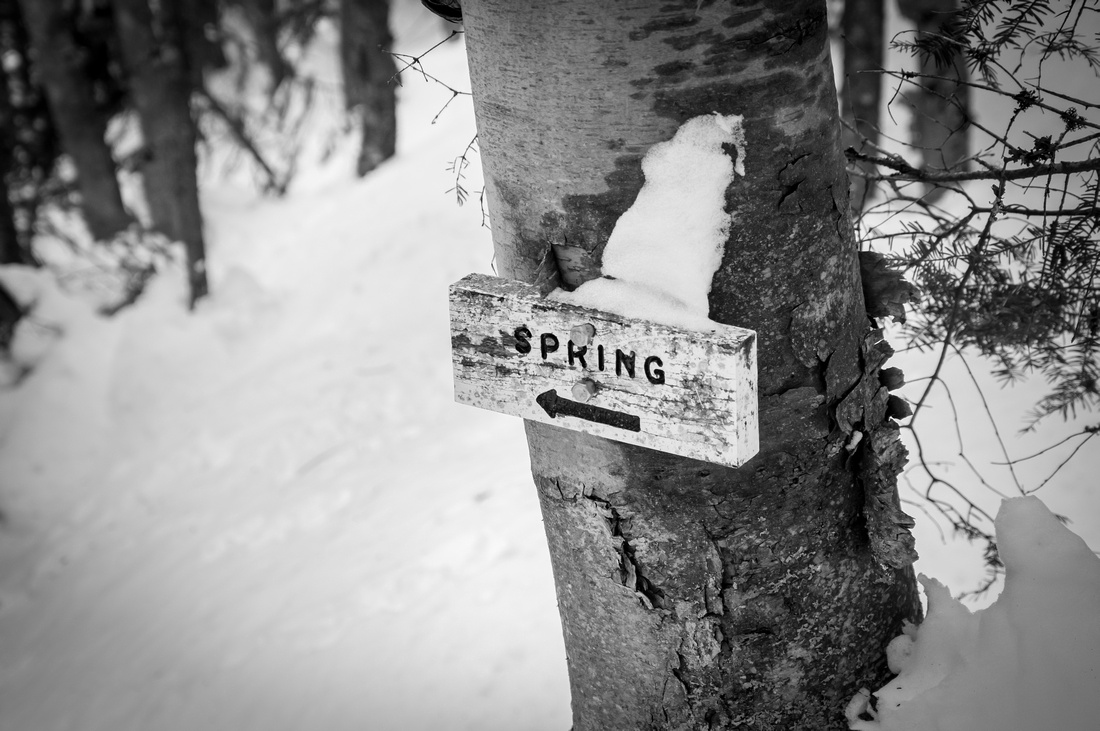 Even though this area hasn't had a significant snowfall in days, the snow depths and amount of snow still clinging to the trees would make you think otherwise. This photo was taken shortly before reaching the summit of Mt. Starr King. (Mt. Starr King is not on the official NH 4000 footer list but offers stunning views of the presidential range and immediate area) 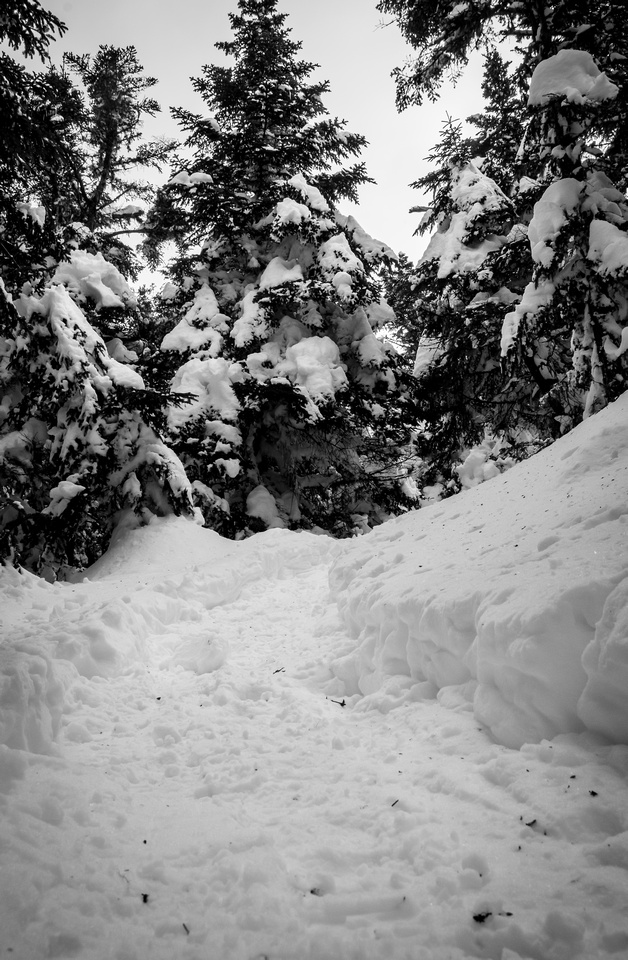 I was fortunate enough to be at the viewpoint from Mt. Starr King early enough before the clouds really rolled in. The snow-covered, presidential range and the low clouds hanging over each of them, feel incredibly close. After only a few minutes of being there, as seems to always happen in The Whites, the clouds covering Mt. Washington parted enough to be able to see the peak, and various weather apparatus. (far middle/right of photo) 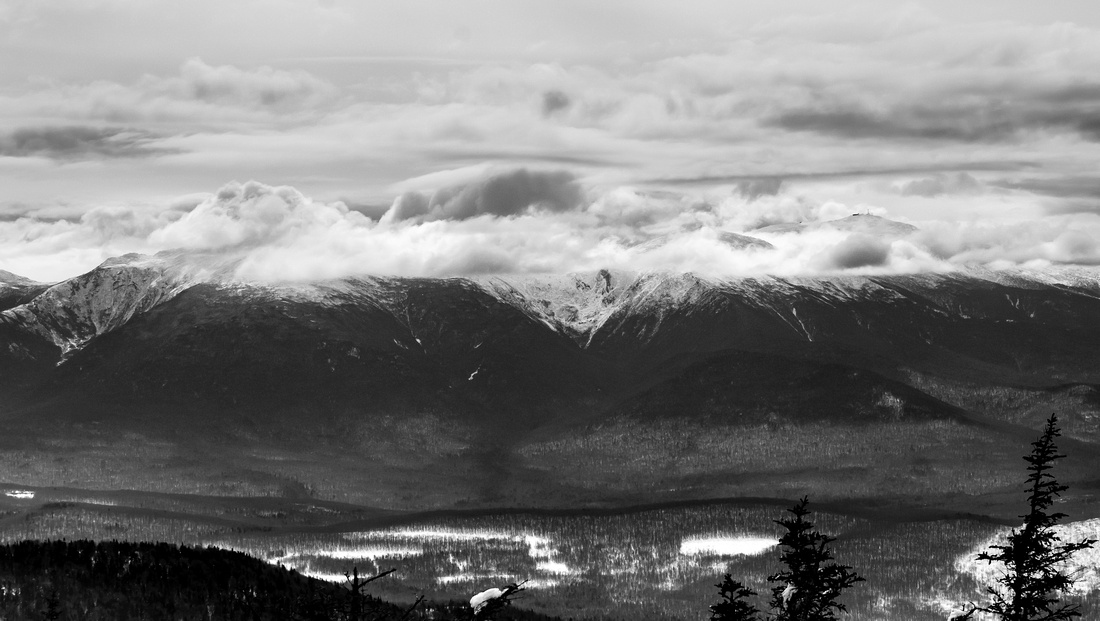 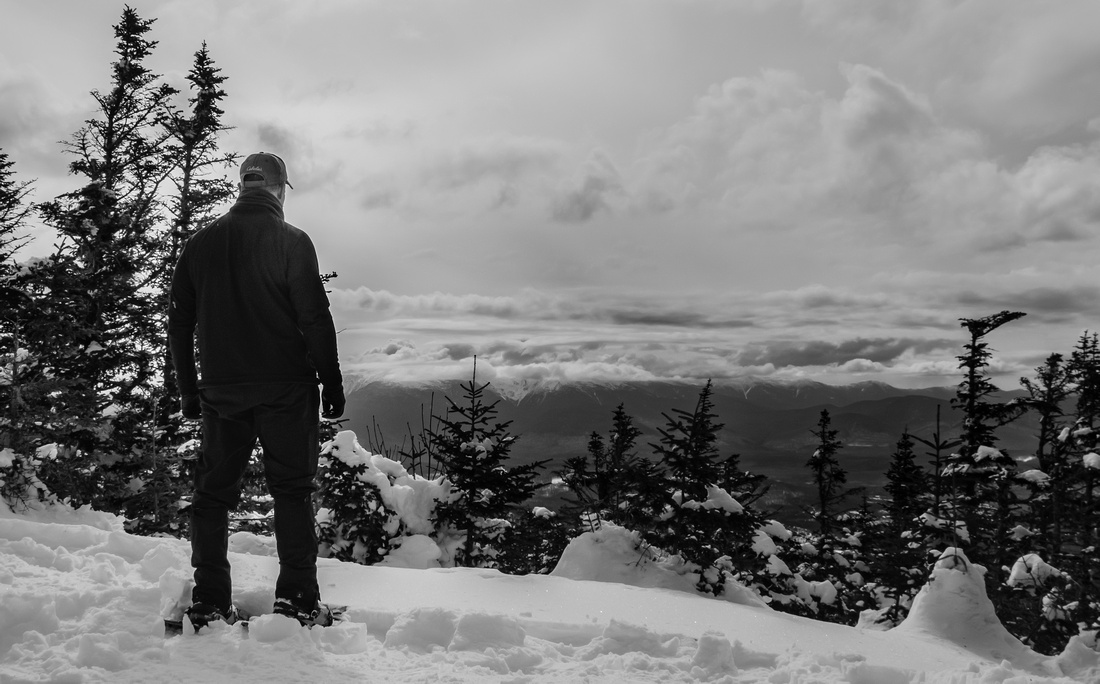 Just to the left of where I'm standing in the photo above, there's the remnants of an old fireplace from a shelter that used to be on this piece of property. 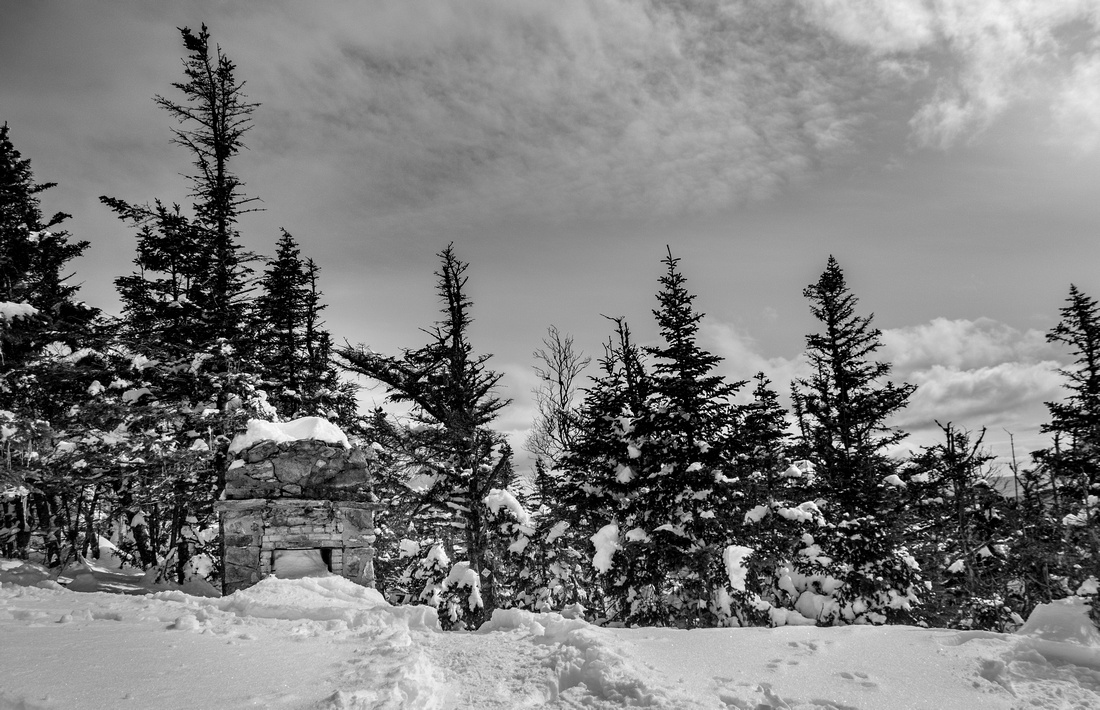 And, just to the right of the fireplace, in case you weren't sure which way to proceed.... 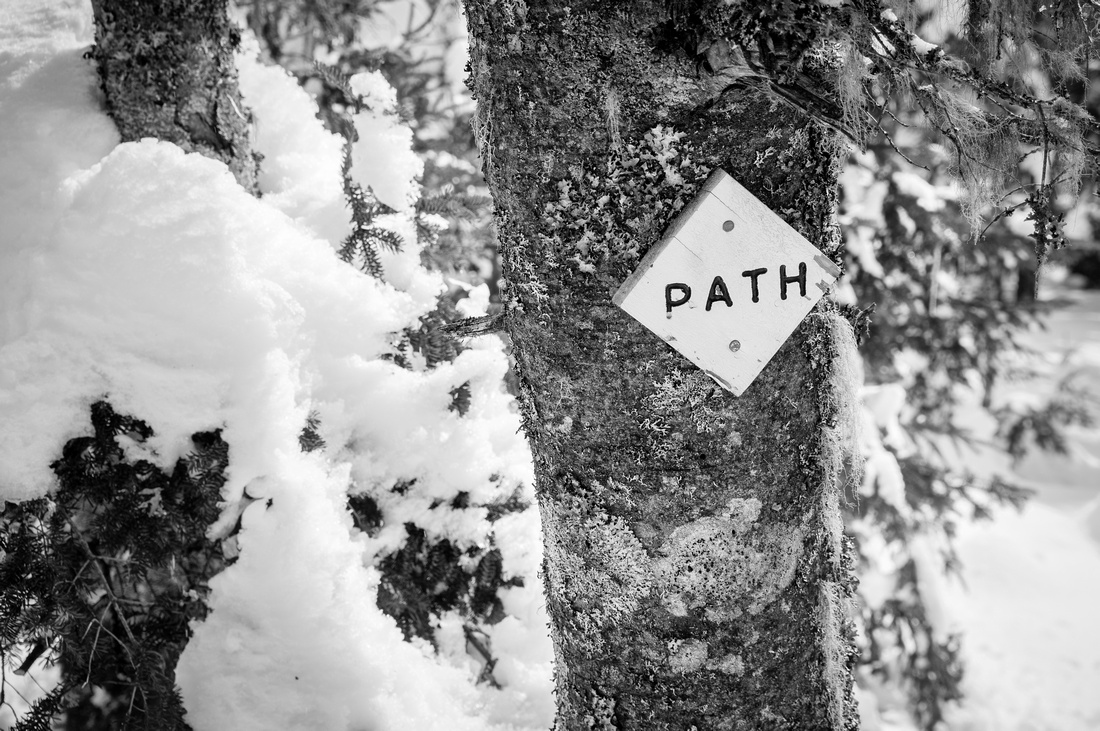 When I reached the actual summit of Mt. Waumbek, as well as the lookout point just a short way down the trail past the summit, the clouds had really taken over any views that might have been there. On my hike back, I noticed the interesting texture on one of the many yellow painted trail blaze marks. Throughout the return journey back to the truck, I made it a point to try to capture some images of other interesting blaze marks, unique tree barks, and an example of the moss that wraps itself around so many of the trees in this area. 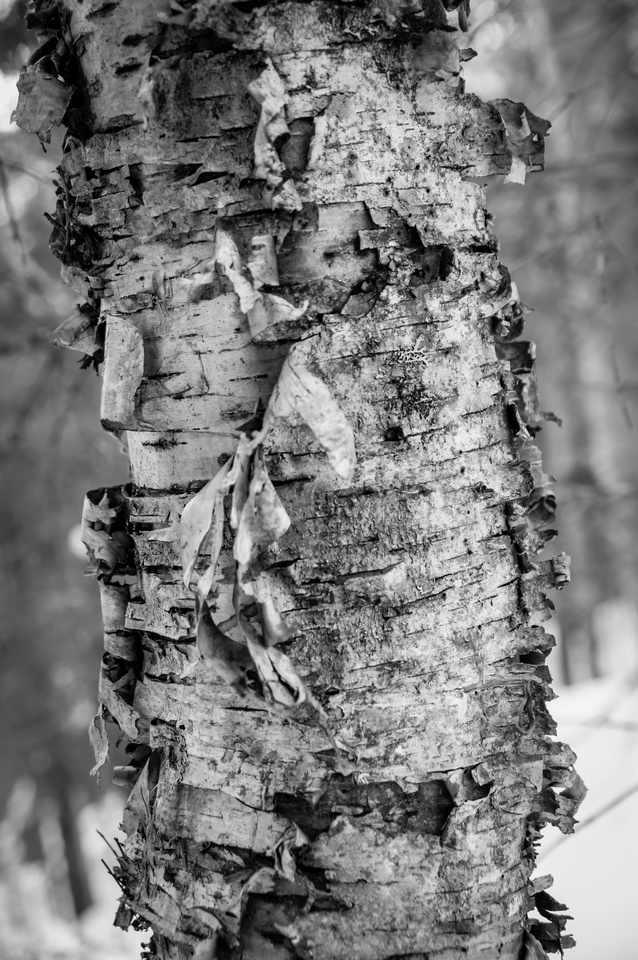 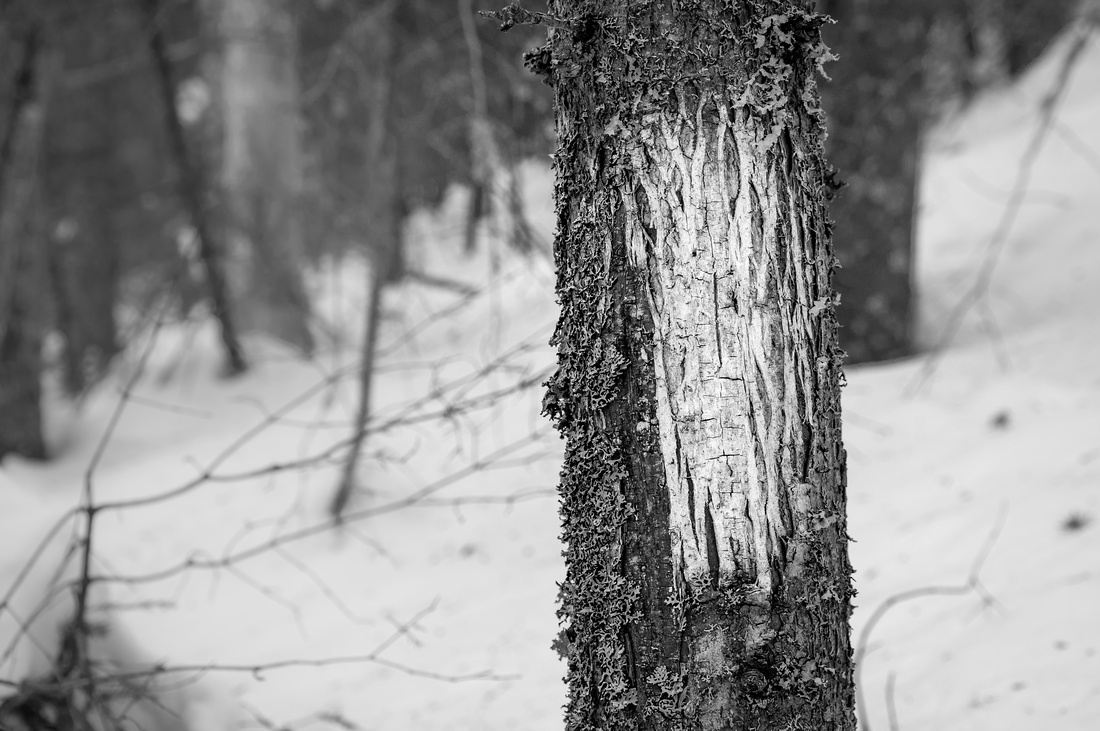 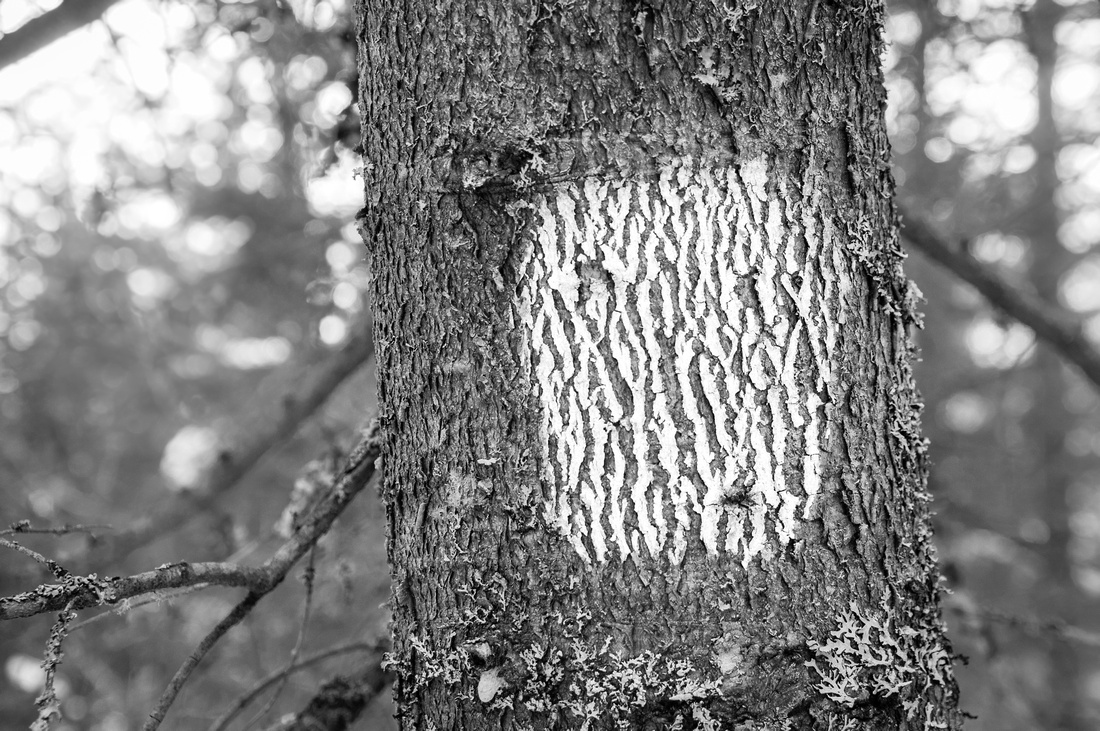 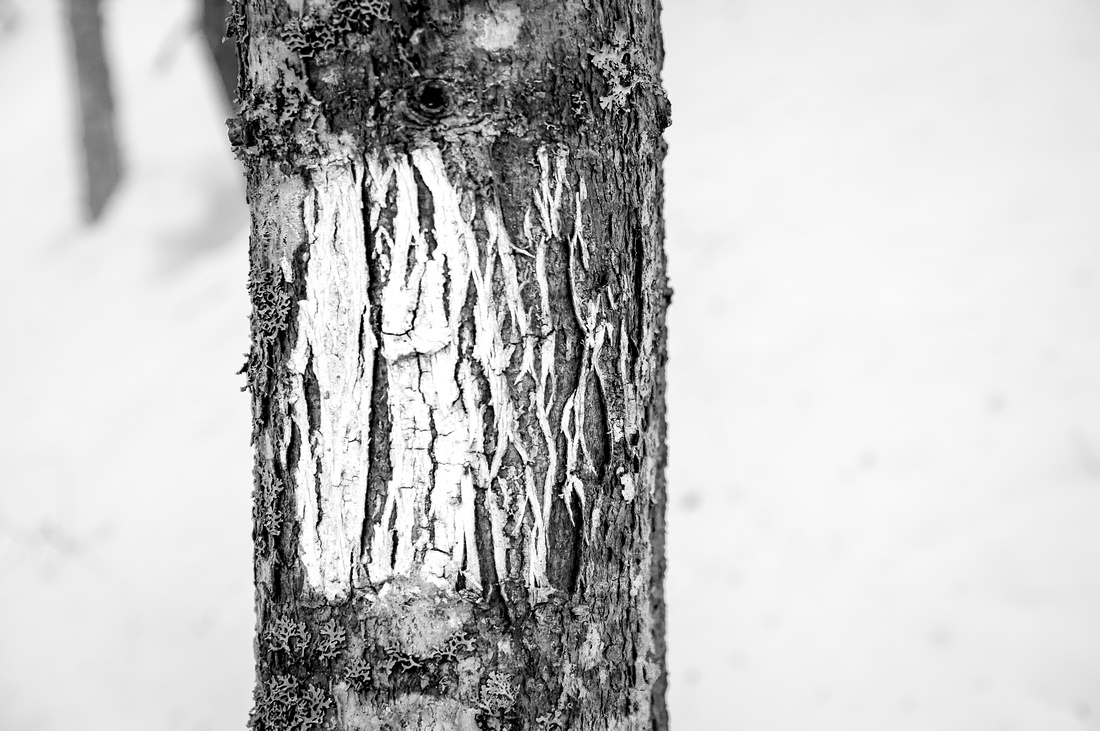 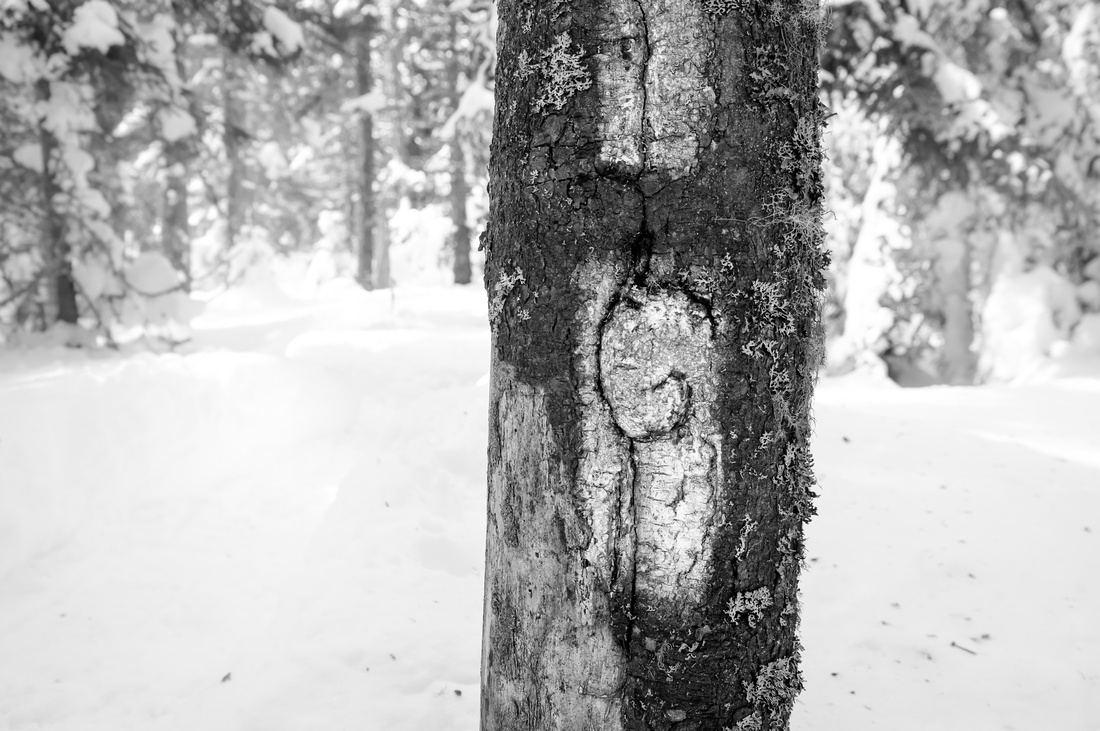 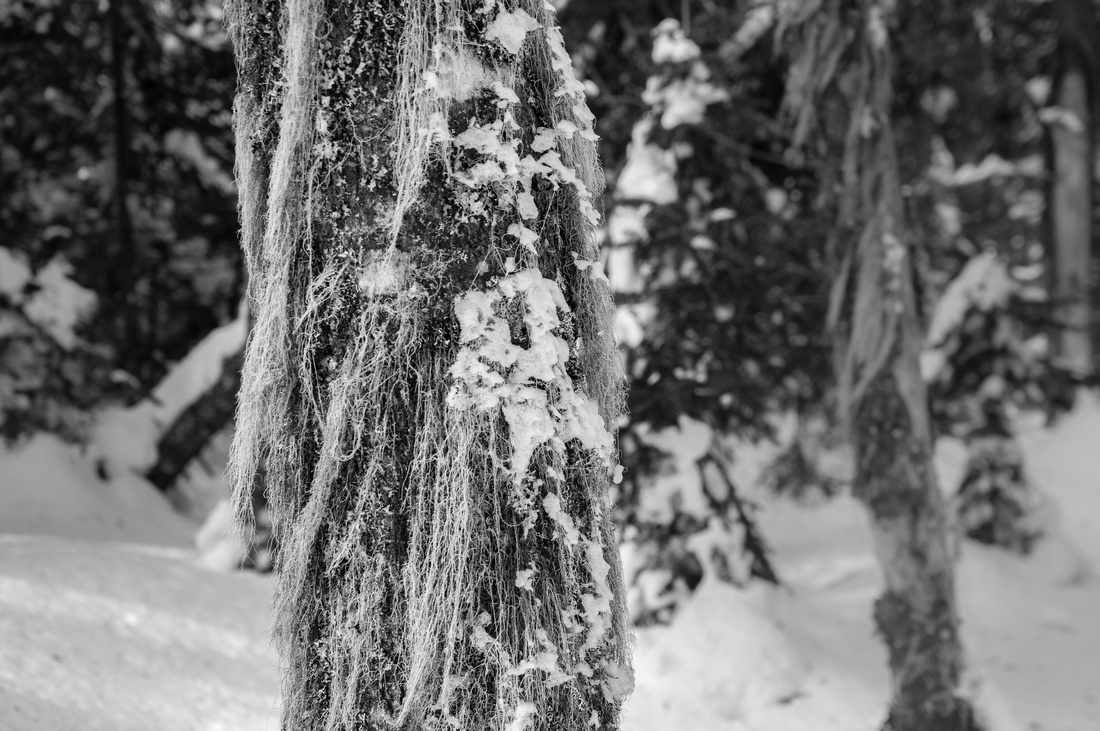 I know Mt. Waumbek doesn't get the praise and notoriety of many of the other well-known hikes on the list. However, if you take a moment to simply enjoy the beauty on the ride to the trailhead, take in the views from its neighbor, Mt. Starr King, and make an effort to focus on the details during the entire hike, I think you'll enjoy this one as much as I did.