A classic February hike... in April

On Saturday, April 21st, I attempted to summit my 25th New Hampshire 4000 footer.  I say 'attempted' because I didn't officially reach the summit. I decided to take a less-traveled, unmarked route via the Fire Warden's Trail because it was supposed to be more scenic.  I have nothing to compare it to, but with all the fresh snow from the last two nights, it was absolutely scenic!

On the lower part of the hike, the snow was only about 3-5" deep of all fresh powder. 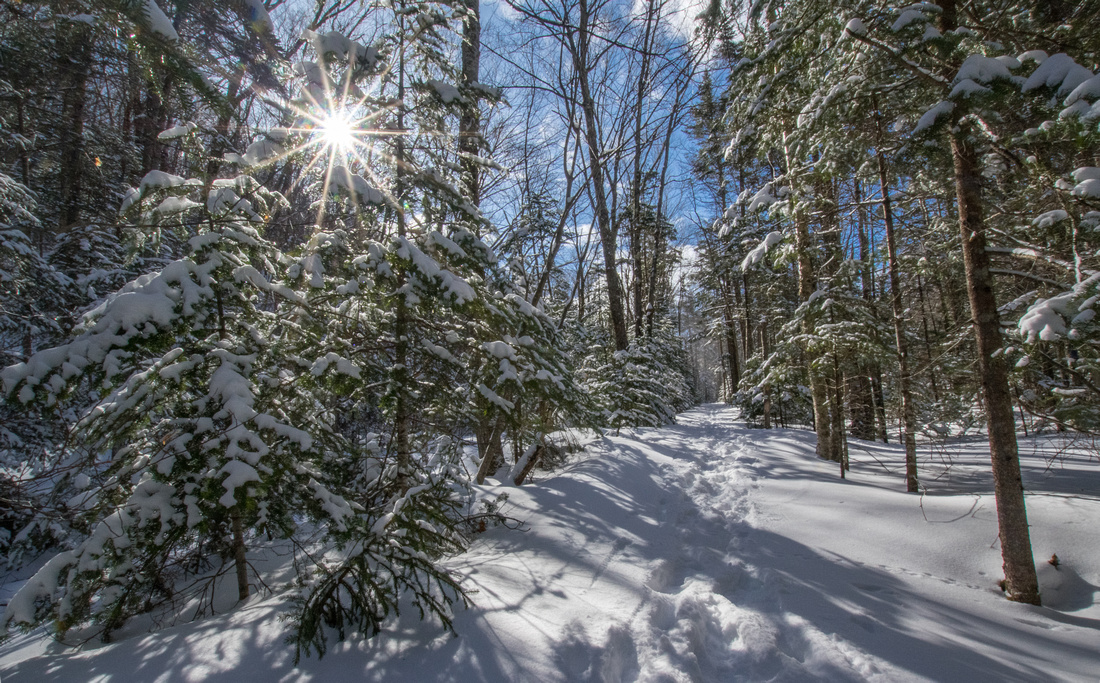 There's a few large ledges along the route, this one was covered in ice. 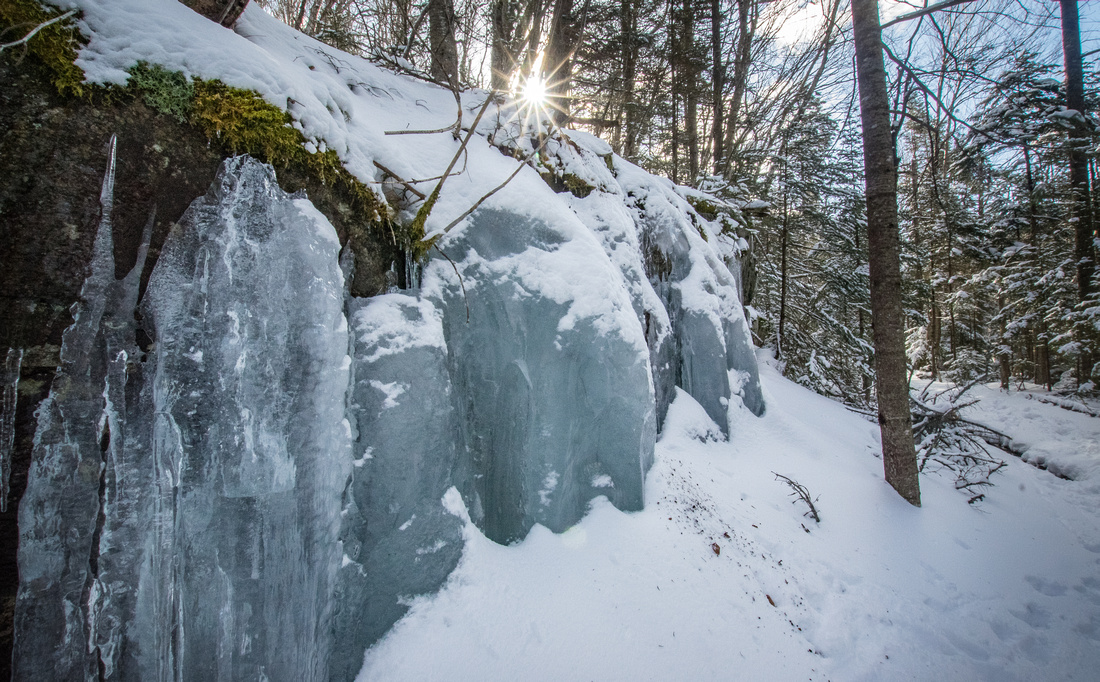 One of the most talked about aspects of this route is a section referred to as the 'birch glades'. I didn't see any skiers today, but I can understand why it would be so amazing to hike up and ski down through here!! 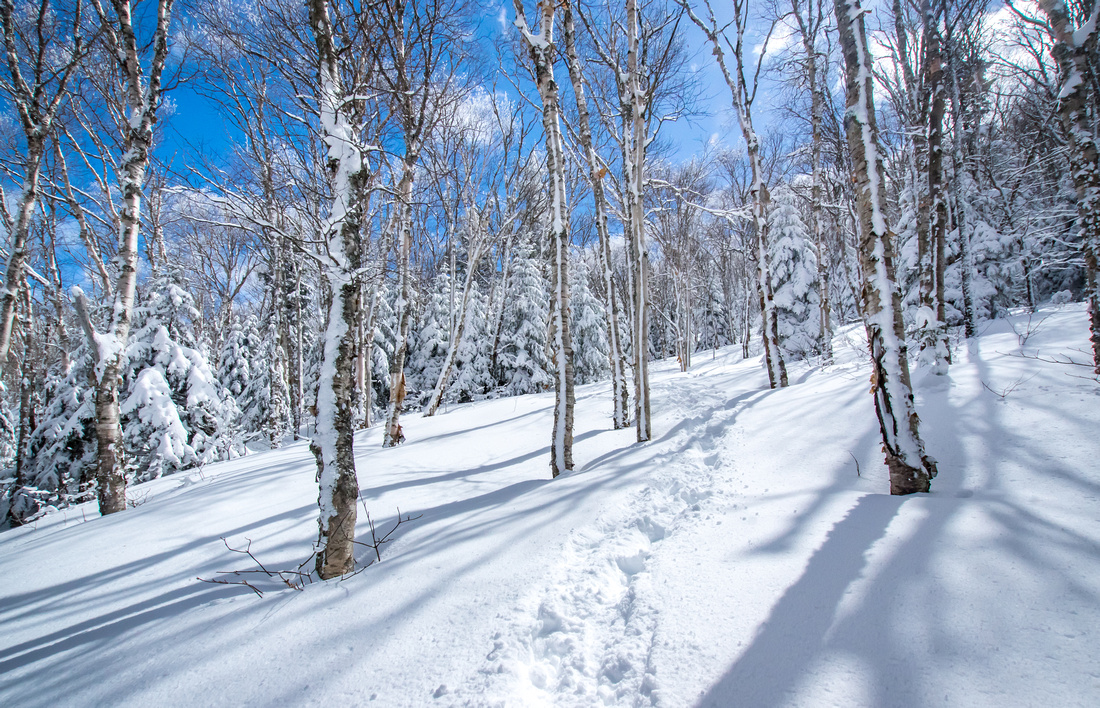 As you can see, the snow was getting very deep, making the snowshoes a necessity for me now. There was only one other person on this route/trail today ahead of me and he didn't have snowshoes.  I followed his tracks exactly how he told me (we crossed paths on his way down), but I still wasn't able to locate the true summit.

As I got closer to the peak, the snow depths were well over a foot, and covering every tree, branch and twig. 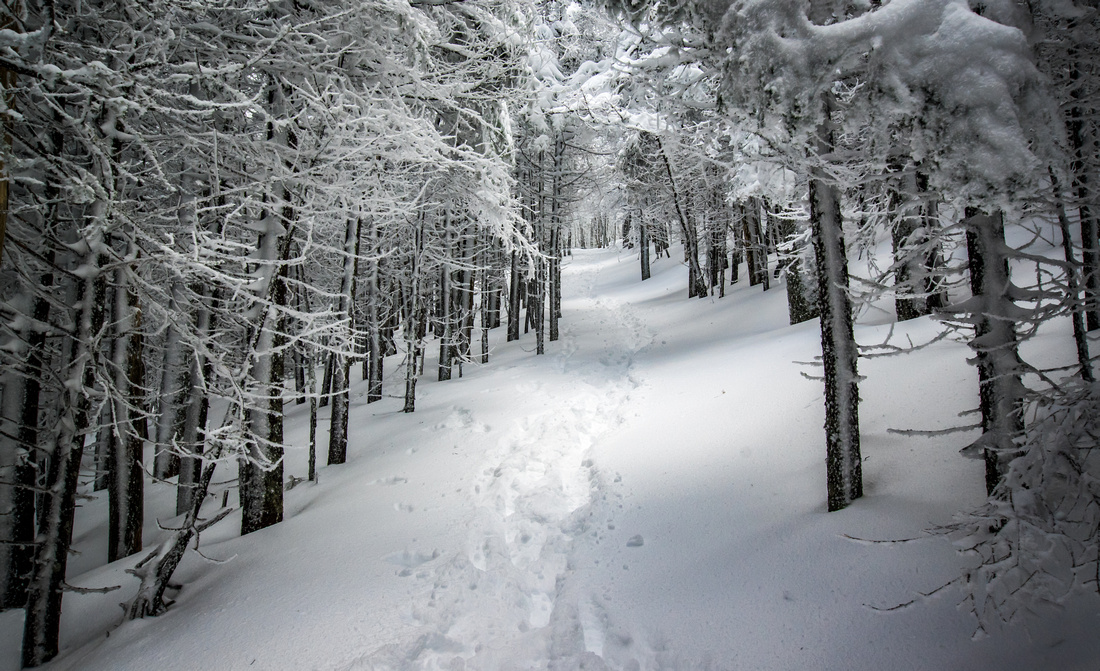 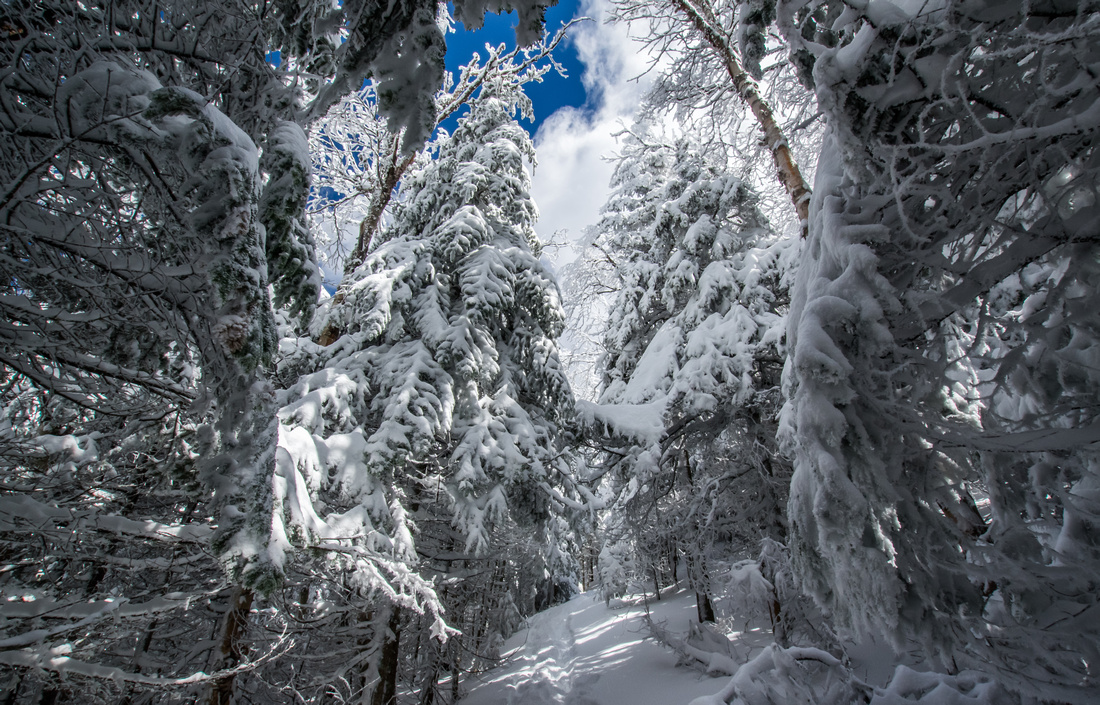 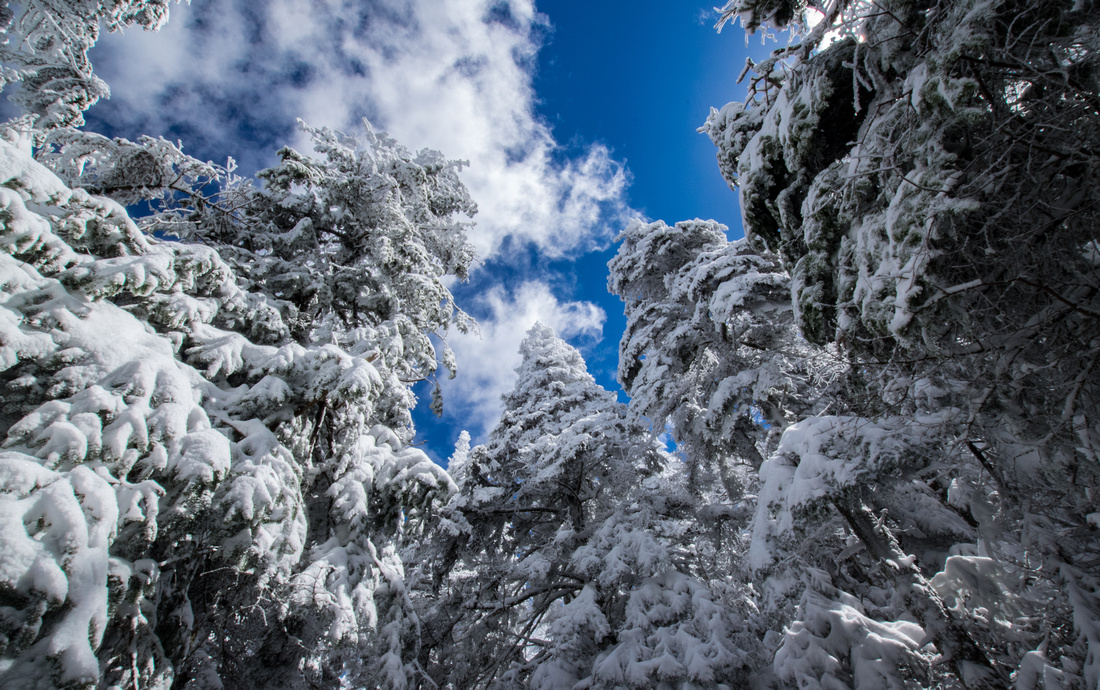 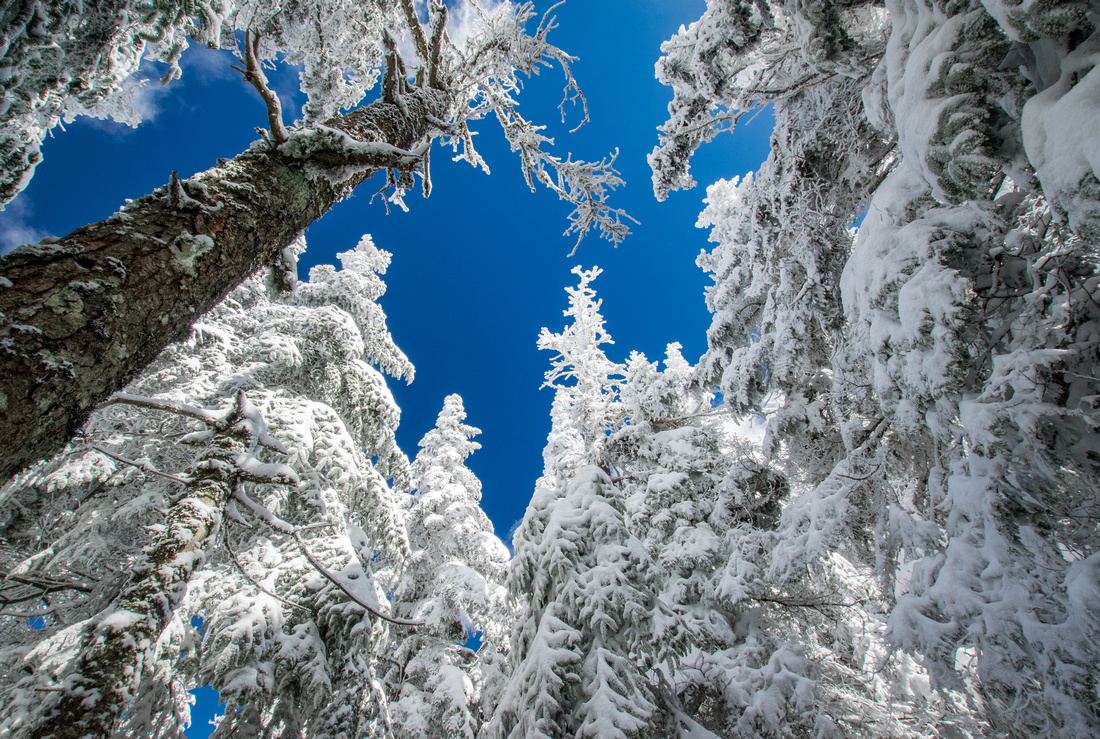 Just as I was approaching the edge where there are some stunning views of the snow-covered presidentials, I came to this spot and would not have been surprised if Sam the Snowman came around the corner with Rudolph singing 'Silver and Gold'. 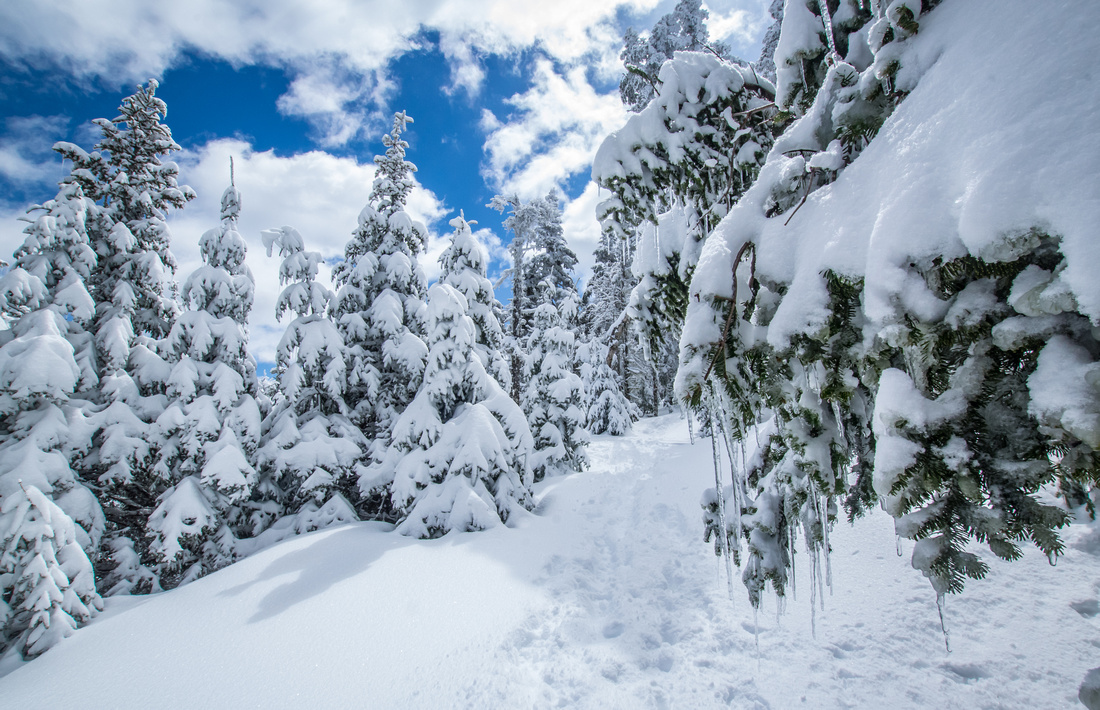 Now, on to those great views.  The mountain peak is said to have no views, a summit cairn in the middle of a small clearing surrounded by trees.  While this isn't the only peak without views, I'm amazed at how great the views are on some of these hikes from just below or off the summit.  A view is a view! Doesn't have to be from the official peak in my opinion.   That tallest peak in the middle/right is Mt Washington.  It was in and out of the clouds on this day, but I was able to catch of glimpse of the buildings and weather stations up there a few times. 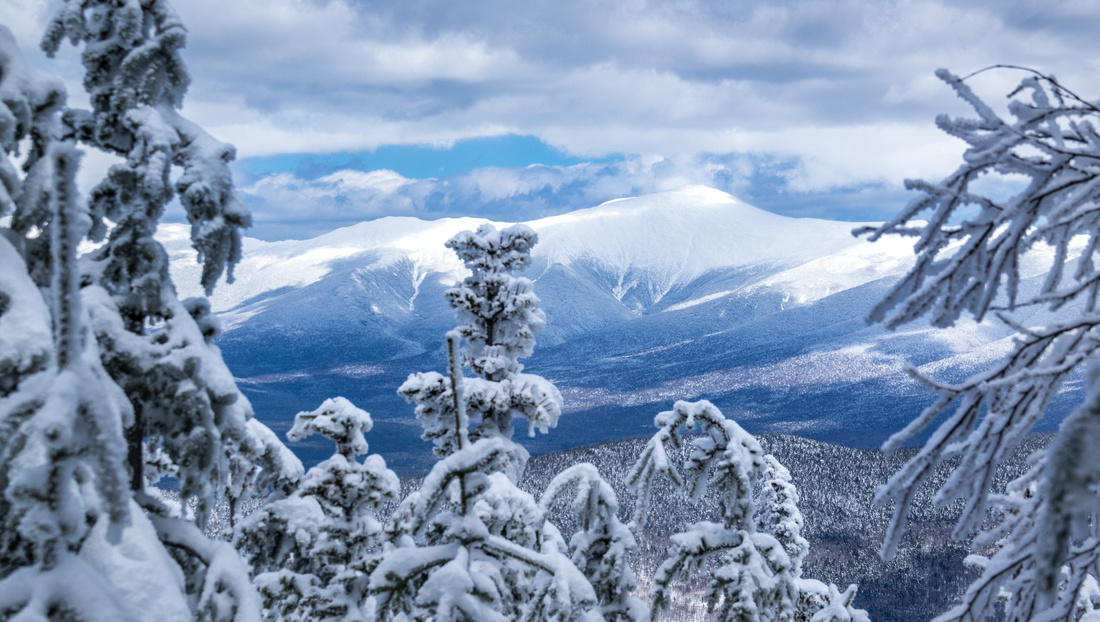 Someday, when just a few more of these dead trees give in to the brutal weather up here, this view is going to be even more breathtaking! 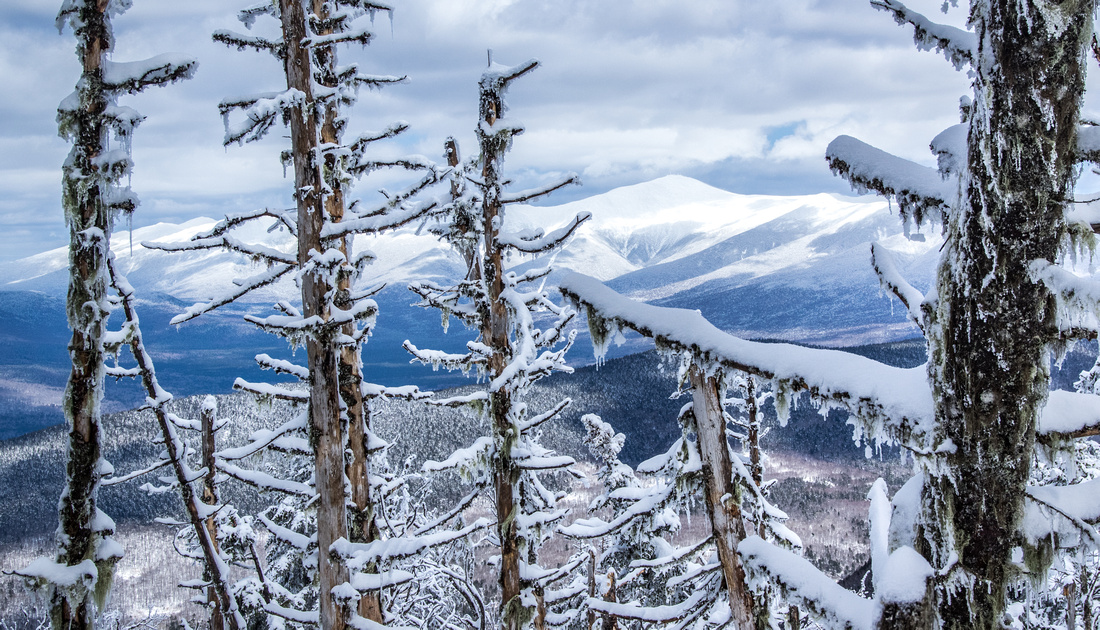 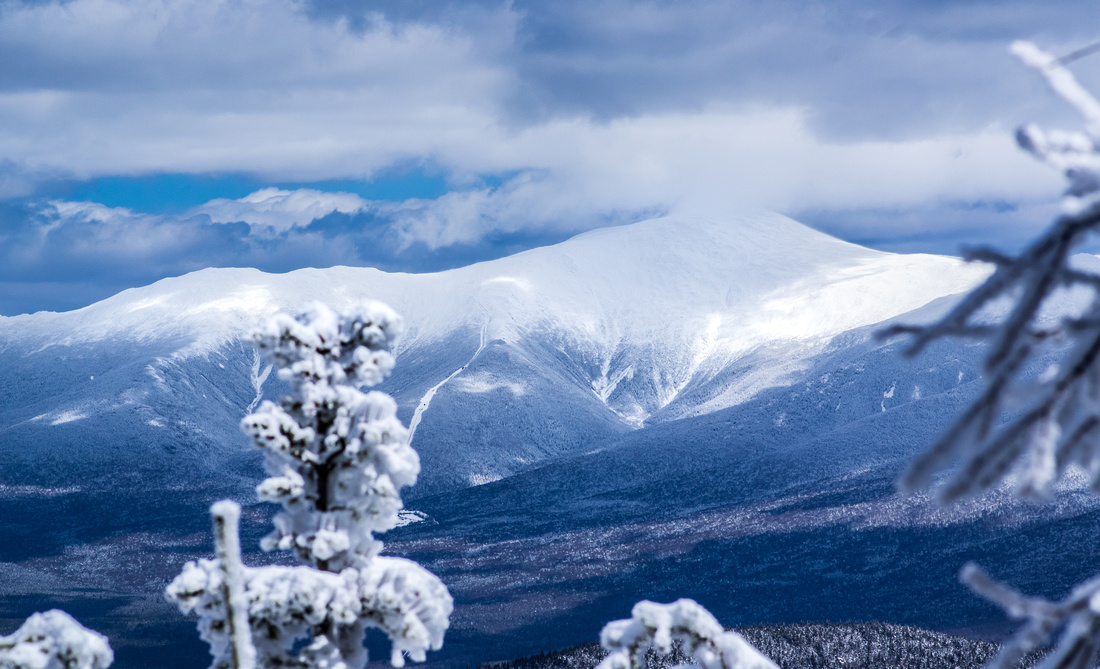 After searching multiple times, and not being able to follow the other hiker's tracks to the summit, I decided it was time to head down. The snow was very deep on top, I was the only one up there from what I could tell, my phone was dying, and the spruce traps were everywhere.  After one last attempt to walk in the direction that I could see where the summit had to be, but not being able to move through the snow and trees, I ended up back on my same tracks.  Doing an unintentional circle, alone, at approximately 4000' in close to 2 feet of snow was warning enough for me to call it, and give this peak a try some other day.  Defeated, but I knew it was the right thing to do.

On the way back down, the top of this tree made me laugh a little. It immediately looked like Mt Hale was giving me the middle finger!

One last little peak of Mt Washington through the snow-caked pines... 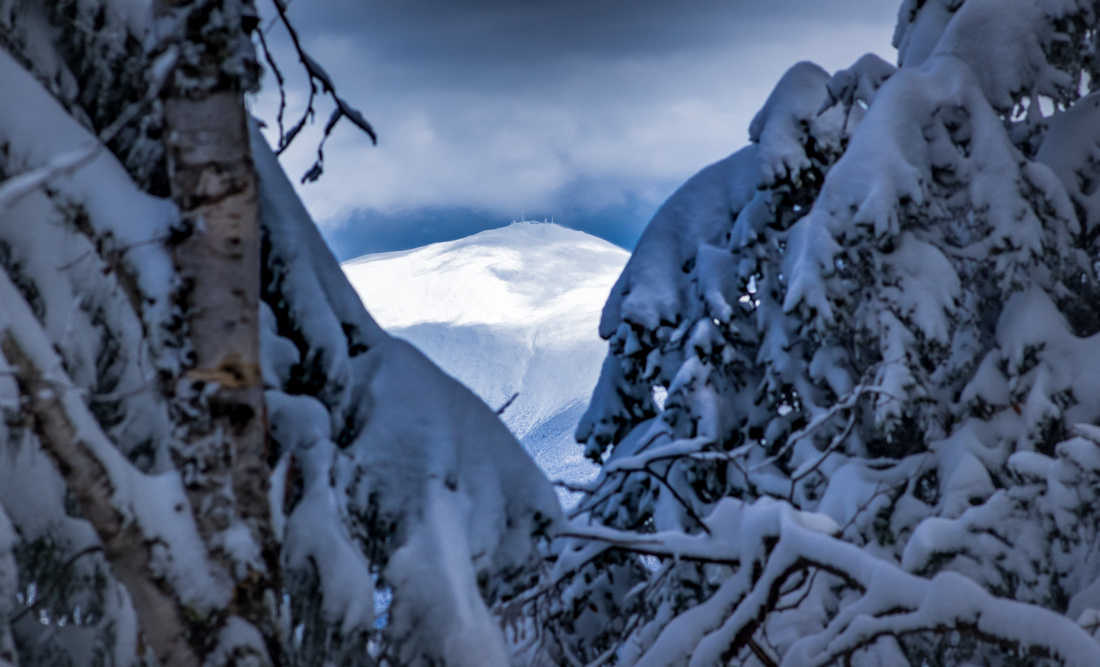 Once back at the river, it was time to eat some food, refill the water bottle and take some pictures while waiting for the drops to treat the water.

The long, solo three hour ride home has both it's detriments, and benefits. While it was long enough to fuel my frustration and have me continuing to second guess my decision to abort the hike so close to the summit, it was also long enough to relax, and put the day in perspective.  I've always wanted to see 'The Whites' immediately following a fresh snow.  I've always wanted to do a hike where I didn't run into another person all day. (close enough, only saw one on this day).  And, most importantly, Mt Hale is still there.  I can hike it again another day in totally different weather, with totally different conditions for a totally different experience. (and cross it off the list this time!)