Around this time last year, I had just summited Mt Adams, and Mt Madison via the King Ravine Trail. (read that blog post here) After showing some friends the photos and telling my story of that hike, a few of them instantly said they would love to try it, and asked me to take them up there and I promised them I would.  On this seemingly insane quest for the 48 peaks, I've always vowed not to repeat a hike, until I've completed all 48.  I don't now how many more miles these knees have in them!

However, a promise is a promise (Forest Gump, 1994) and with the added (arguably selfish) goal to tag Mt. Jefferson after retuning with them to Adams, a date was selected and we set out early on the 27th to tackle the two northern presidential peaks.

We do not live close to the Appalachia trailhead, so the 4am pick-up meant we began hiking a little before 7:30.

The first real photo opportunity on the Airline/Short Line trail route to the King Ravine trail is Mossy Falls.  The falls were as beautiful as I remembered them, and on this trip I decided to capture a shot a little further downstream from the actual falls. 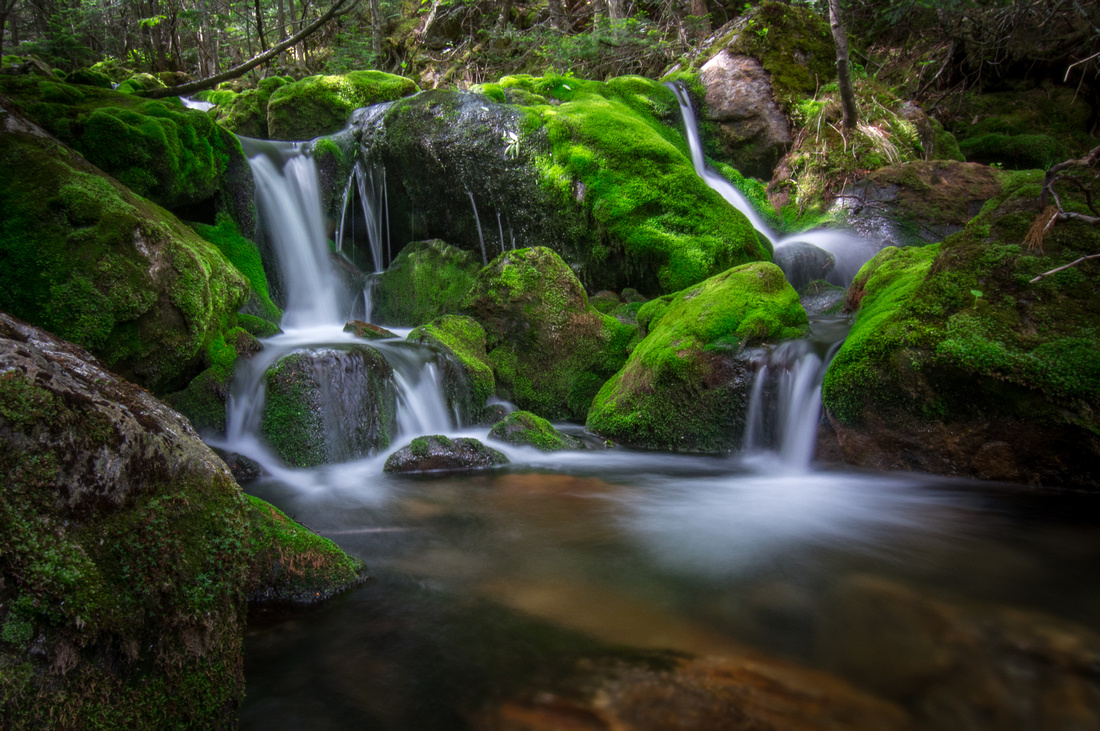 As mentioned in my blog from my original King Ravine experience, the hike is fairly benign up until the falls. After a full refill of the water bottles in the freezing cold falls, within less than a minute, the warm up portion of this hike is over, and you begin some serious rock scrambling.

Within a short distance, you have the option (which we all did) to scale up one of the largest boulders in the lower section, for a mind-blowing first real view of the ravine.

For those of you who recognize this view, you know that the real fun is about to begin. For those of you who do not, as myself and so many others have said, pictures do not do this trail justice.  It is steep, but it is a ton of fun.  It is one of the toughest challenges in The Whites, even if only for a short distance, but it is very rewarding. My second time up this trail and it did not disappoint.  My hiking companions killed it on this day, too. We made sure to take plenty of rest breaks on the way up, and most importantly, look behind us to take in the views.  My first time up this trail was a solo hike.  Using the timer on the camera, I was able to get a few shots of myself climbing up the headwall. On this day, I'd hike ahead and get some better pictures as they hiked up to meet my position. 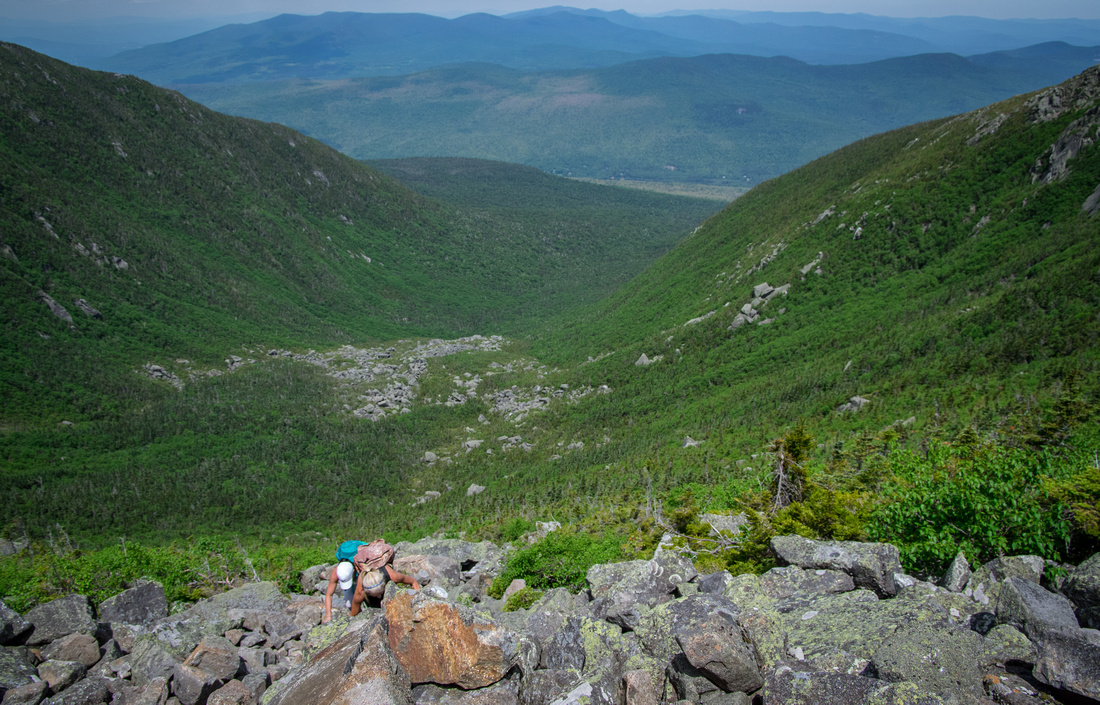 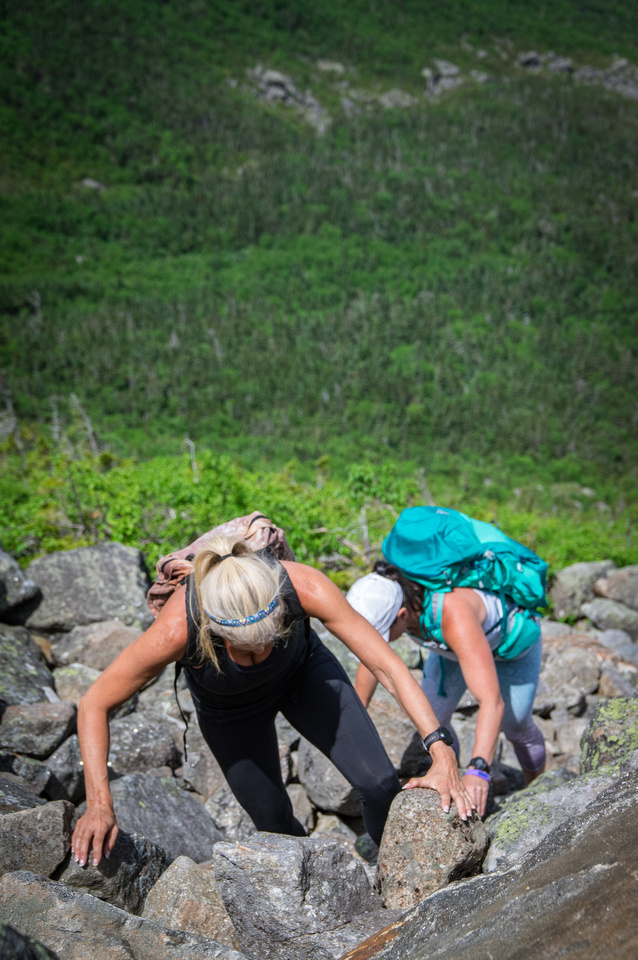 When you reach the top of the King Ravine trail, you technically arrive nowhere except a little over a 1/2 mile from the summit of Mt. Adams, or a little under a 1/2 mile from the AMC Madison Spring Hut. We didn't have any reason to head north towards Madison, so we made a bee line for the summit of Adams. The King Ravine trail will wear anyone out, and we were no different.  The slightly more than .6 miles to the summit of Adams was steady, but a little slow.  Slow enough to allow a great photo opportunity with Mt. Madison and Star Lake as the backdrop. 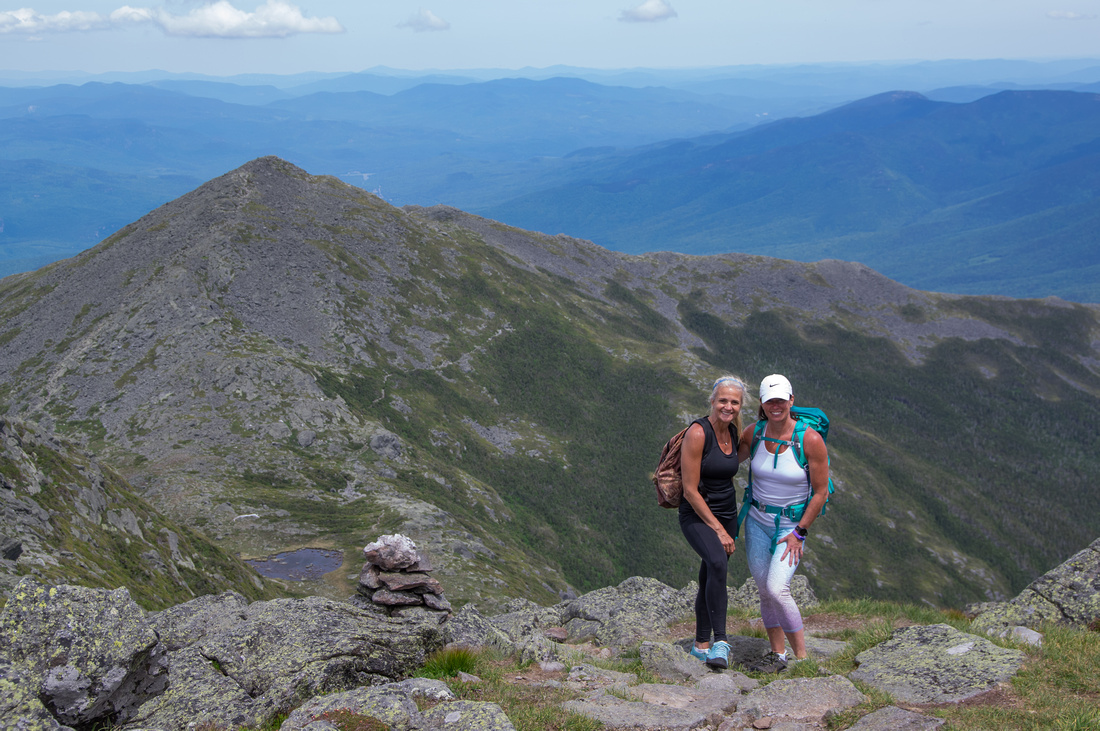 Not long after that picture was taken, I turned more westward to get a view of the ravine we had just 'conquered' 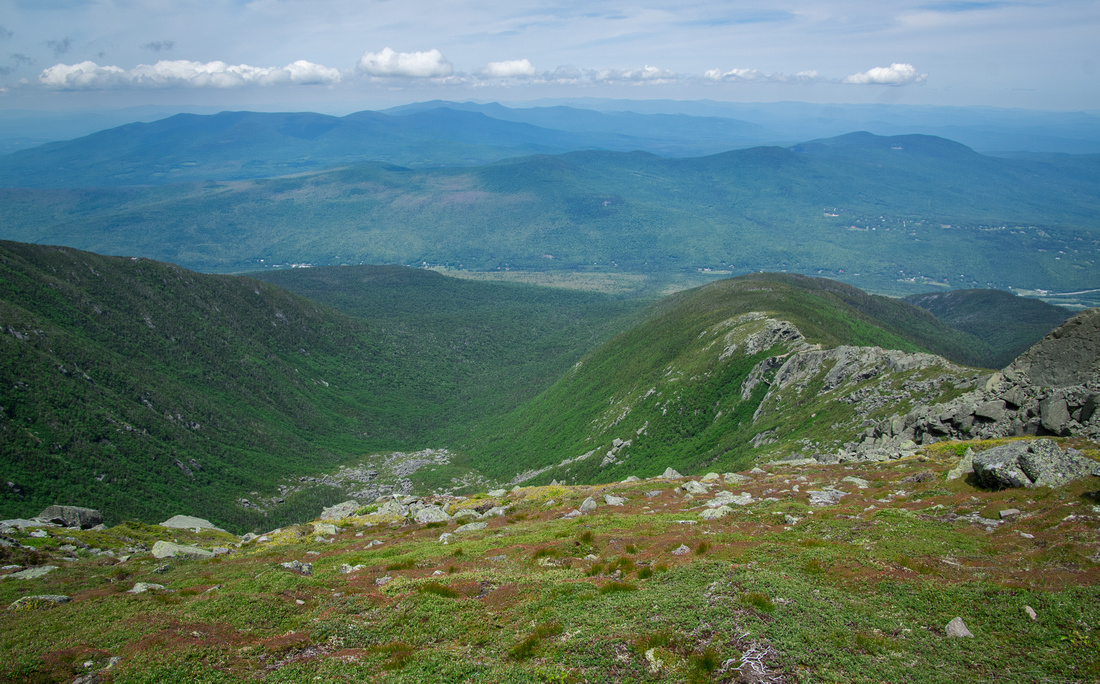 Next, to the summit of Mt. Adams. New Hampshire's second tallest peak, at an elevation of over 5700' which, apparently is ideal if you're a moth, mosquito, black fly, regular fly or any other flying, swarming insect.  Needless to say, it was celebratory summit photo time, and then quickly time to the hike towards Jefferson with the bugs winning this virtual windless day. 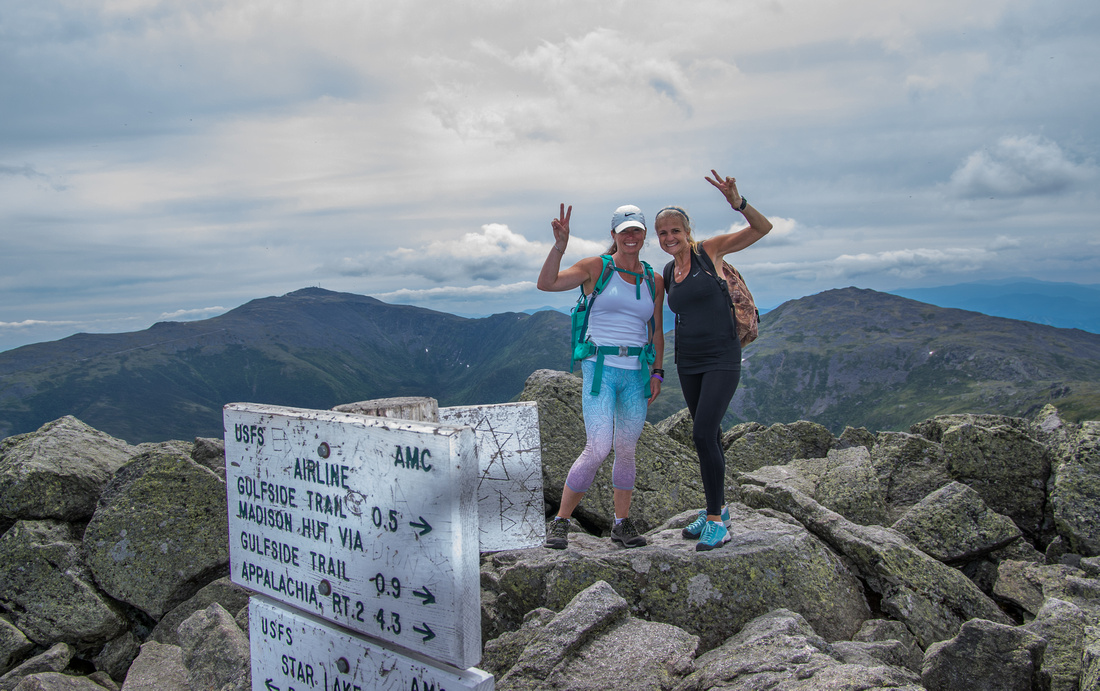 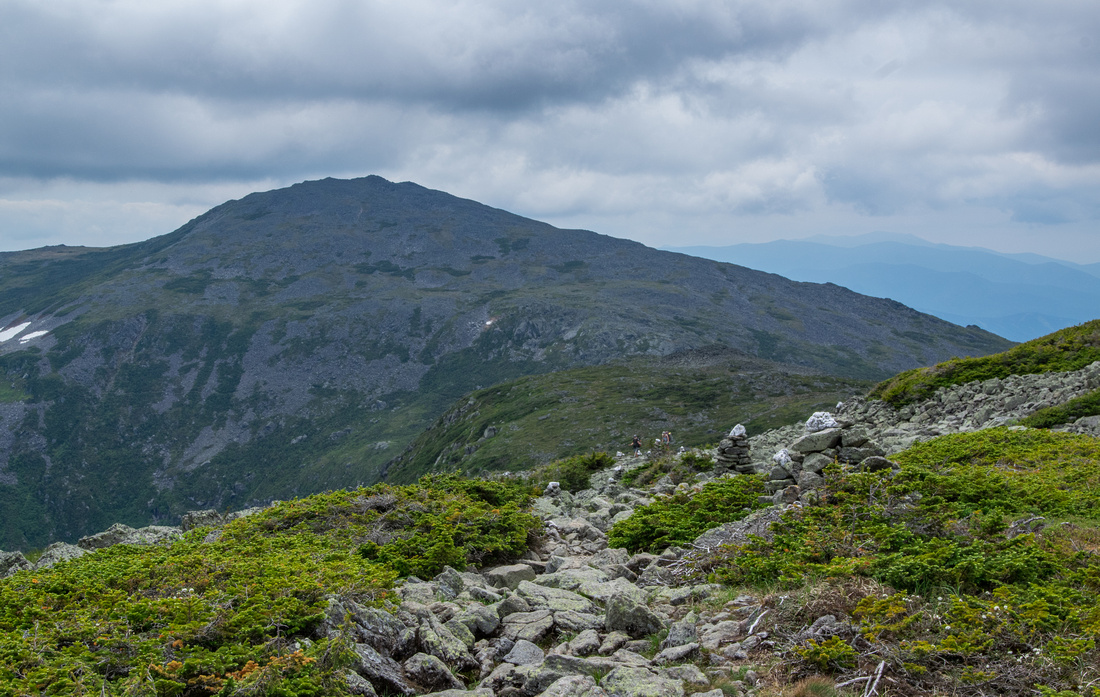 That white spec approximately in the center of the picture above, is one of the last remaining snow patches that linger on the Presidential Range.  Some time later, our chosen trail would pass right through the snow. 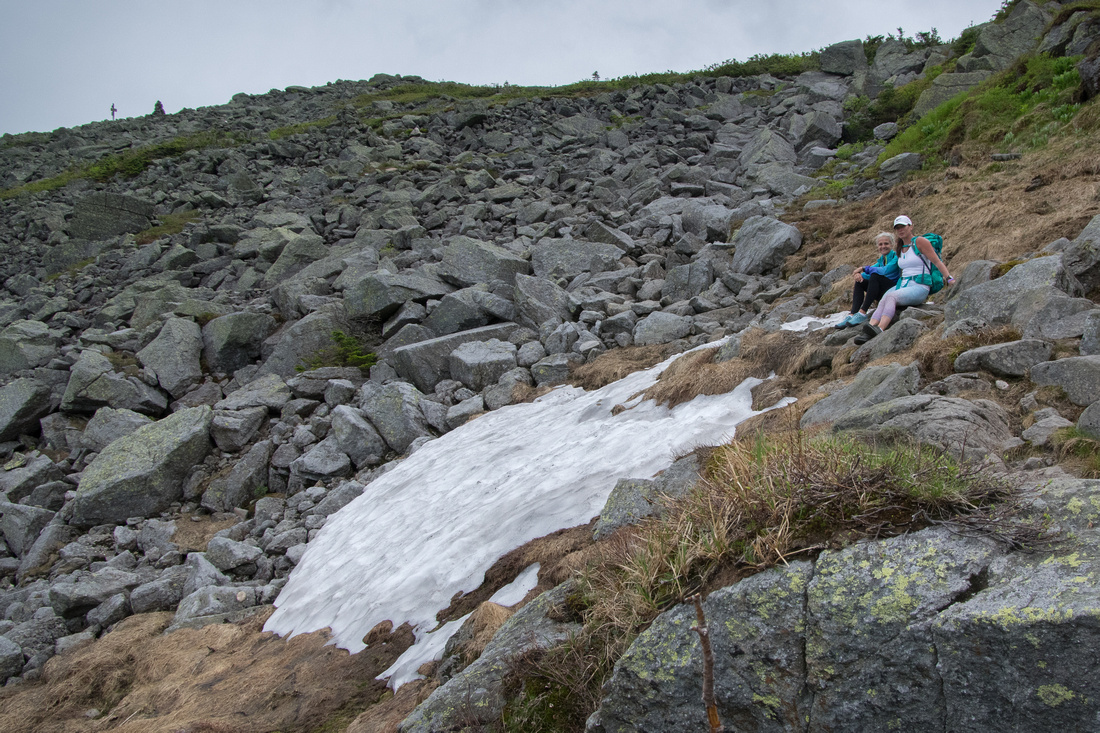 On our approach to Jefferson, a look back at where we had just hiked from. 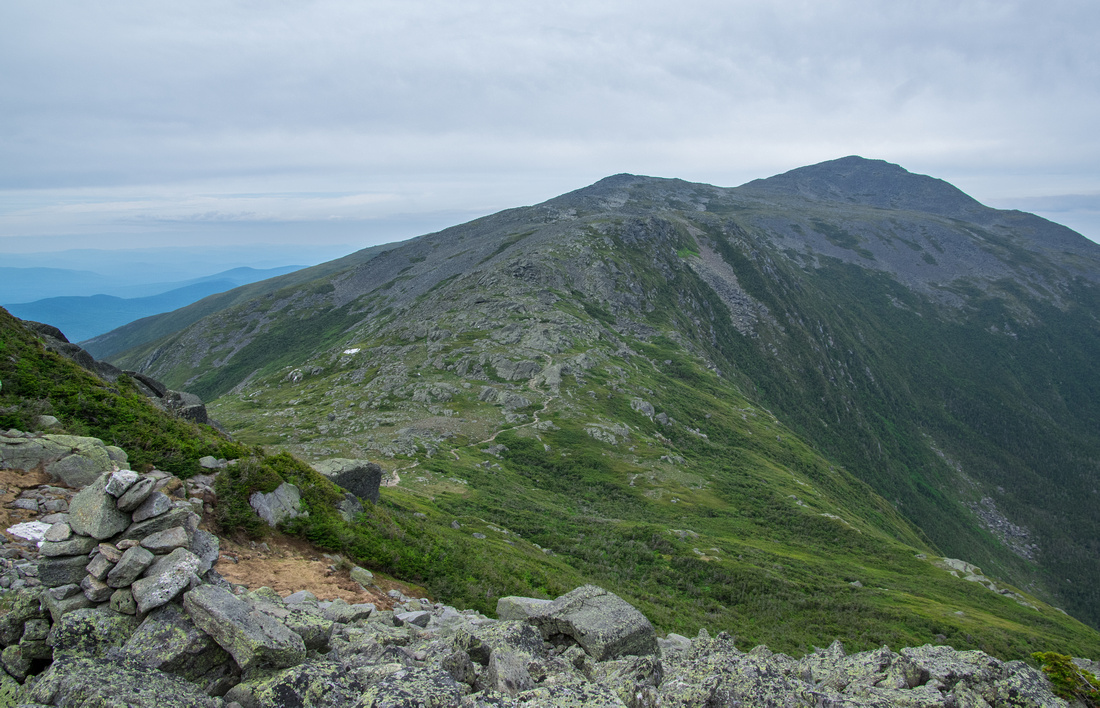 We finally arrived and stood on the summit of Mt. Jefferson and made use of the self timer for their 3rd 4000 footer, and my 26th. 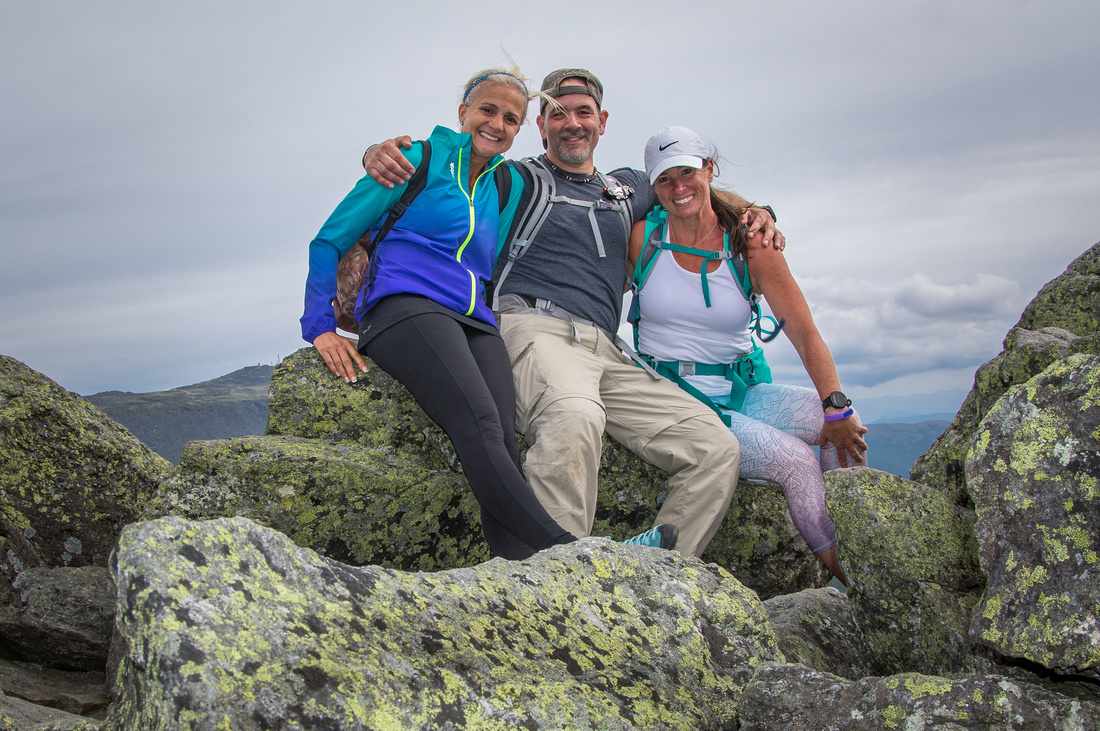 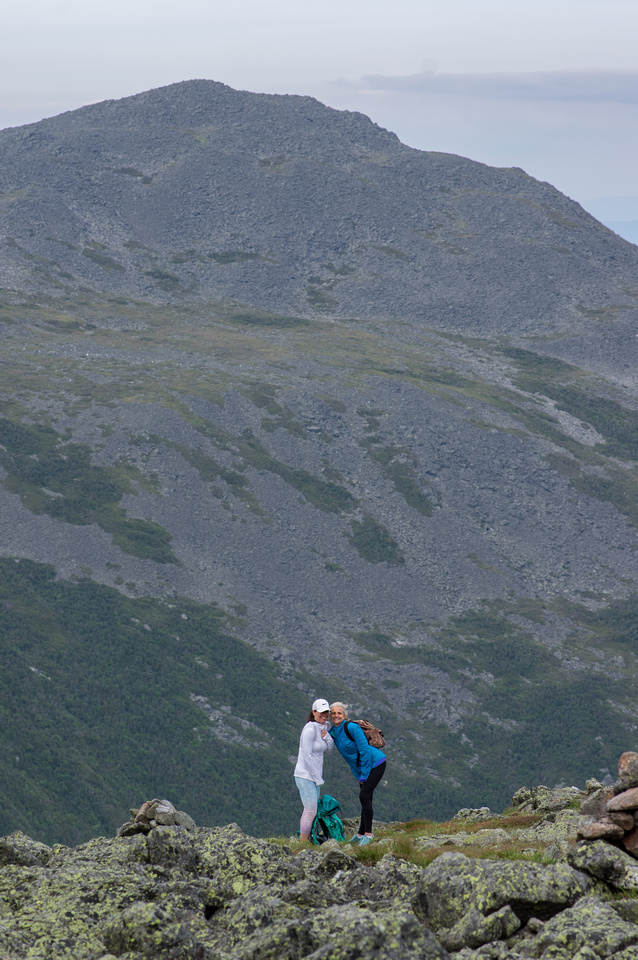 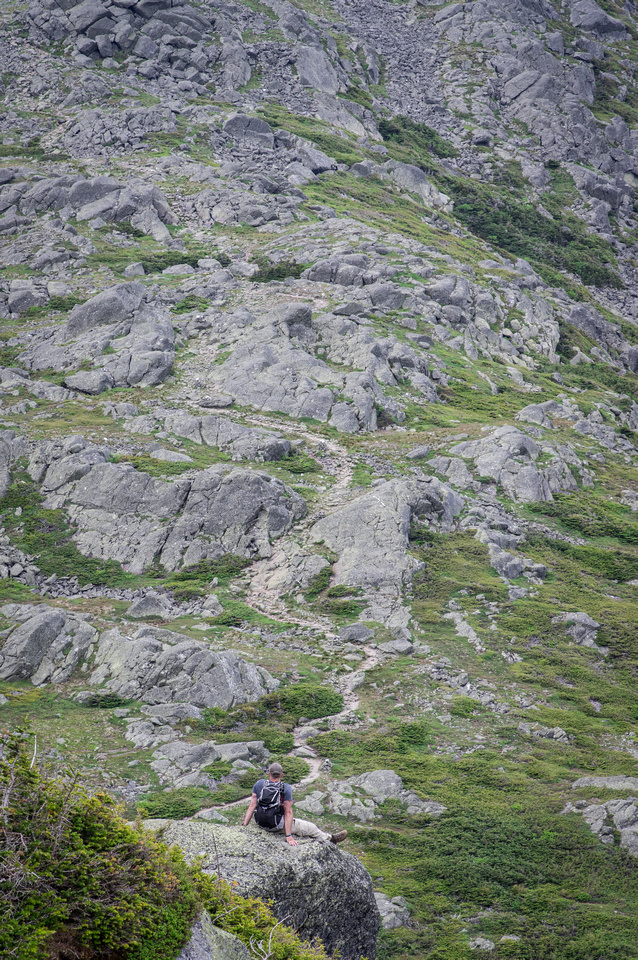 One of the themes for today would be that even though it wasn't a washout, it was very humid and hazy.  So while you don't get those million dollar clear views on days like this, you do get great mountain layers type views all day long.  Such as these. 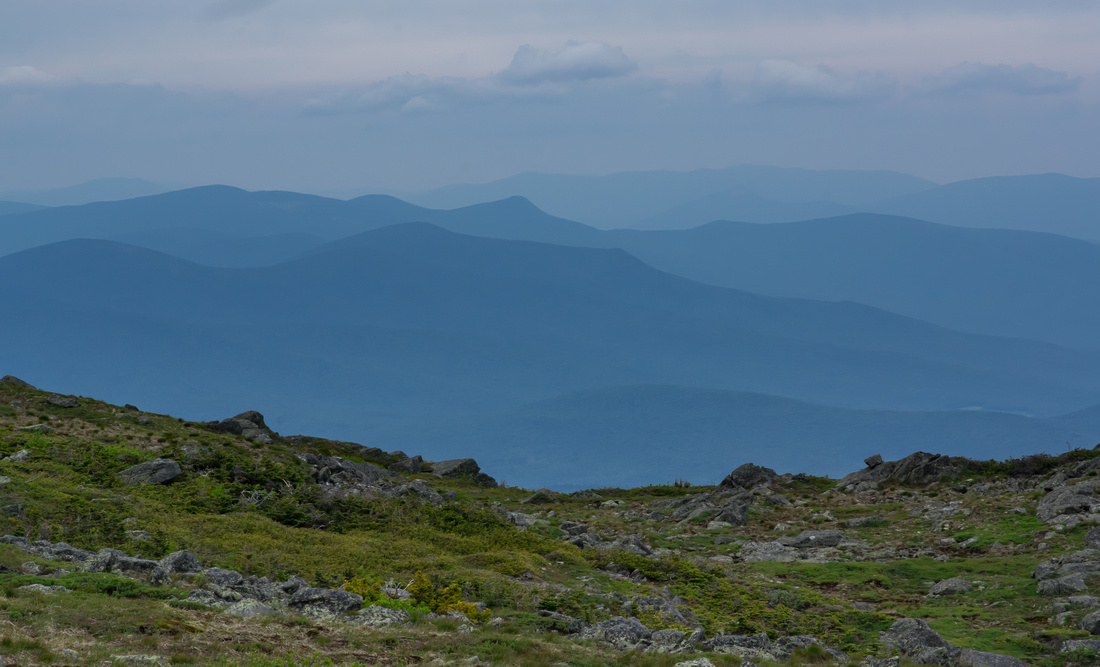 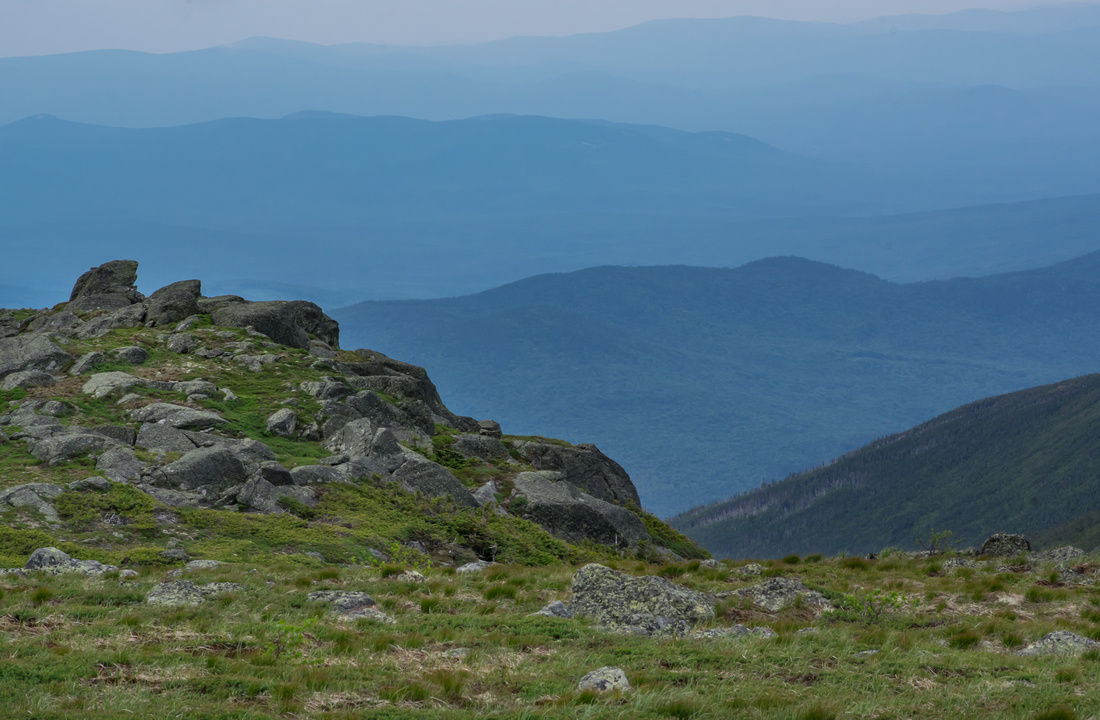 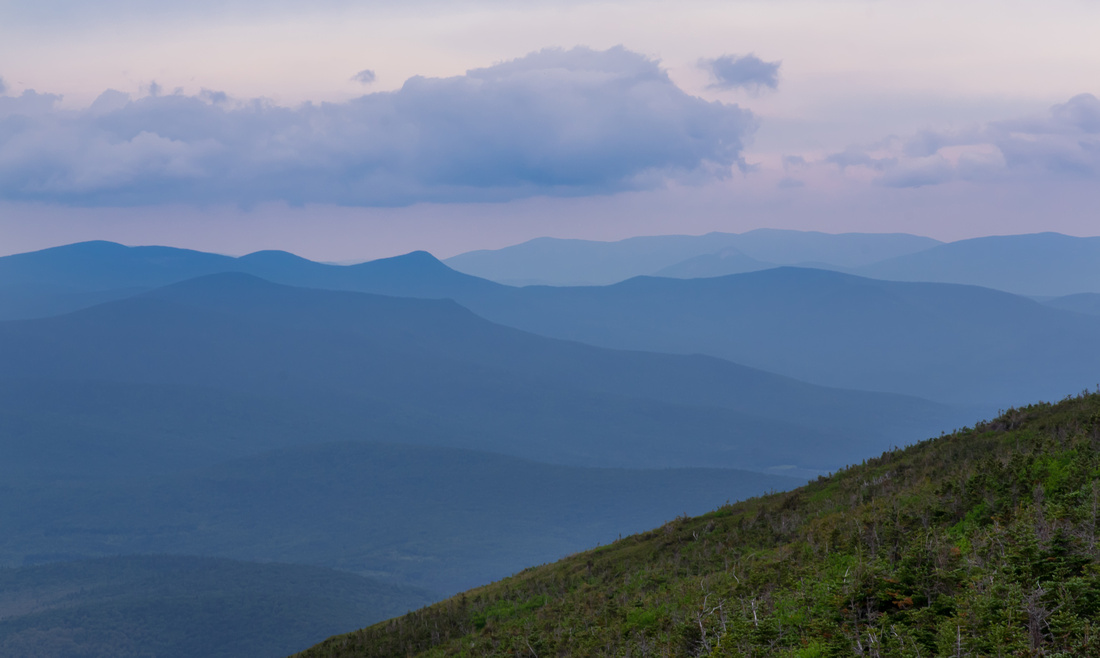 If you're scratching your head and looking at a map and wondering if we're still a mile from the Gray Knob cabin at this time, and we need to get back to the Appalachia trailhead, that it's going to be dark before we get there - you'd be correct. I had under-estimated the timeframe on this hike. Between three GPS watches, several iphones, an online app and two paper maps, every device and measuring unit had our route at anywhere from 11.22 miles to 14.6 miles, most closer to the 14 mile mark.

Needless to say, lots of lessons where learned on this day.  Having a pre-planned route with specific trails mapped out, having the ability to read a map and contour lines,  use a compass, trusting a GPS with confirmation of your paper map, having pre-planned water sources along the route, and having the necessary gear in case you do have to spend the night, all allowed us the confidence to swiftly move from trail to trail without one wrong decision. Sure it was headlamp time about an hour prior to reaching the truck, but we got back to exactly where we planned on, without a single error or injury along the way.

The last lesson learned is pay attention to those WATCH FOR MOOSE signs. Only a few minutes after leaving the trailhead, it started to pour. And about 3 miles from the trailhead, a massive bull moose stepped onto to Rt 2 right in front of us.  We barely saw the black 1000+ pound animal in the darkness of night with the pouring rain.  A beautiful animal, but a car-wrecker for sure!

Twenty-six down.... twenty-two to go.