The quest for 48 continues

My quest to reach the summit of all 48 of New Hampshire's 4000' peaks as officially reached double digits. This past weekend, I climbed Mt Willey, Mt Field and Mt Tom, peaks number 8, 9 and 10 for me. (I know, still a rookie. But you've got to start somewhere.)

I approached this hike with three specific goals.  First, and most obvious, was to reach the double digit mark on my quest for all 48 summits. Second, I had seen many photos of the Willey Range Trail wooden stairs.  I wanted to climb these myself, which meant I needed to make this a south-to-north trip reaching Mt Willey first, and Mt Tom last. My last goal was mostly out of my control, however, I had also read that these three peaks were some of the most common to see a gray jay.  After seeing numerous photos and videos of other hikers feeding these jays right out of their hands, I had to experience this.  As an added challenge, I hoped to capture a self portrait of me, and a gray jay, using my wireless remote trigger.

So, with the alarm off at 3:30am, and a three hour ride to the trail head behind me, I entered the parking lot of the Willey House at approximately 7am... and 49 degrees!  I pulled into the lot just as two other cars entered. After a brief conversation, I learned that the other two people were dropping one car off, and heading back to the AMC Crawford Notch Highland Center, and doing the exact route as me, only in reverse.  They offered to take me with them, to save me the three mile road walk at the end of my trip, but... those stairs! I just had to go up, not down, those stairs.

We said our 'good lucks', they drove off, and I began my hike on the Kedron Flume Trail, located behind the Willey House. The Willey House is the historic site of a tragic land slide which claimed nine lives.  Mt Willey is said to be named after the family. 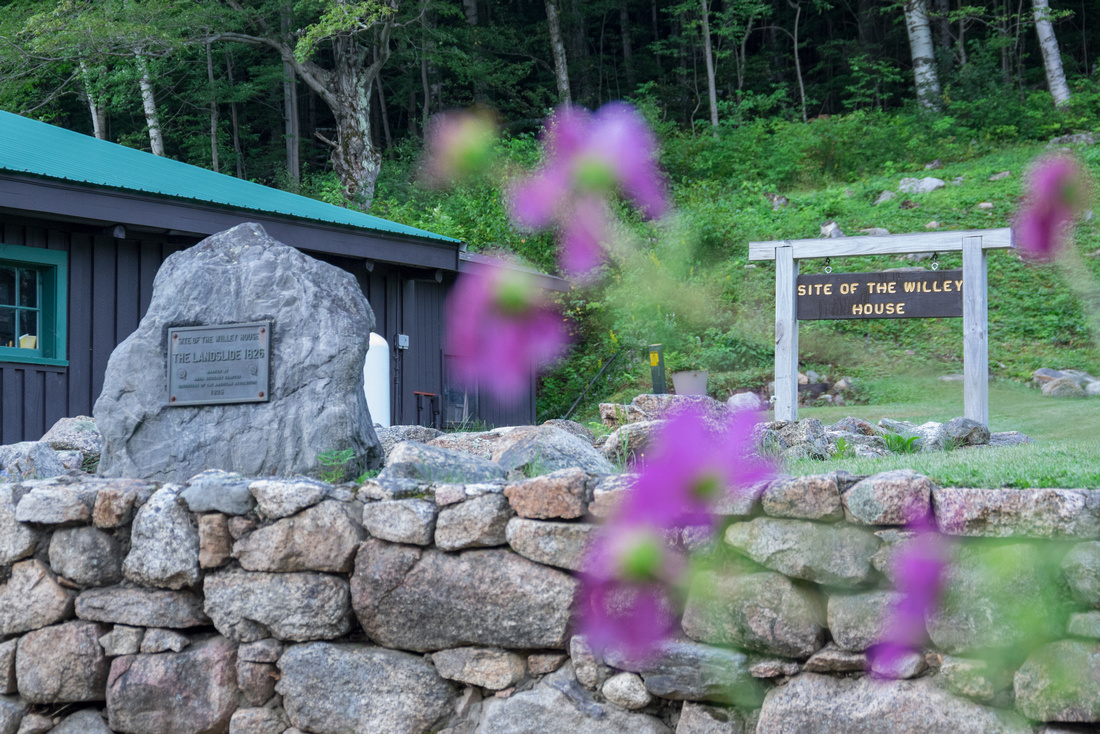 A relatively short distance into the hike, and I came upon a very dry Kedron Flume.  Not much water flowing through here on this August day, but it was an awesome spot with a great view, and less than an hour into the day. 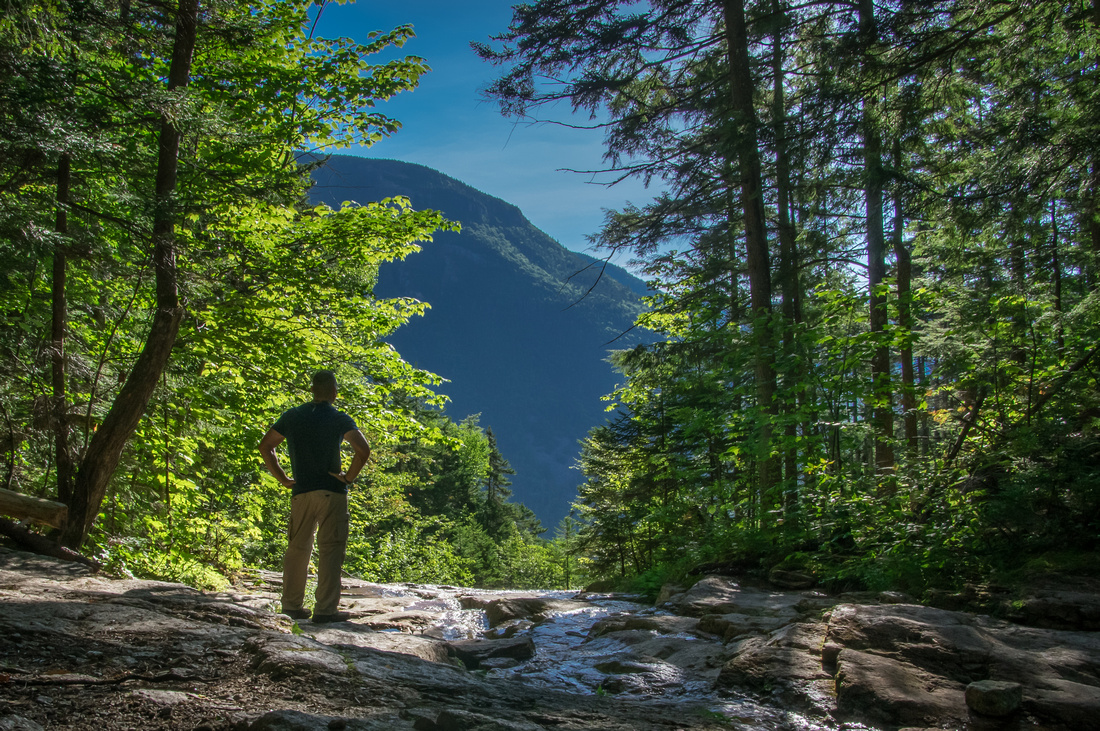 After the Kedron Flume Trail, I took the Ethan Pond Trail a very short distance to the junction of the Willey Range Trail. I was getting closer to seeing the string of nine wooden staircases, but not before I had to ascend this section. 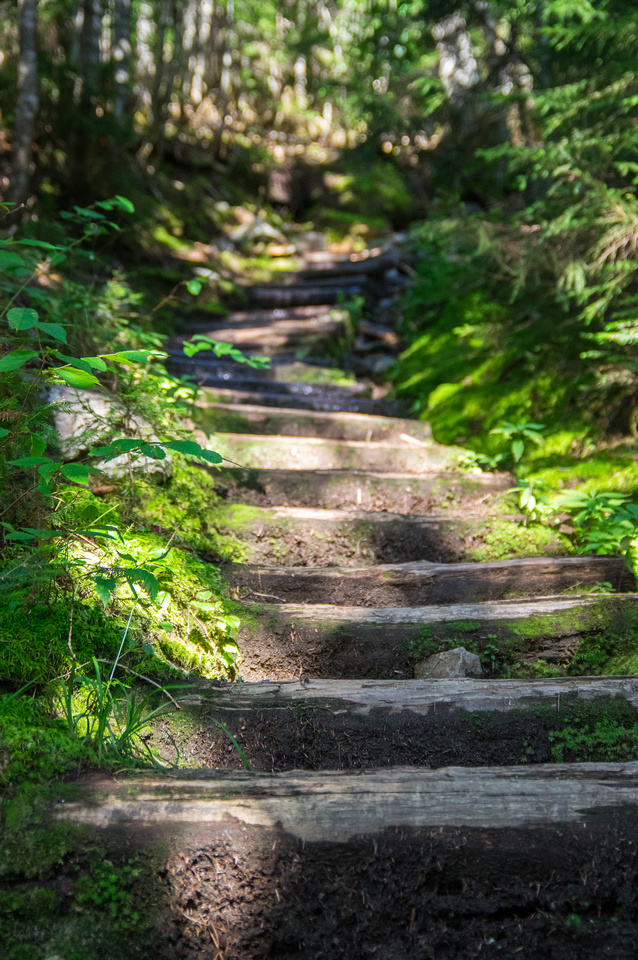 Before long, the first of nine wooden staircases was in front of me.  I would love to shake the hands of the people who worked on this section.  It is incredibly steep, yet, incredibly easy to climb thanks to these structures. Once I reached the top, and looked back down, I was very happy that I decided to climb up, and not down, these stairs! 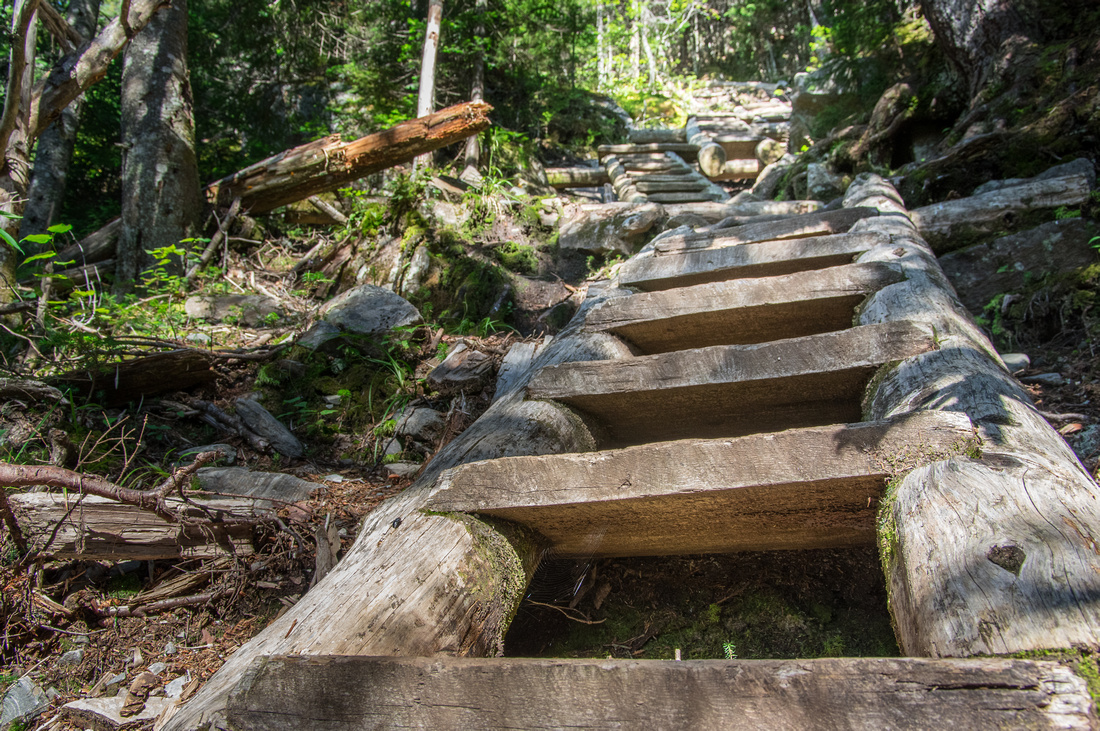 Too often I hike with my head down and forget to actually enjoy the journey. I wanted to take some extra time today to not just check summits off a list, but to consciously enjoy the hike itself. I wanted to take notice of the small things, and actually look behind me every now and then.  Such as this spot.  Simply stopping for a moment and turning around, awarded me with this view. 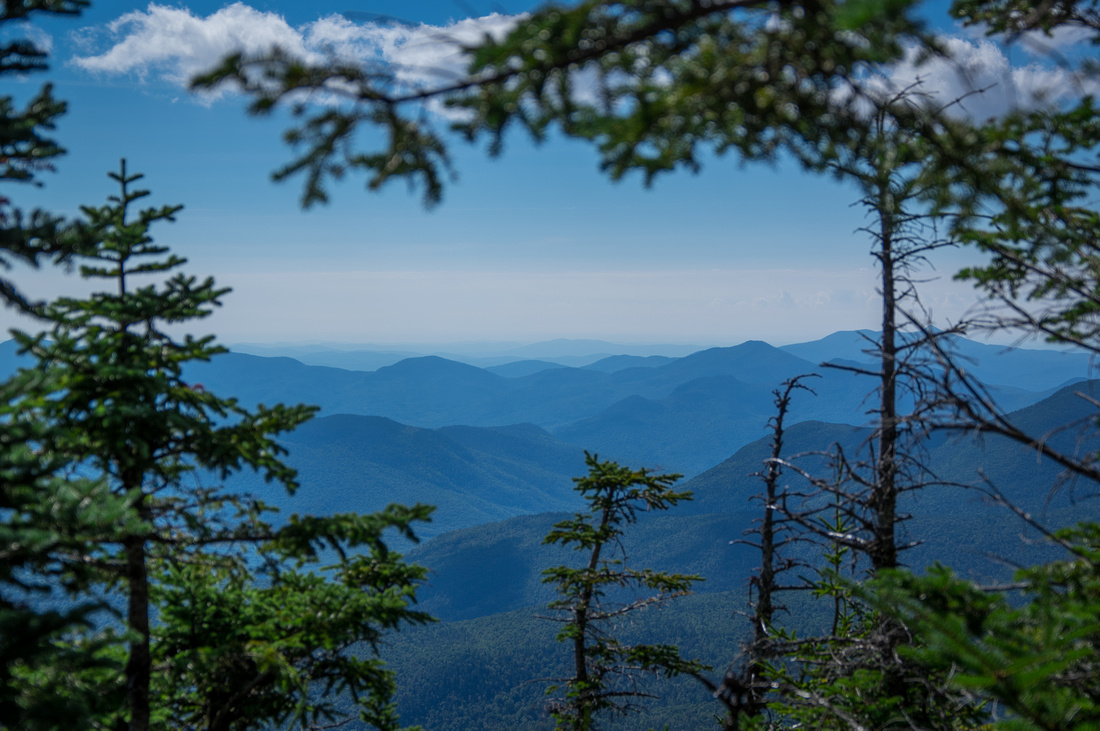 The staircases are not exactly near the summit. However, with several very steep and challenging sections behind me now, I reached the look-out ledge of Mt Willey (just below the official summit cairn).  The view on this day was amazing.  Looking out and to the left, I had a clear view of Mt Washington (first peak on the right) and the presidential range. 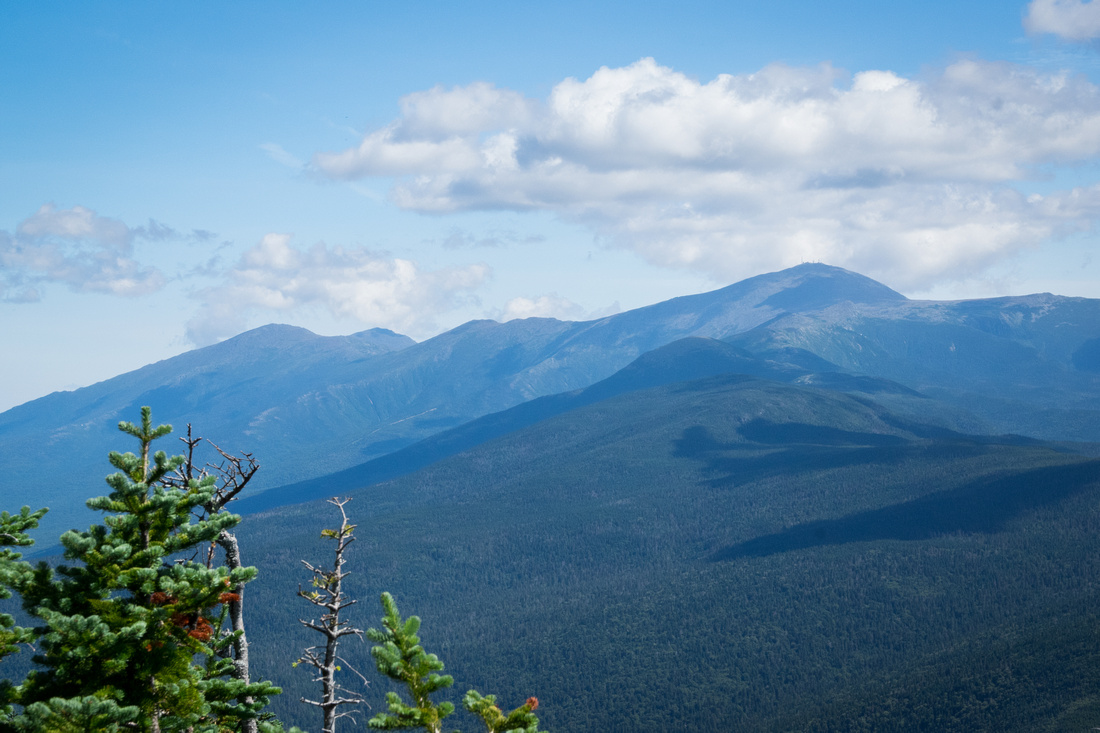 Looking more to the right, you can just barely make out Route 302 (where my truck is!), and the railroad bed as they carve south down Crawford Notch. 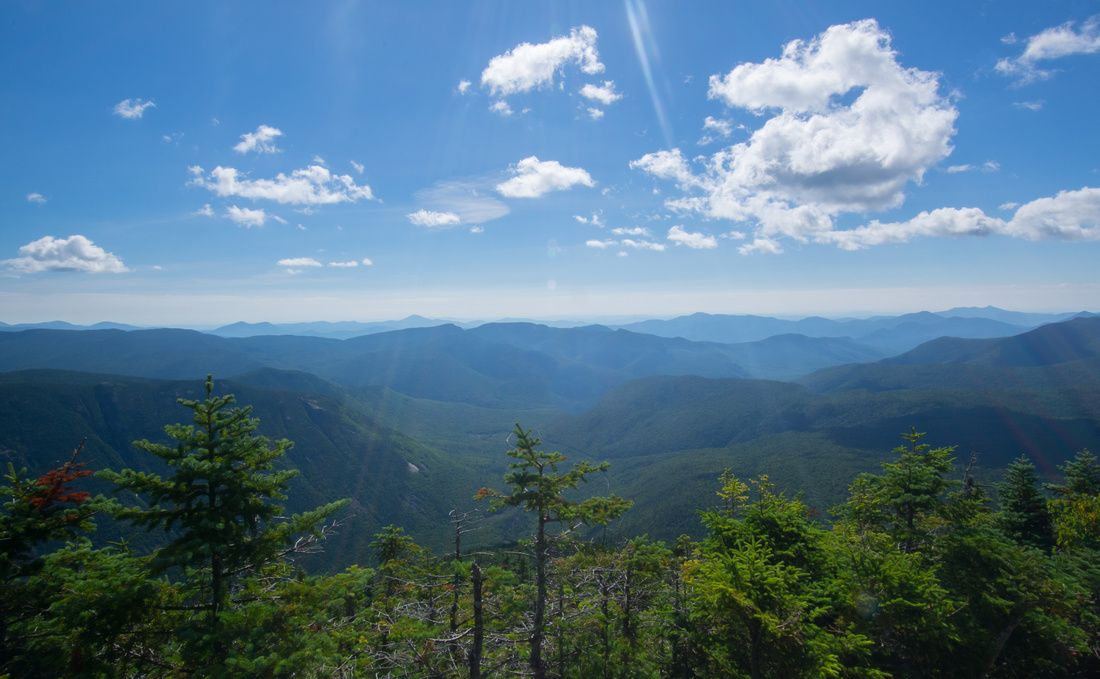 One down, two to go.  On to Mt Field. The hike to Mt Field, from Willey, has a few ups and down, but is extremely easy overall. Here's a few pictures of some of the small treasures along the way. 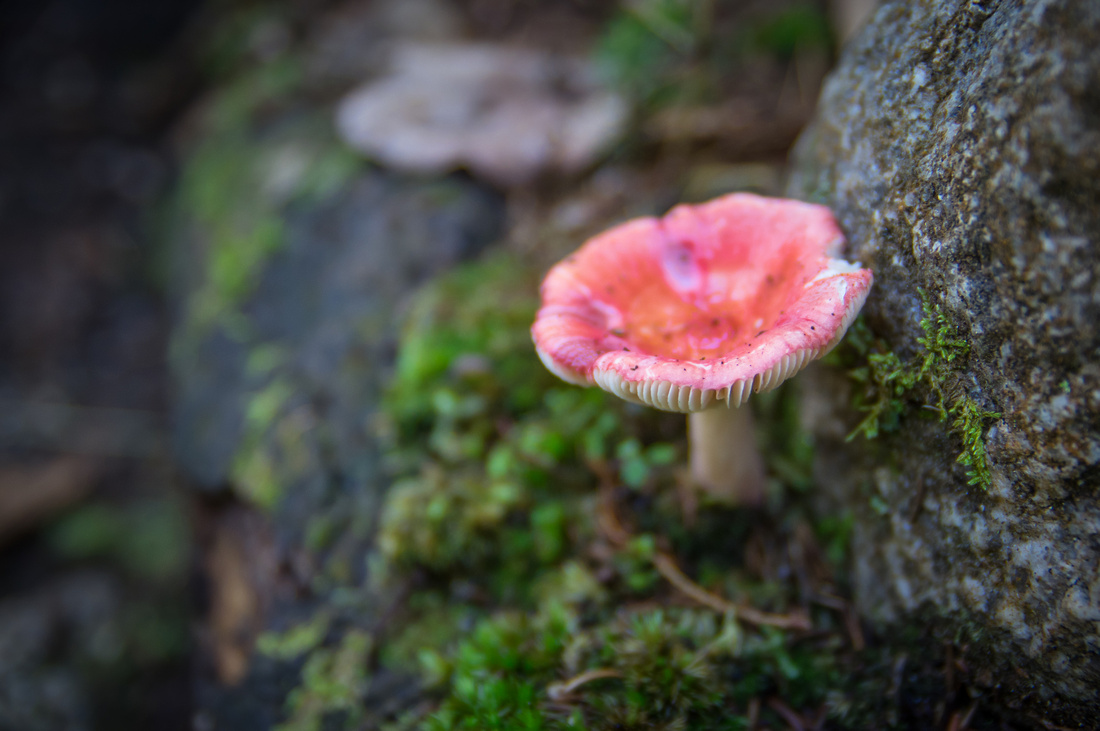 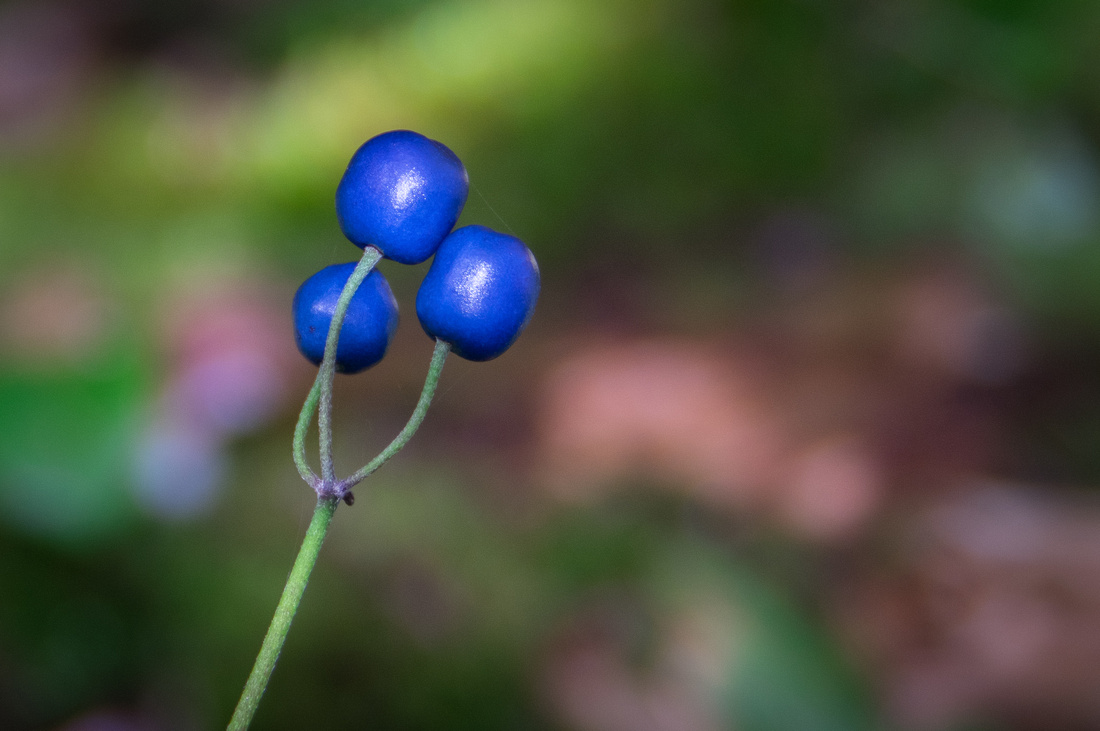 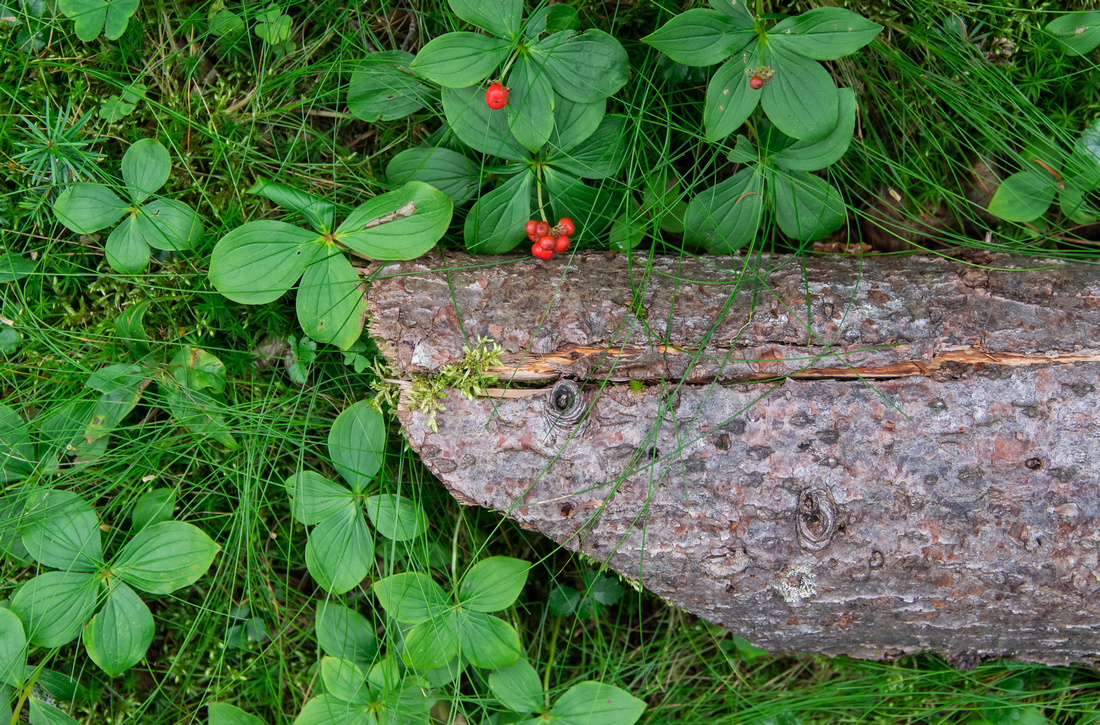 Before reaching Mt. Field, I passed through the section of the trail which had been damaged during either Hurricane Sandy or just a microburst.  Either way, the trail maintenance was superb! 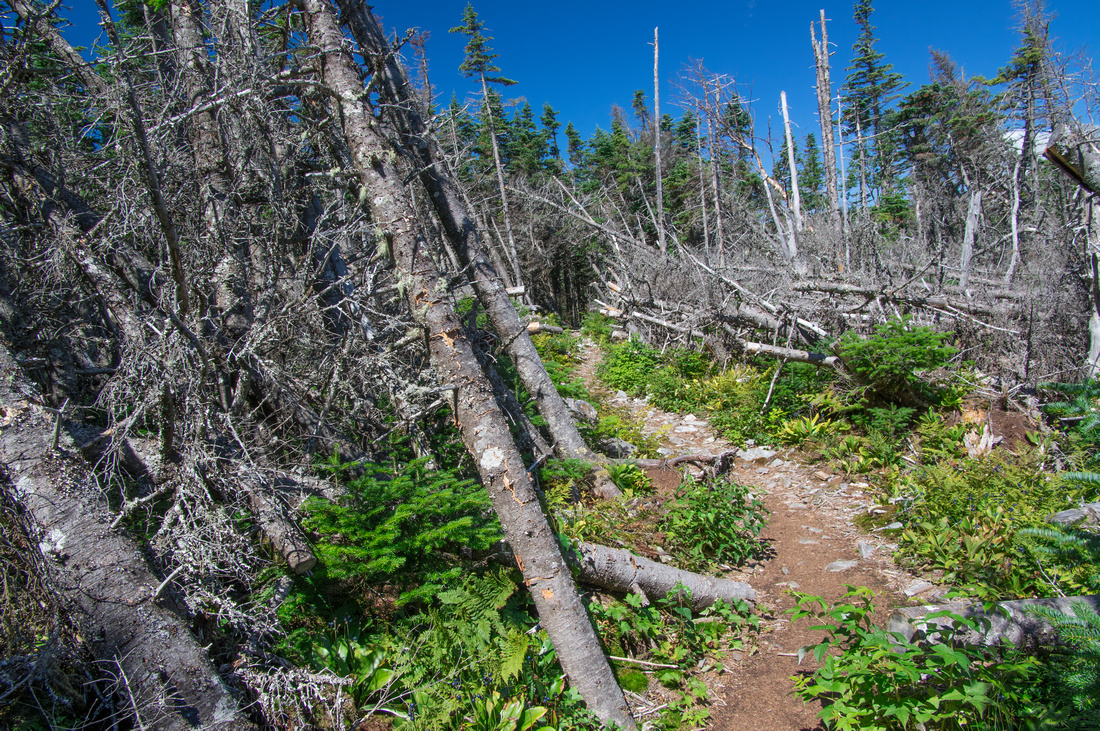 When I reached the summit of Mt Field, there were several groups of people enjoying a snack, and the view.  Without much space to myself, I snapped this photo from the look-out point with the Mt Washington Hotel in clear view below, and then headed along the trail to Mt Tom. 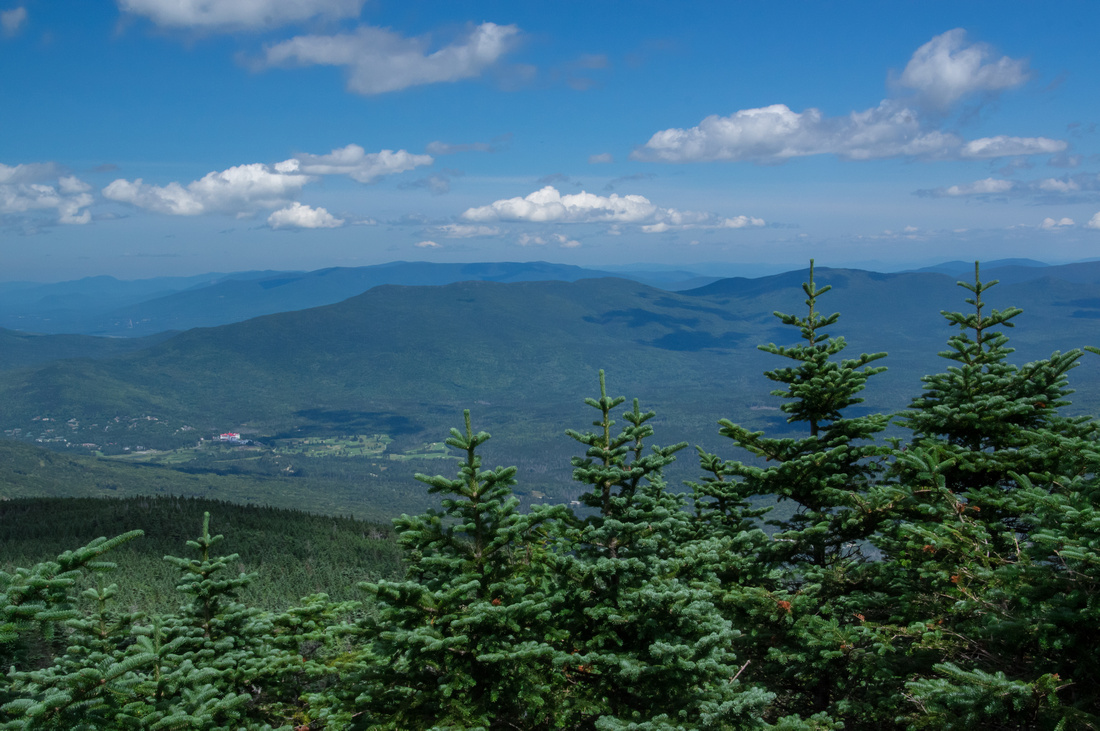 On my way to Mt. Tom, I passed two other hikers going the opposite way.  They asked me if I had any food.  I thought that was an odd question, but maybe they were really hungry. I told them I had some, and asked why.  They said that Mt Tom had about 3-4 gray jays up there, and they were just eating out of their hands and landing on their heads!   I was fairly tired, and in contrast to the early morning temps, it had been a very warm day.  I wont lie, this kind of news definitely re-energized me.

A very short distance down the A-Z trail I reached the Mt. Tom spur trail.  The sign read .6 miles to the summit. I no sooner arrived at the top, and the trail splits. Not knowing which way to go to find the summit cairn, I went to the right, followed it through a maze of pine trees, where it abruptly ended in a tiny clearing. I looked back where I had come from trying to get my bearings and decide where to go next when I saw one... then two.. then three gray jays, all following me to the clearing.  Before I could sit down, take off my pack, and find my trailmix, three gray jays were sitting in branches and dead-tree perches within feet of me.  I know I'm probably about the 9-millionth person to experience these little birds and their tolerance for people, but that doesn't take away from how cool it was to experience this.  And yes, after a little trial and error, I got my gray jay selfie! 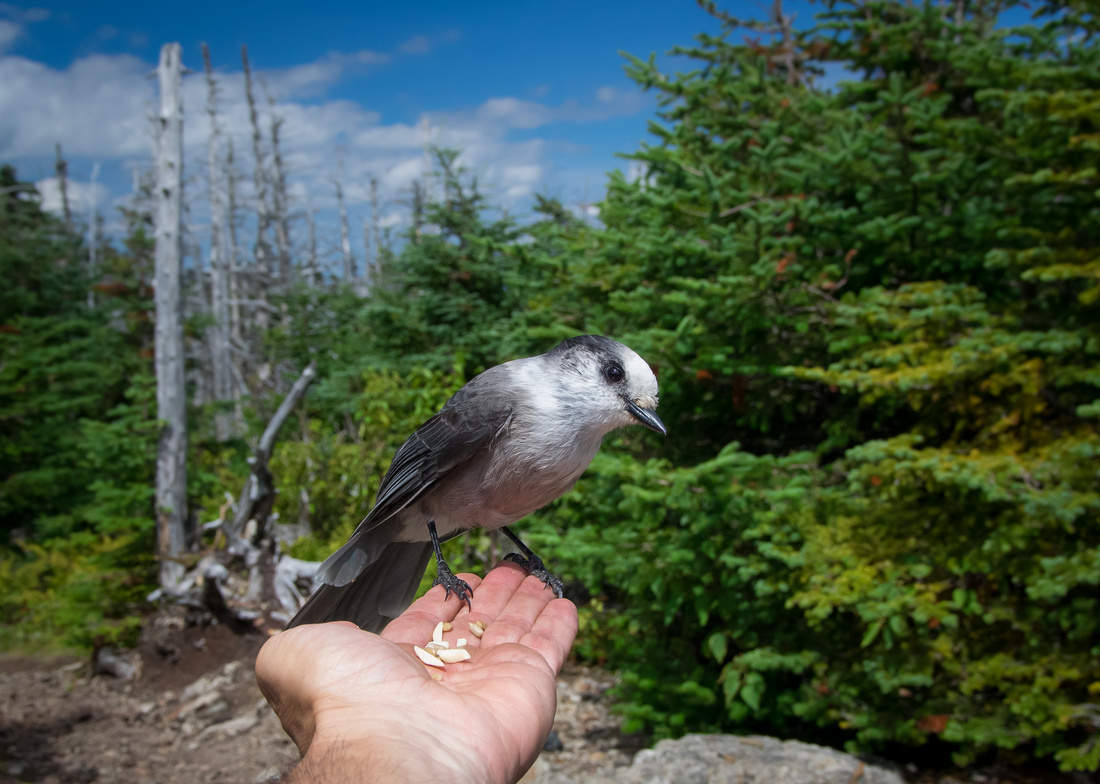 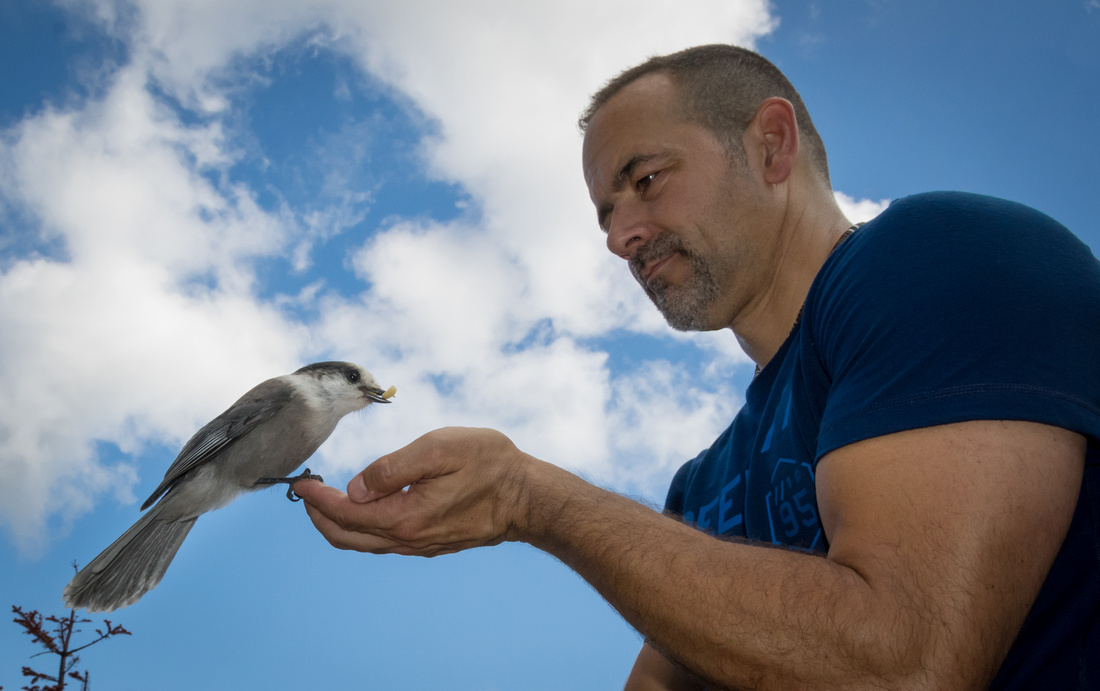 For what it's worth, don't believe most of the stories you'll read about the limited or inferior views from Mt Tom.  No, they're not 360 degree, wide open views, but in my opinion, with very little effort walking around the summit, there are some great views, like this one. 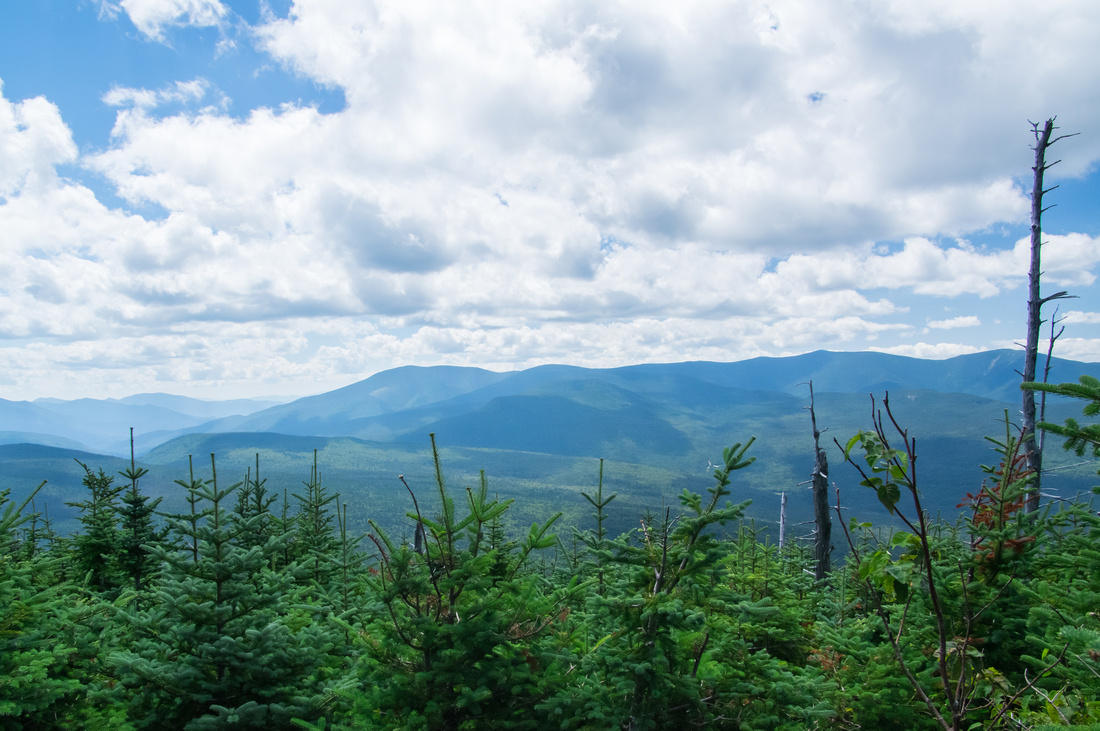 One of the other reasons I choose this route, and not to just retrace my steps back, was I wanted to see Beecher and Pearl Cascades near the end of the A-Z trail.  I knew the water levels would be incredibly low, but I was still happy to make a stop at each of these on the way out. 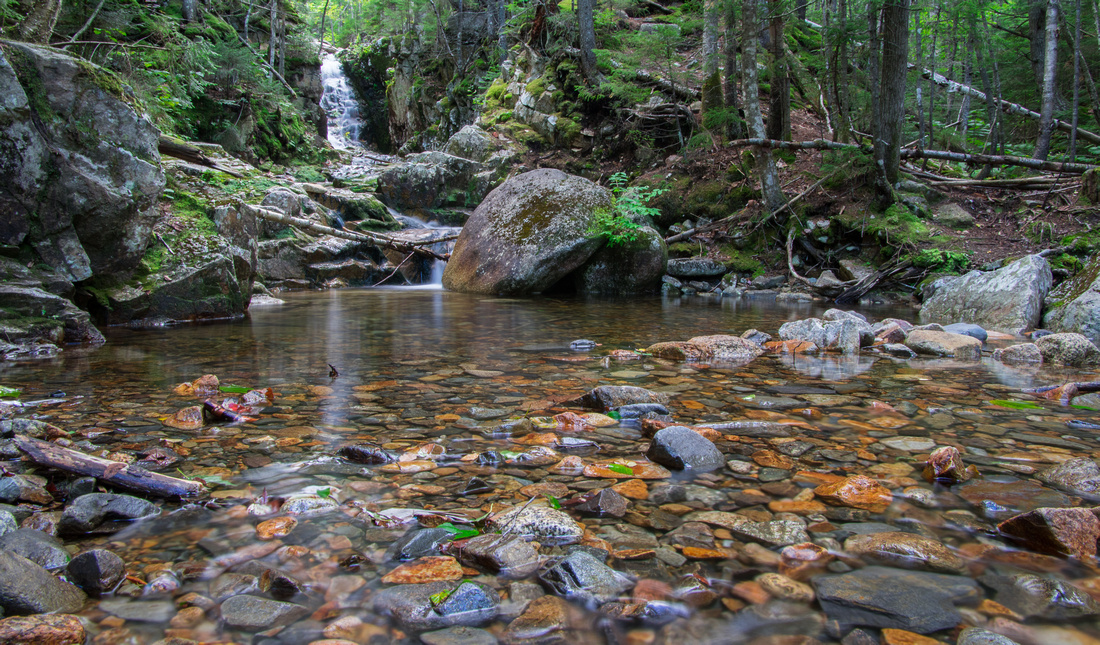 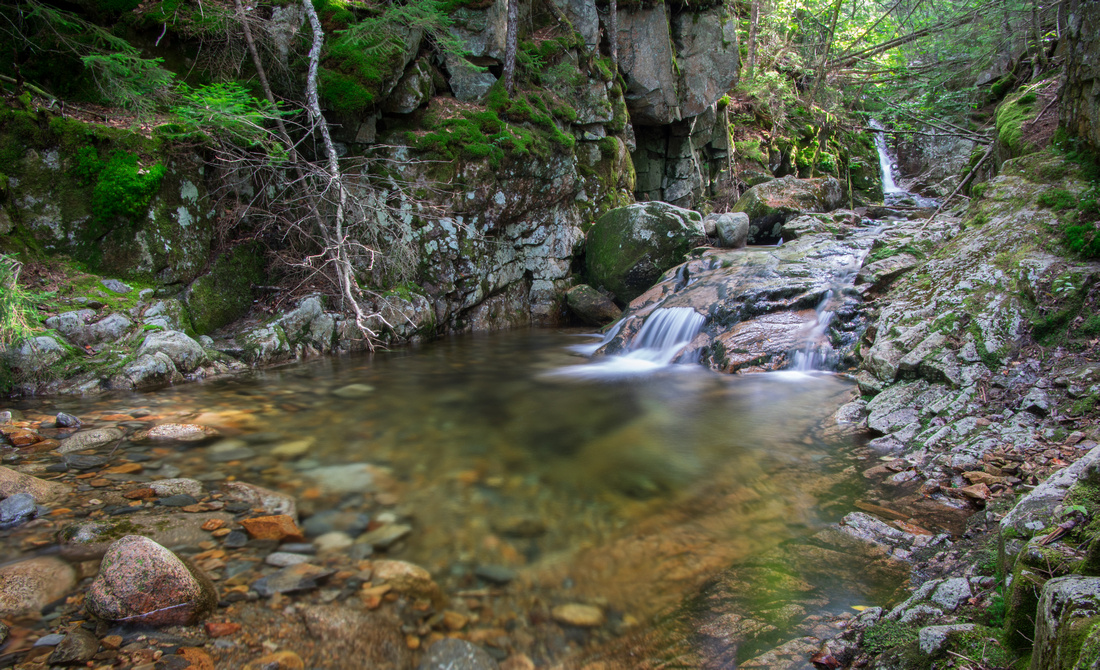 Within minutes of leaving Beecher Cascade, I was at the Crawford station/Highland Center on Route 302, and it was time for my awful, but inevitable three mile road walk back to the truck.  I filled my water bottle at the faucet, started to put my pack on and begin walking, and there was my 'friend' I had met in the morning.  He had already made one trip back to the WIlley House, and was about to make another and asked if I wanted a ride.  I sure do!  And five minutes later, I was back at my truck. One miserable road walk avoided!

Three more peaks reached, and my three goals of the day successfully accomplished. My hike was complete.