On Saturday, September 24th, I reached the summit of my 11th, 12th and 13th peaks on my quest to reach all of New Hampshire's official 4000 footers.

This would be a day trip only, so with the fear of not finding a parking space, and daylight hours drastically shrinking, I left the house at 3:40am, arrived at the trailhead at 6:40 and was hiking on the Crawford Connector Path Trail slightly before 7am. While there isn't much water flow this time of year, the quick side trip to Gibbs Falls was still worth it.  I can imagine this must be a great falls in the late spring. 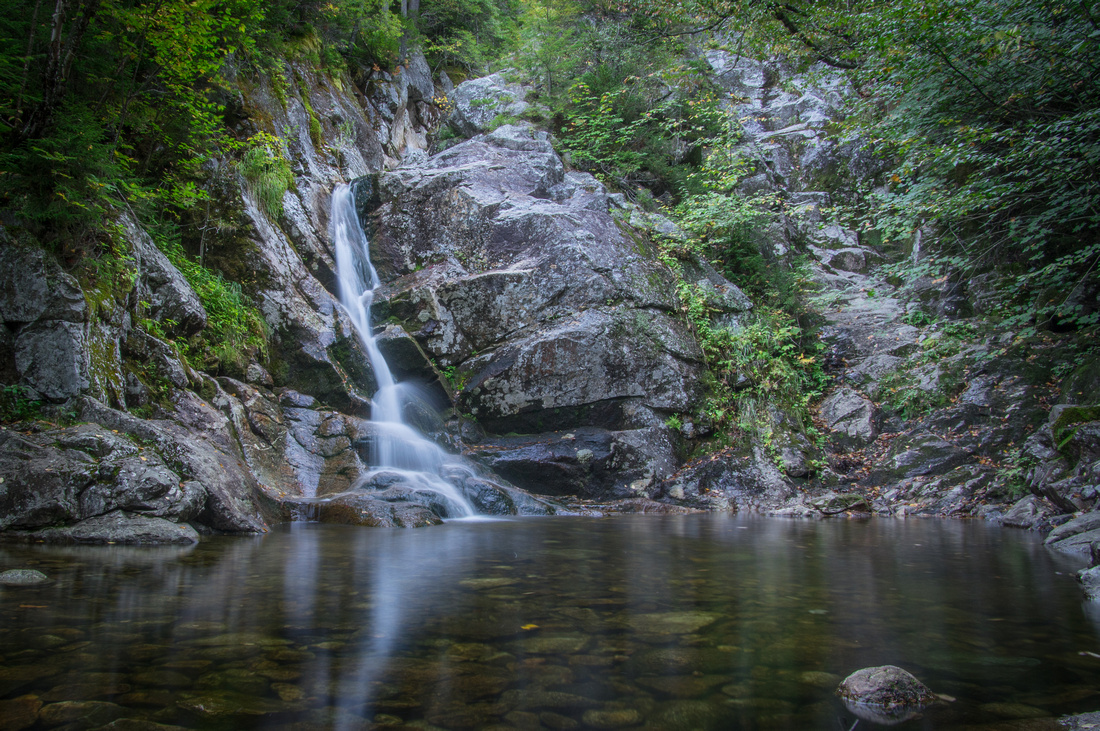 It was a brisk hike this morning. When I left my house, it was 55 degrees, at the trailhead, it was 33. However, with little-to-no wind in the morning, and clear skies, the sun quickly warmed things up as I continued along to the Crawford Path Trail, the oldest and continuously maintained trail in America, on my way to my first of three summits - Mt Pierce. The hike along the Crawford Path was quiet, dare I say fairly easy. I didn't run into a single hiker from the falls all the way to summit of pierce. This equates to roughly 2.5 miles of no wind, no people and only the sound of my own steps and the occasional click of a trekking pole.

As if almost on queue, any remaining morning mist and clouds had just about burned off (or blown off!) the peaks by the time I reached the summit of Pierce. My sights now turn to the brownish, bald peak in the distance of Mt Eisenhower, as seen from the summit of Pierce. 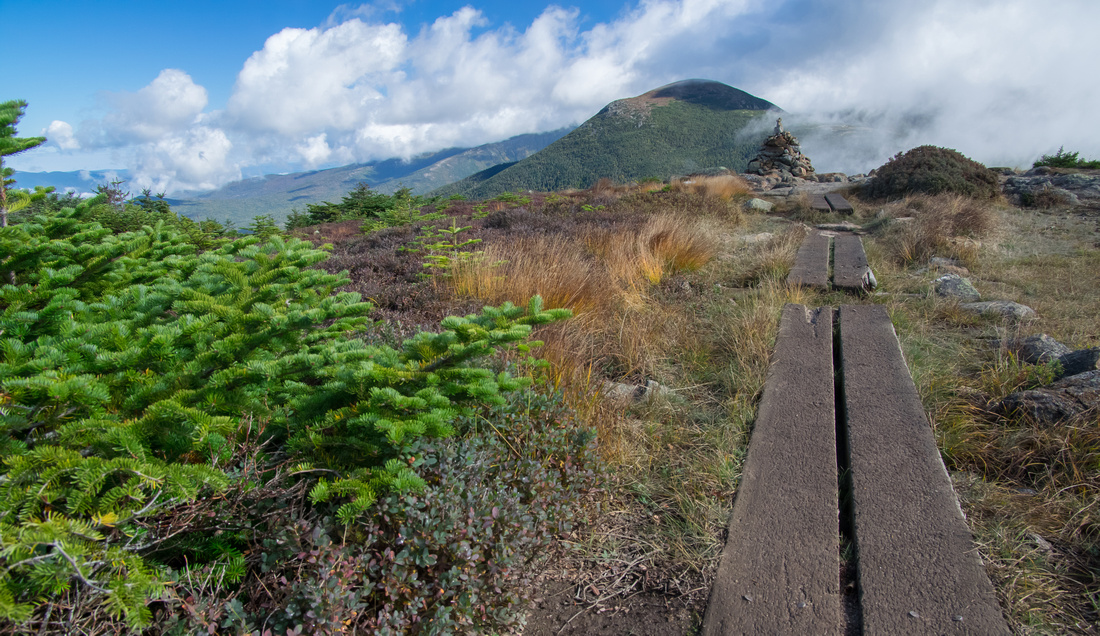 The map says it's 'only' slightly under 1.5 miles between peaks.  It looks close.. until you start walking, and walking and walking! In the picture below, I'm taking a break, almost on the summit of Eisenhower. I spent a lot of time on this day, looking back.  Looking behind me, viewing where I had come from, and not always focusing on where I was trying to get to.  Just to the left (in the photo) of my head, is the first peak of the day, Mt Pierce, the brownish ground in the middle of the green peak. 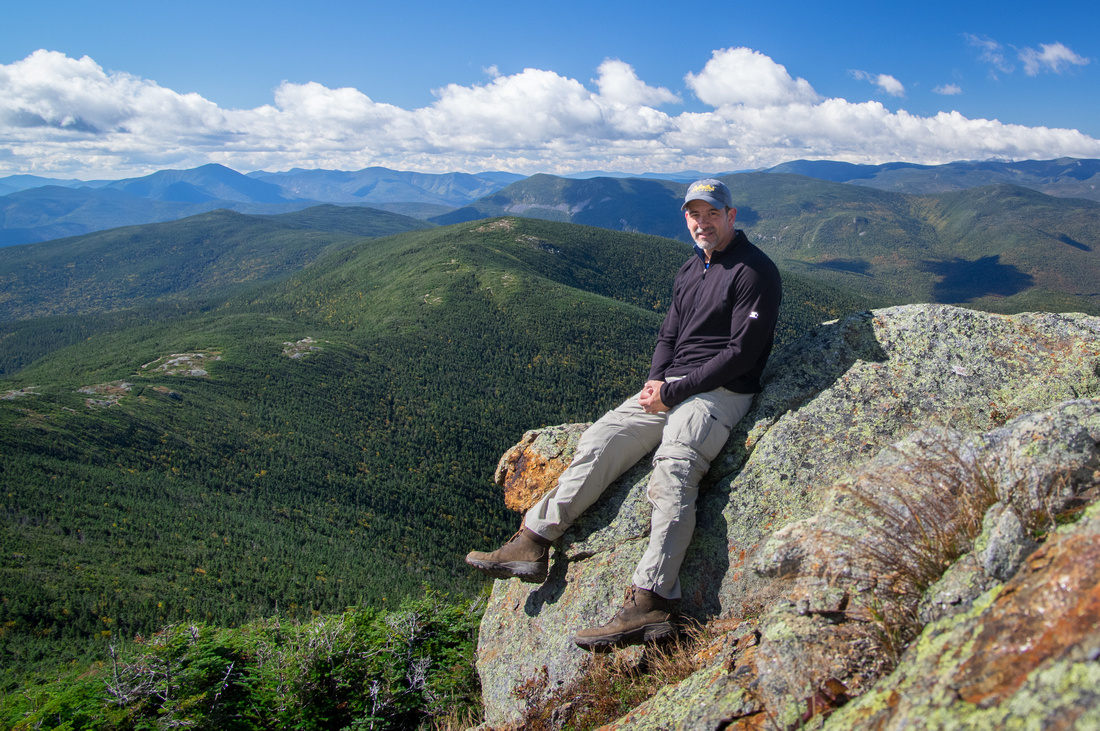 The summit of Eisenhower is unbelievable. Words and photos will definitely not do this majestic peak its justice. At a height of 4760' the peak is completely exposed, providing 360 degree views of the Northern Presidentials, the Mt Washington Hotel, parts of Crawford Notch, parts of Pinkham Notch, and beyond! It's also completely exposed to the wind.  I'm not a wind expert, but I would guestimate the sustained winds around 40mph, with higher gusts.  It wasn't terribly cold, but cold enough and windy enough to not be able to have lunch up there as I had planned.  Before heading back down, I snapped some shots looking towards Mount Washington (tallest peak on the far left of this picture).  It almost looks like I'm on a different planet. What an amazing sight. 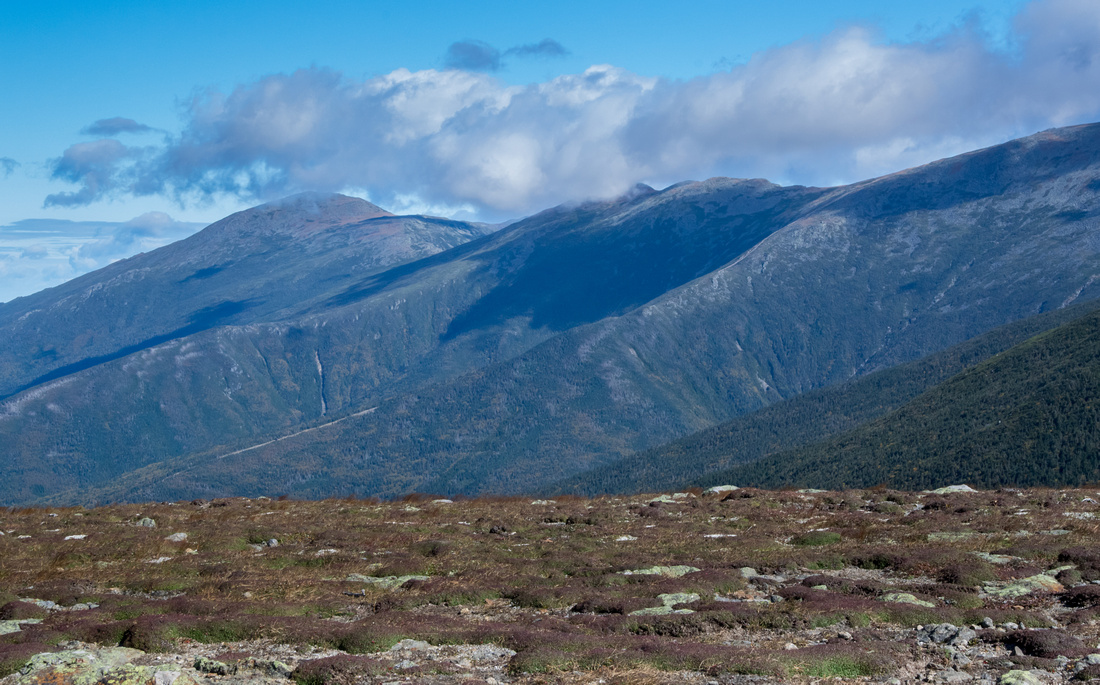 Once again, I made a conscious effort to keep looking back on this day. What views or sights had I potentially missed while hiking along more focused on my footing than on the surrounding beauty? Here's one prime example of a view I missed on my way to Eisenhower along the Webster Cliff Trail (which is also the Appalachian Trail) 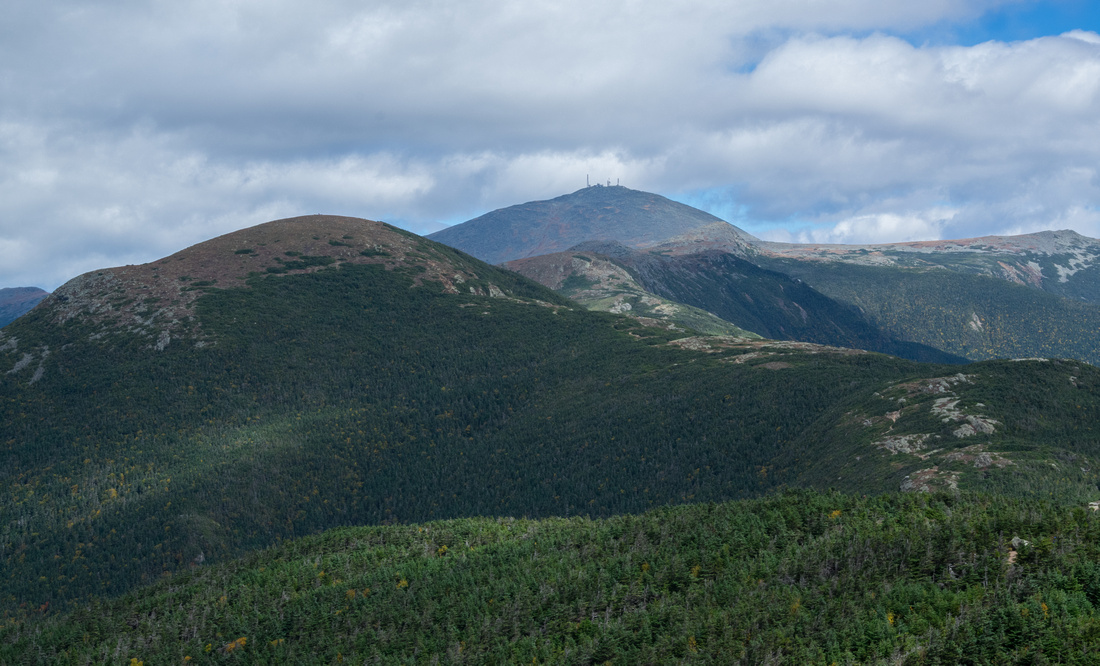 After hiking back over Pierce (my first peak), I headed down to the Mizpah hut for some much needed lunch and to rest for about 30 minutes. The temps were definitely starting to fall, and the winds were steadily increasing, even off the peaks. The 30 minutes inside the warm cabin were welcomed.  After leaving the hut, I would continue down the Webster Cliff Trail (AT) on my way to my final peak of the day - Mt Jackson.  Once again, not only focusing on where I was going.... (Mt Jackon in the distance in this next shot) 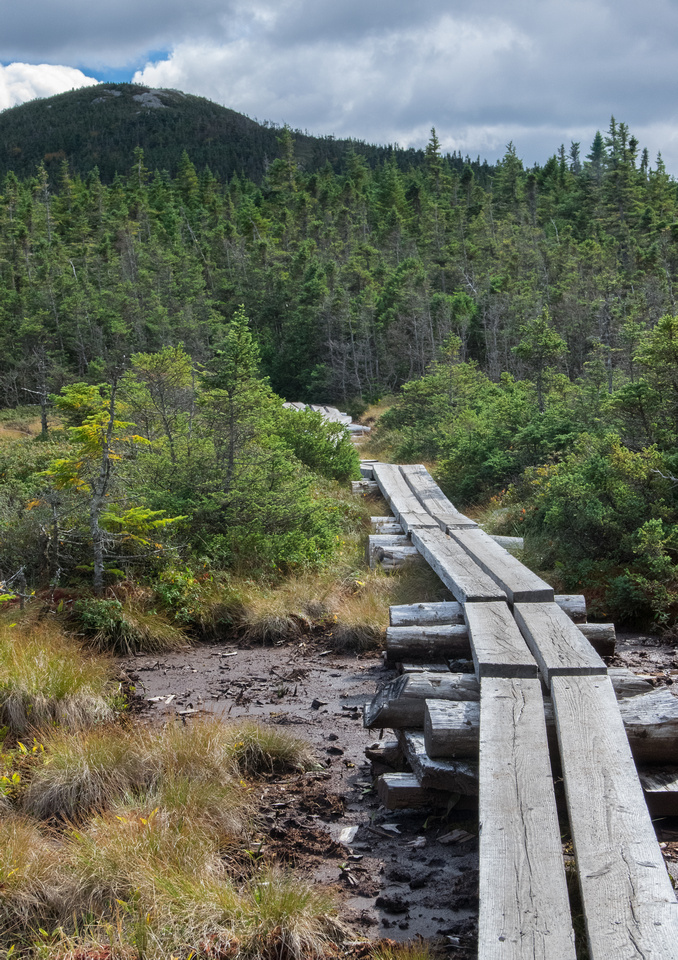 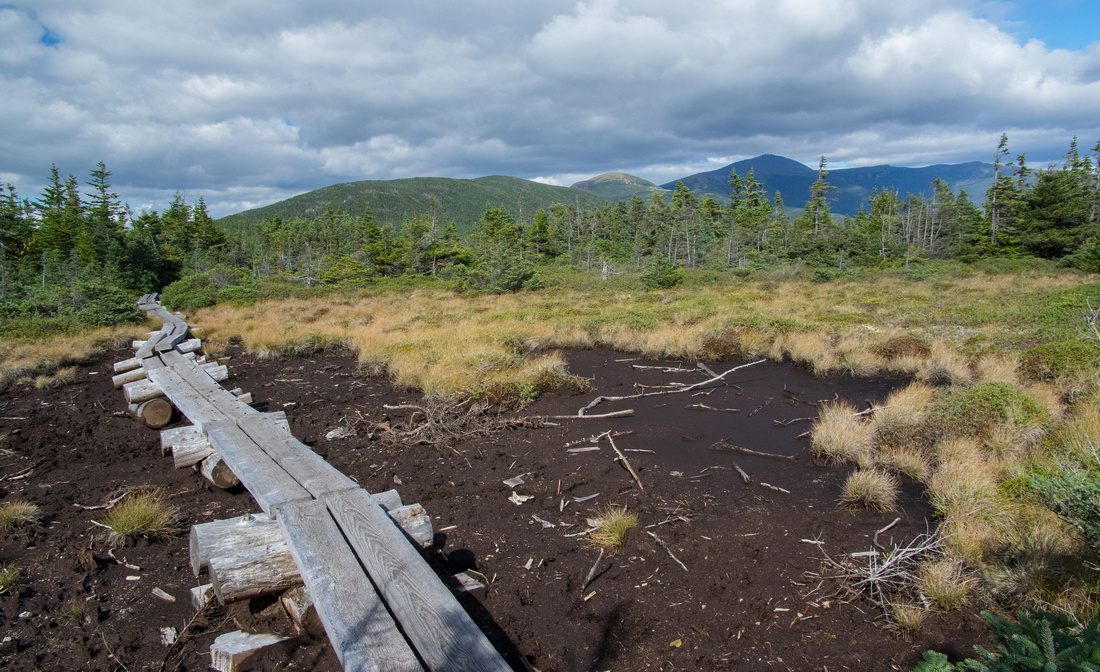 Almost to the summit of Jackon now, and in this next picture you can clearly see the Mizpah hut (white building below the peak of Pierce). Eisenhower and Washington are still very visible in the distance. The summit of Mt Jackson wasn't as completely exposed as Eisenhower, however the wind had increased quite a bit by this point. Thankfully, I was able to hide behind a rock right before the top and put on the wool hat, gloves and extra layers on top.  The wind chill was easily in the 20s and the wind was relentless.  As were the views. Looking northwest up Route 302, the Mt Washington Hotel is that tiny white building with the red roof. You can also see how much the fall colors are already changing in this area.  Columbus Day weekend is usually the peak leaf-peeping time in these parts and I would suspect they are easily a week ahead of schedule. 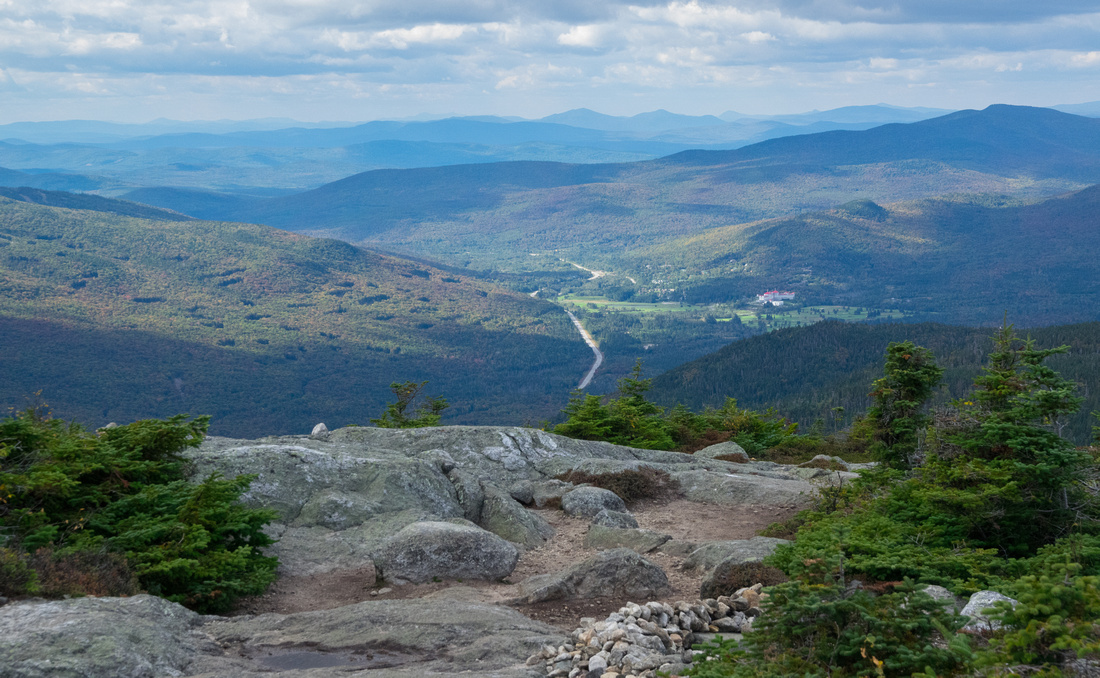 Upon my decent of Jackson via the Webster Jackson Trail, my little friends from my last hike showed up... 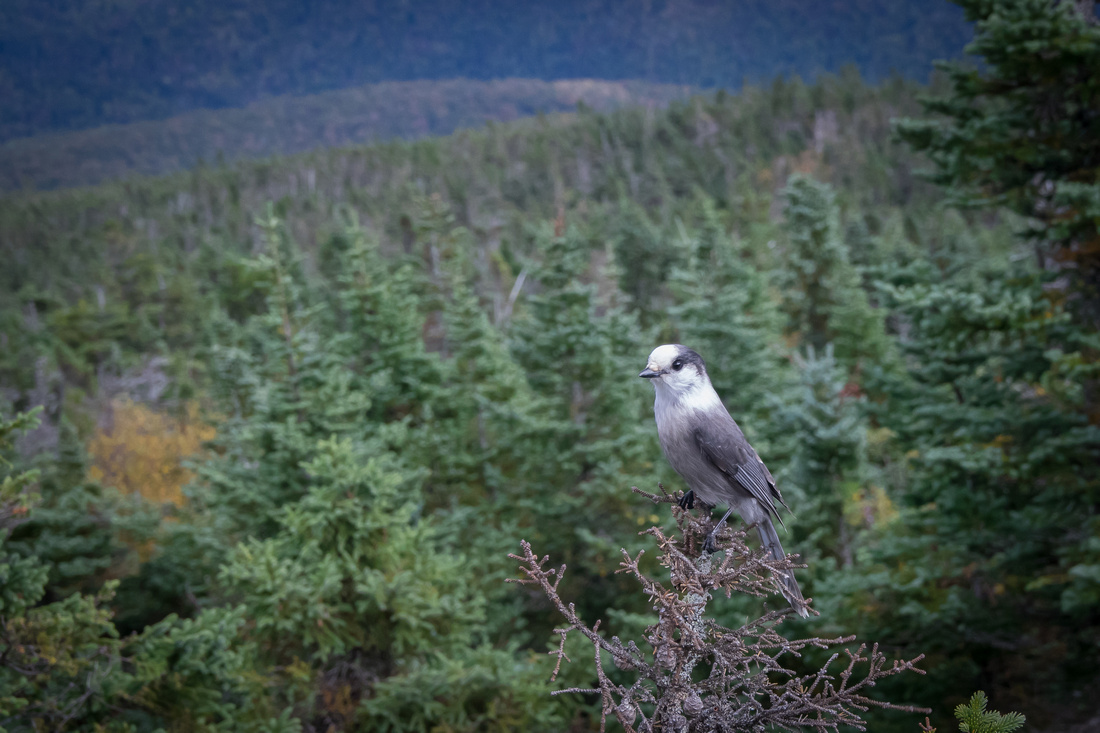 Two gray jays followed me for about 1/2 mile down the trail. I sat down for a water break, and they literally flew and landed on the ground next to me. I know they can't speak, but they looked at me as if to say "um... food... now... please".  Gray Jays area also getting very selective. Sunflower seeds and almond slivers are for the other birds. They only wanted cashews or dried cranberries. 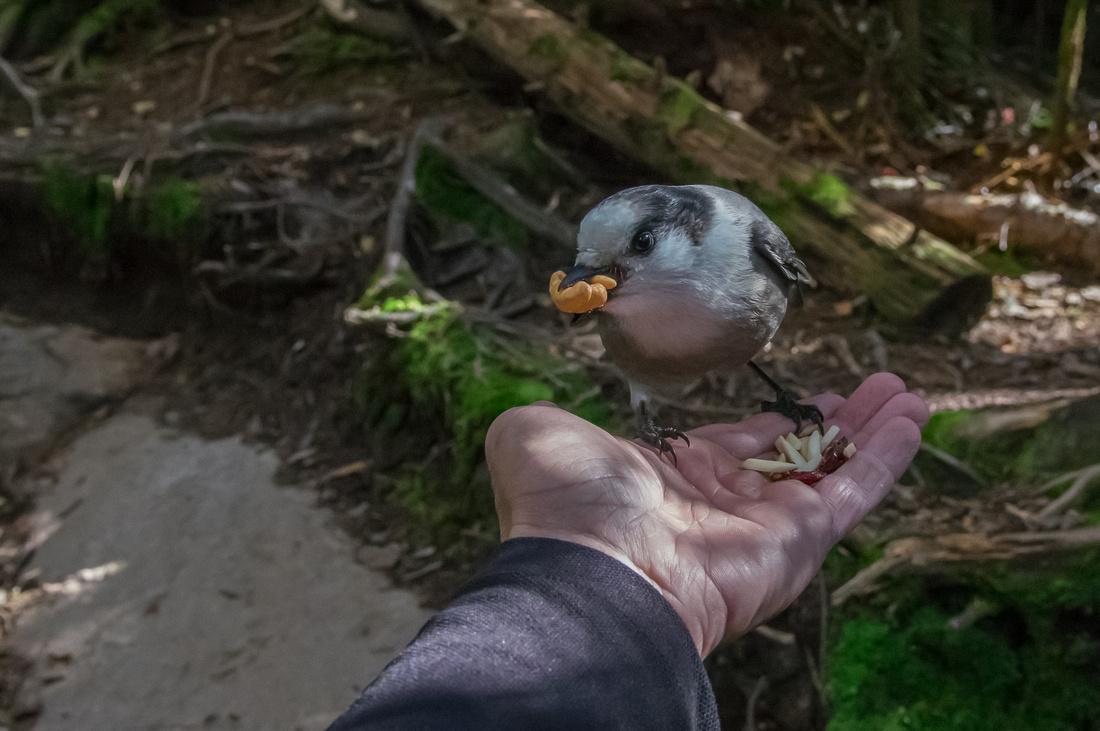 One other observation from the trails I took today would be the word "LUSH". No, not from the standpoint of too much alcohol, but from this standpoint... 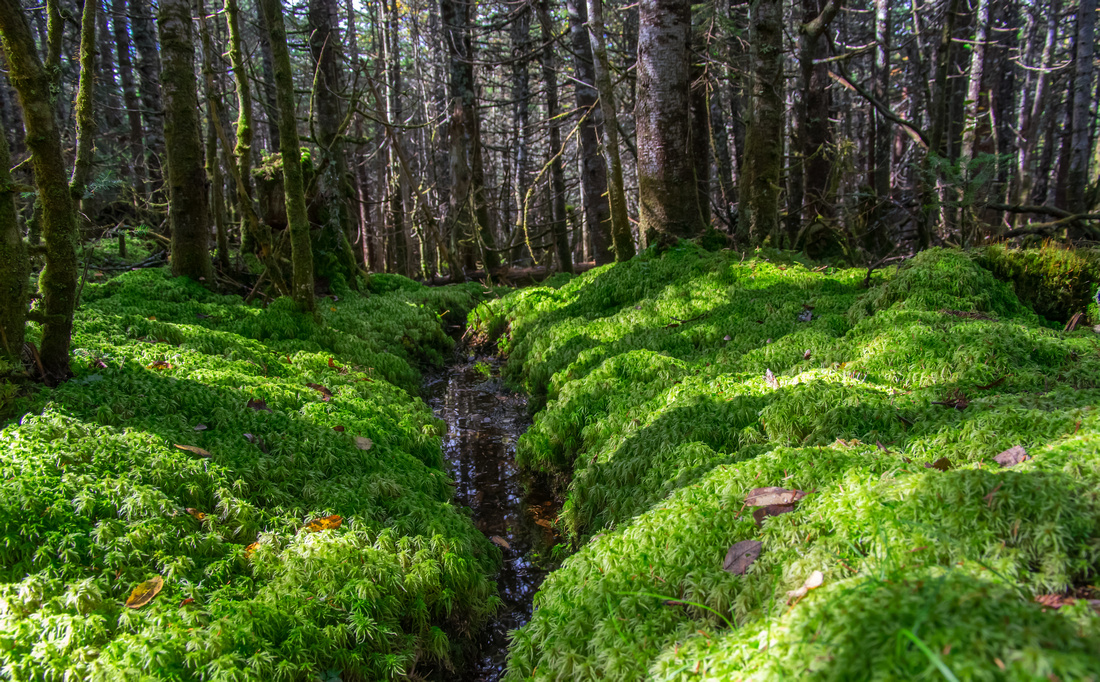 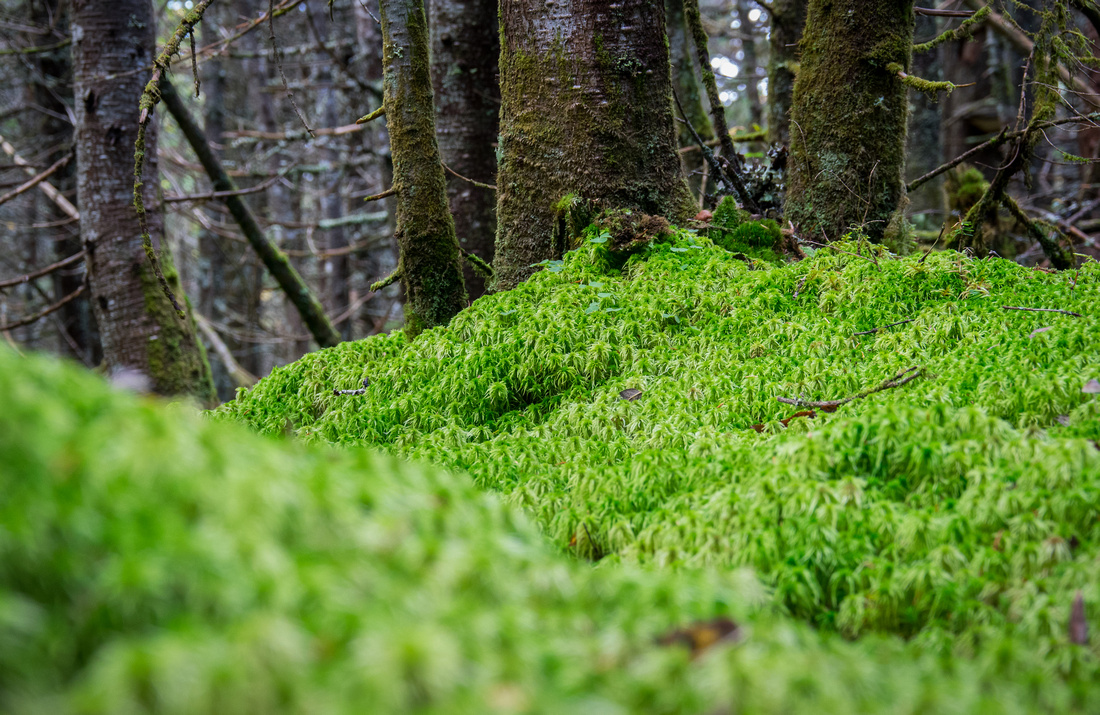 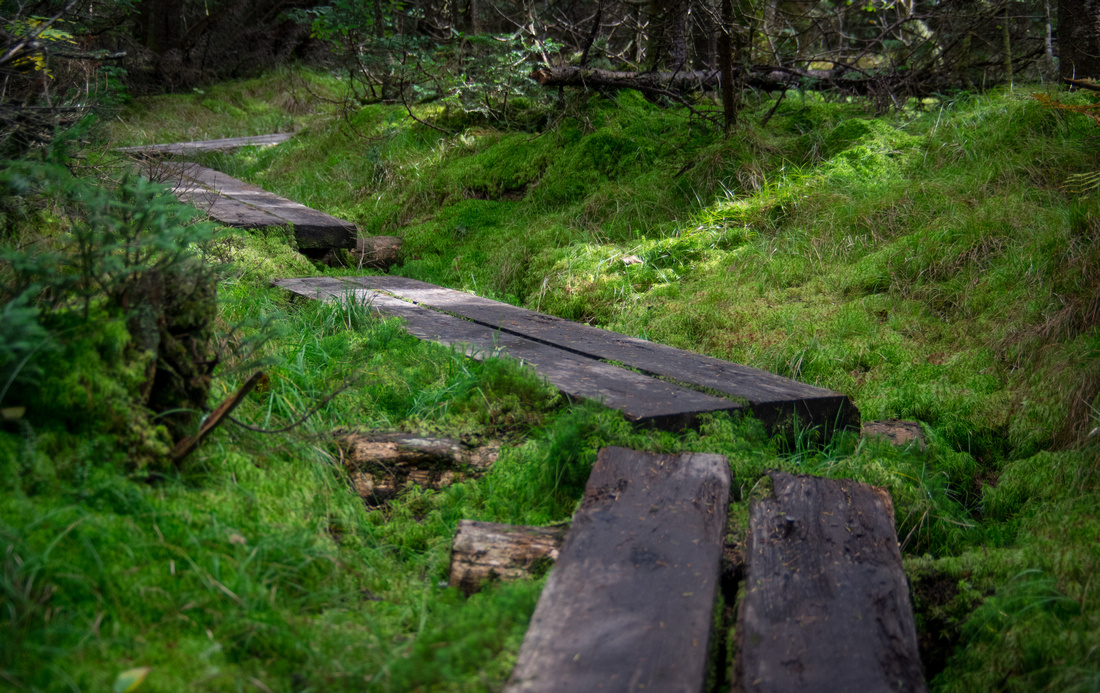 Healthy moss and green ground cover was abundant all day long. I would also hike long stretches and be overwhelmed by the smell of Christmas trees.

From Mt Jackson to Route 302 via the Webster Jackson Trail it is about 2.6 miles to the road, then a short-ish road hike back to the truck. The totals for the day would be three more peaks, a little over 11.5 miles of trails, and more amazing scenery and memories. The White Mountains are truly a special place.  We are blessed to live to close to this paradise.