On Saturday, February 18th, I planned on hiking my first official winter 4000 footer to Mt. Liberty.  I had obtained all the necessary equipment.  I had planned and shared my route, departure time, and every other detail and aspect that goes into hiking a high peak.  Then, the night before, I received some reports that were less than favorable for being able to have enough confidence to safely summit Liberty on my own.

Plan B: Hike Mt. Whiteface. It was within driving distance for a day hike, and I had at least one report of someone breaking trail the day before. New map, new plan.  Upon arriving at the parking area off of Ferncroft road, there were only three other cars in the parking lot.  This was not a good sign for either being able to join up with other hikers up Whiteface, or at least have the confidence that others had already started in that direction.

Plan C: Sheepishly invite myself along with the three women I met in the parking lot as they were bootin-up to hike Passaconaway.  After a few quick introductions, I headed off with Jackie ('Jack Rabbit'), Diane ('Little D') and Andrea ('Socks') on our way up to Mt Passaconaway. The peak can be seen in the far right upper corner of this picture from the beginning of the hike. 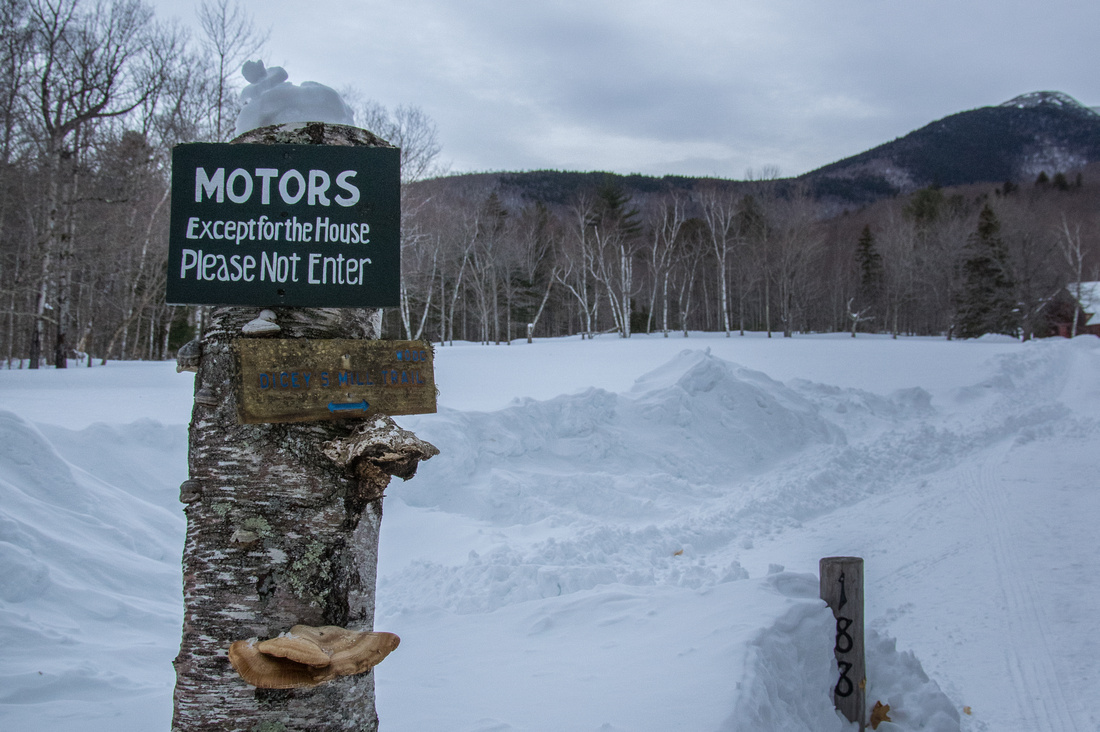 We would be taking the Dicey's Mill trail, to the Rollins trail over to the summit, and then back down on the same route.  We were all very happy to see that we weren't first on the trial. While the snow was still incredibly deep, and still a bit loose, we were all smiles to be on our way, and not breaking trail.   The morning's sunrise refused to quit on this day, and it was still showing off an orange glow in the background as we began our ascent.

The joy of not having to break trail was very short-lived. After we came to the camp site of the snow cave campers who had broken trail to this point the night before, it was now our turn. We alternated positions in our line, and took turns breaking trail through knee-deep, and even waist-deep drifts, while also doing our best to locate the blue trail blazes. Most of the blazes were unable to be seen as they're marked on the trees at a point of which is now below the snow depth. 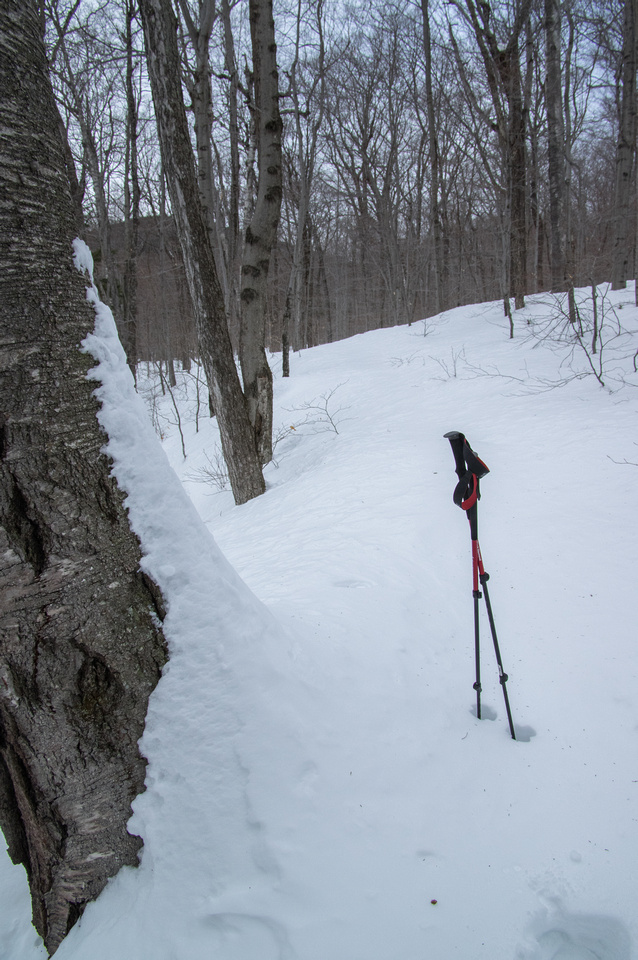 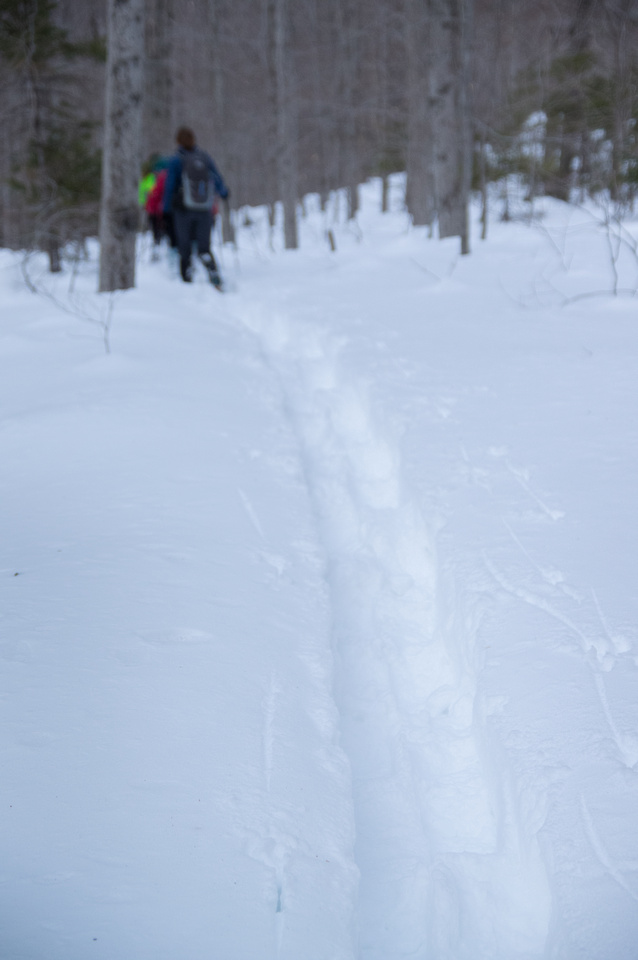 Jack Rabbit - Blazing the way up to Passaconaway 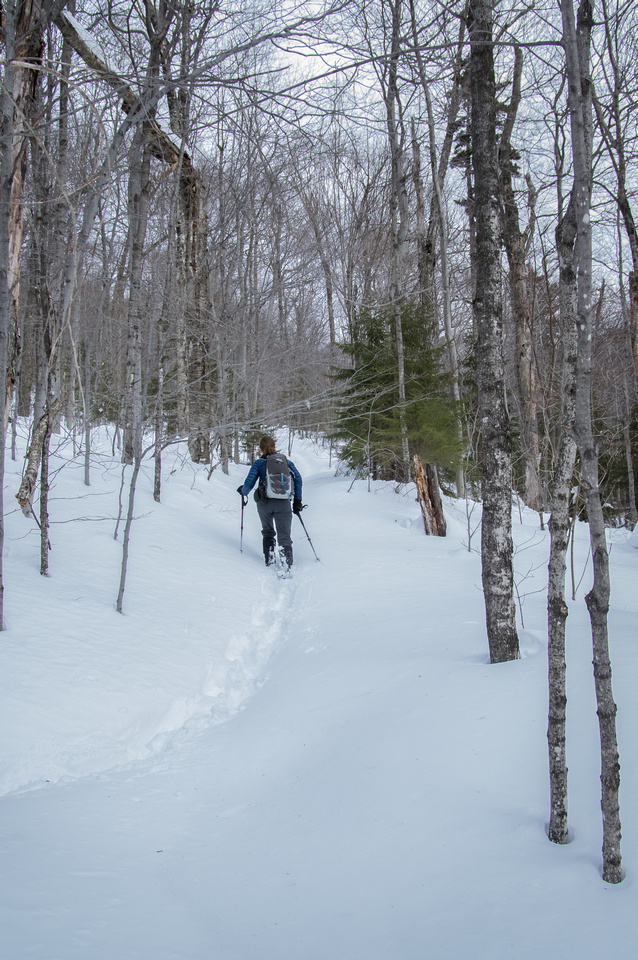 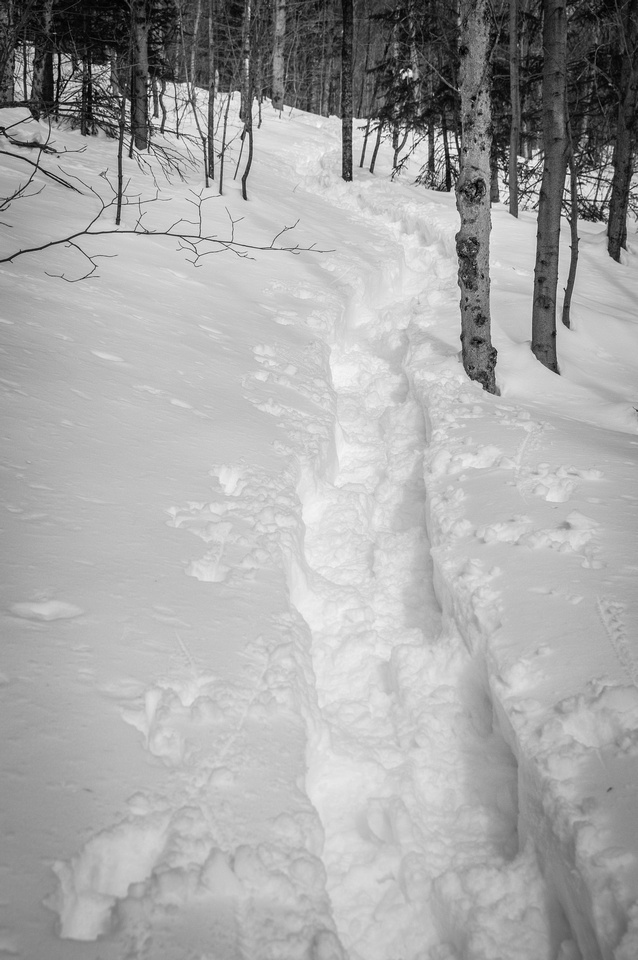 Little D - in the unenviable first position on the trail. 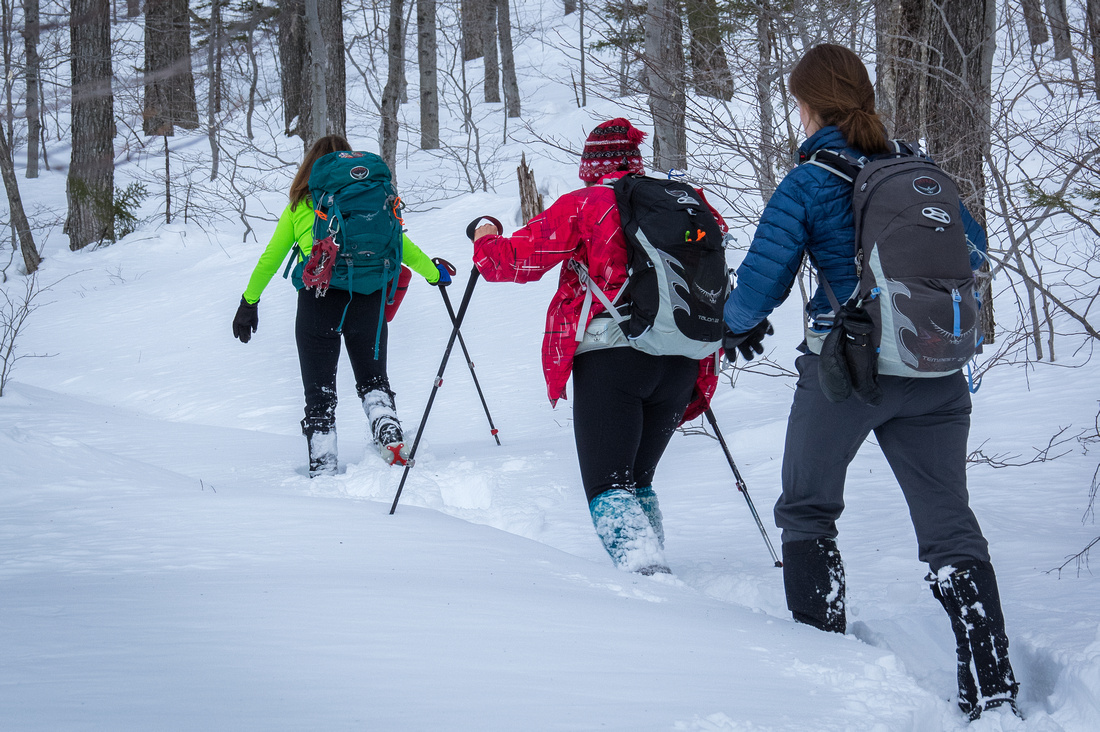 We had fairly difficult time finding the logs and rocks under several feet of snow in order to safely negotiate this stream crossing. 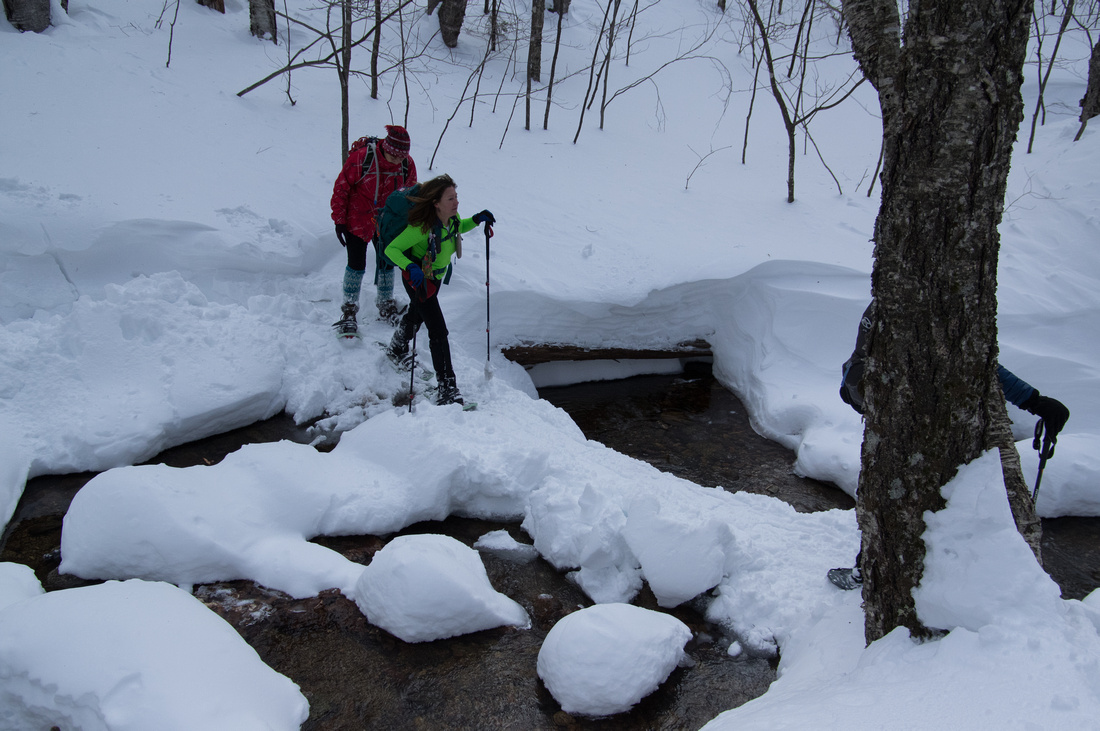 Here's a good example of how deep the snow is.  These trail markers are at approximately chest level without any snow. 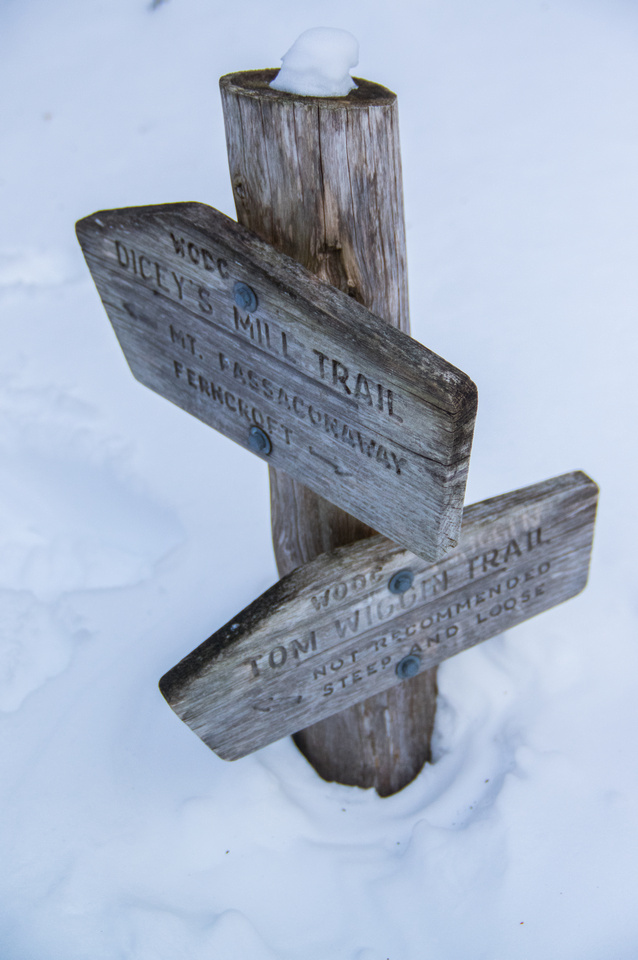 Different than my other hikes, there was very little opportunity to explore and look for those little-seen details along the way.  One step off of where the trail was, and you found yourself over your waist in snow. However, there are always interesting sights along the way, if you stop and look around.  Some shelf mushrooms hanging around through the winter, evidence that even the mice have to break trail, and many trees showing the signs of recent moose peelings along our ascent. 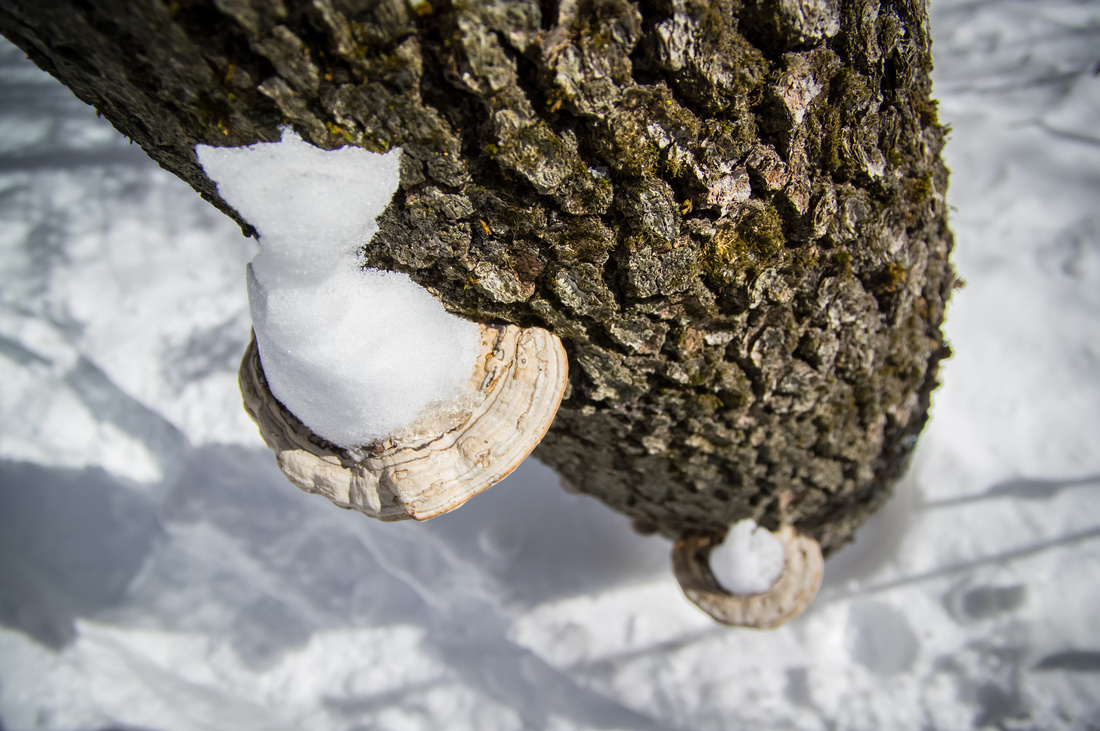 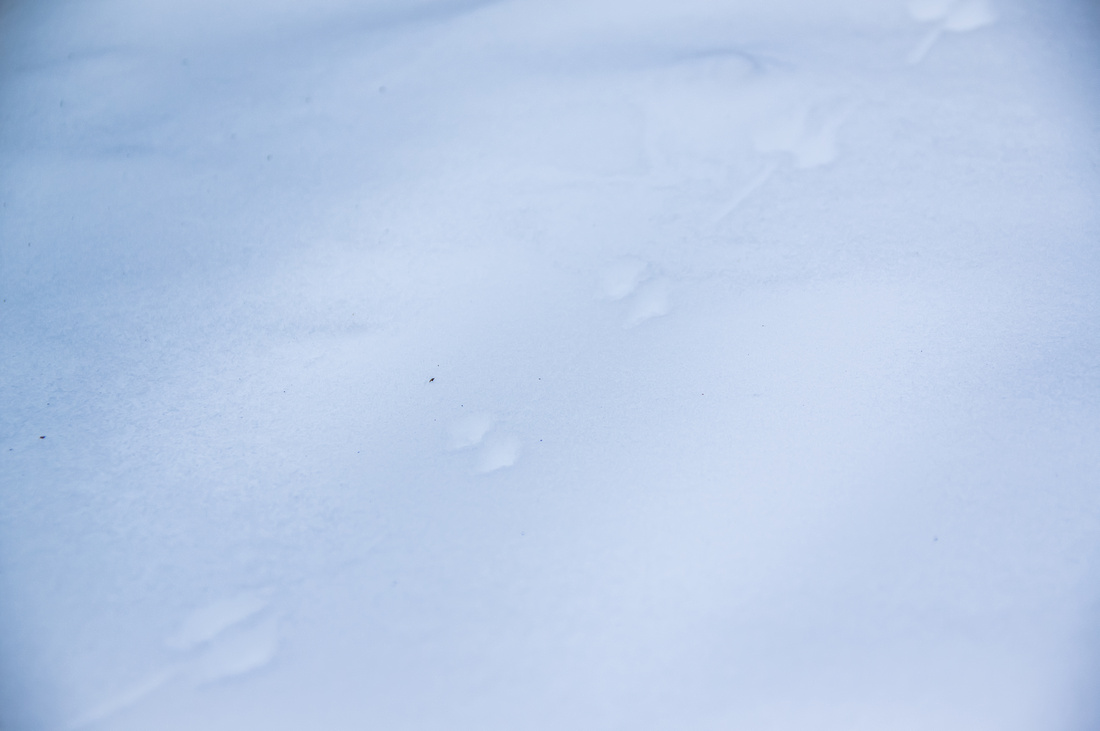 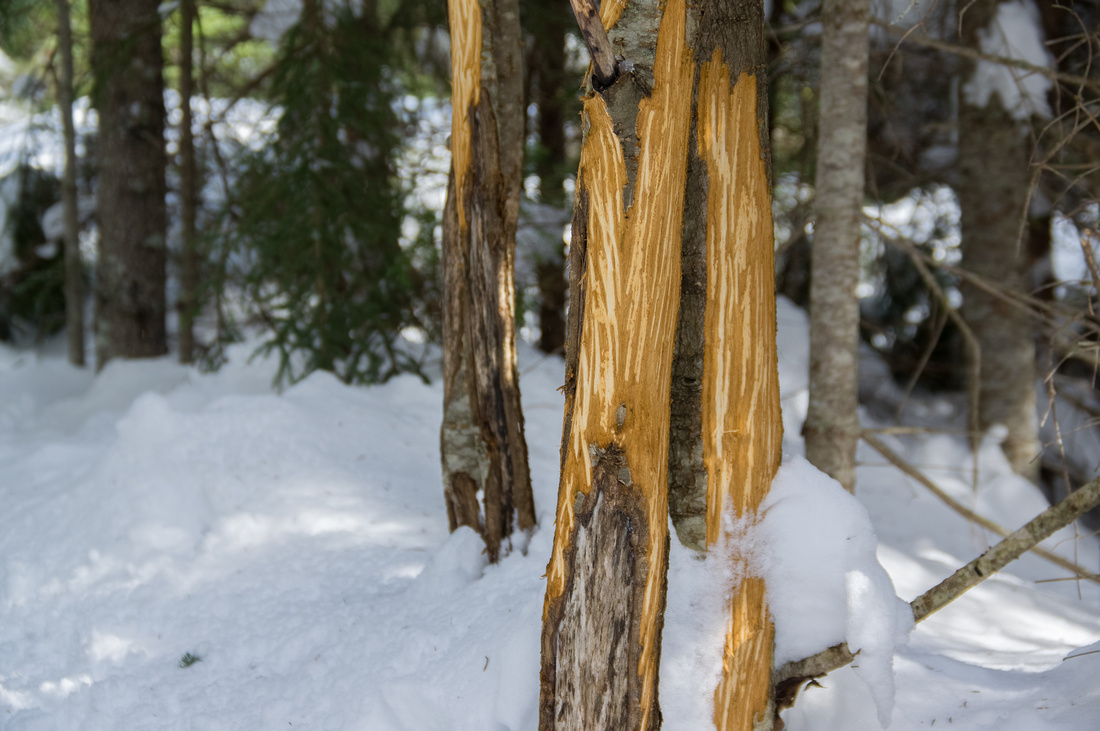 Back to the hike. From this sign, to the summit, is slightly under a mile.  And, as with most summit approaches, it's the hardest mile of the day. Especially in such deep snow. 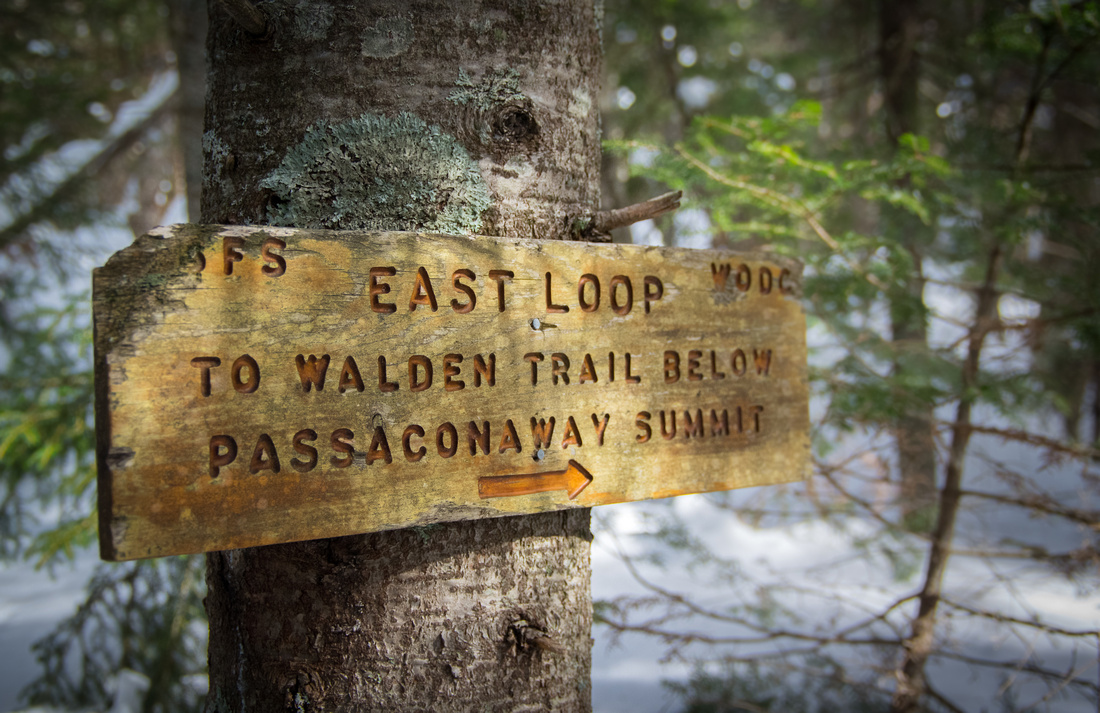 Yes... that's the trail in the middle of the picture below. 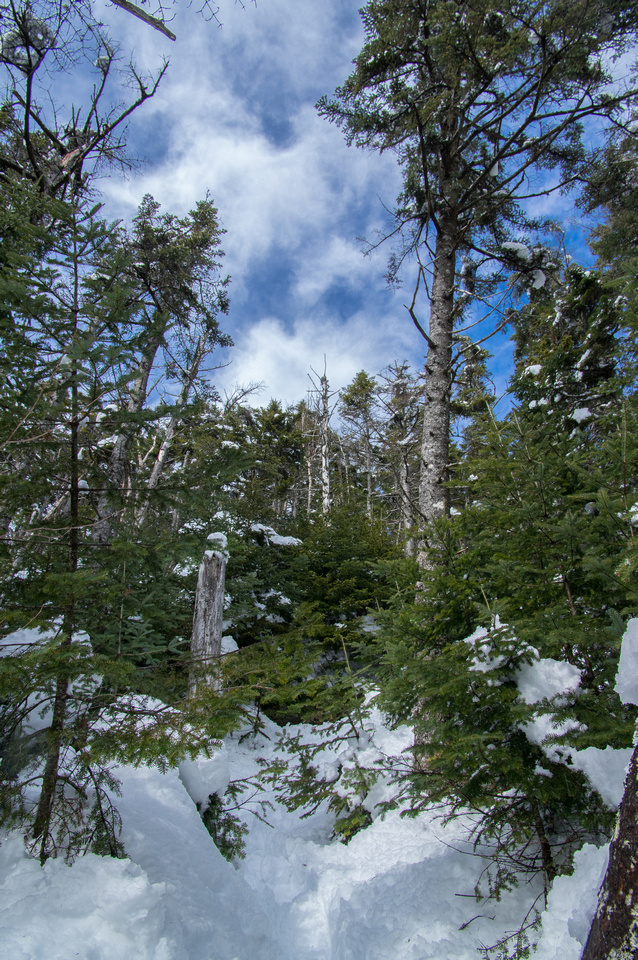 The other similarity to most hikes, during the last painful mile, just when you've got the feeling that you can't make it another step, the mountain begins to dish out the rewards in the background. 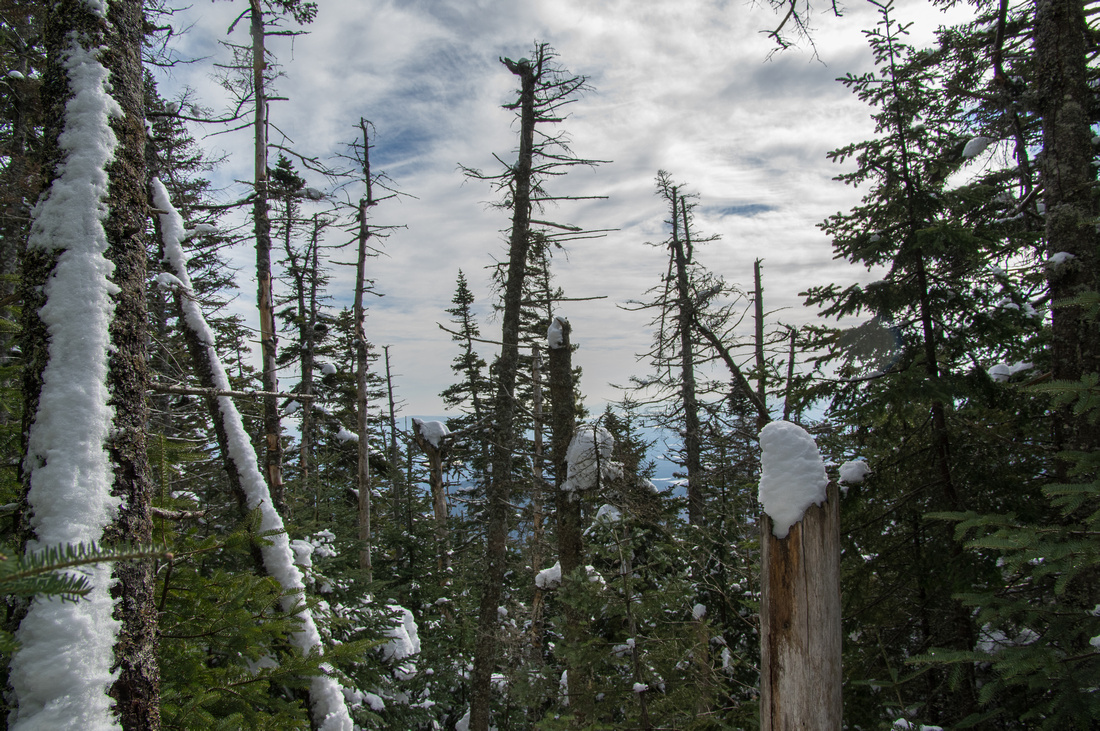 I've been asked on too many occasions to count, "why bother?", "why do you put yourself through it?".  The words 'worth' and 'value' will always be subjective to us all, but for me, views like this have absolutely always been well-worth it!

Franconia Ridge in the far background. 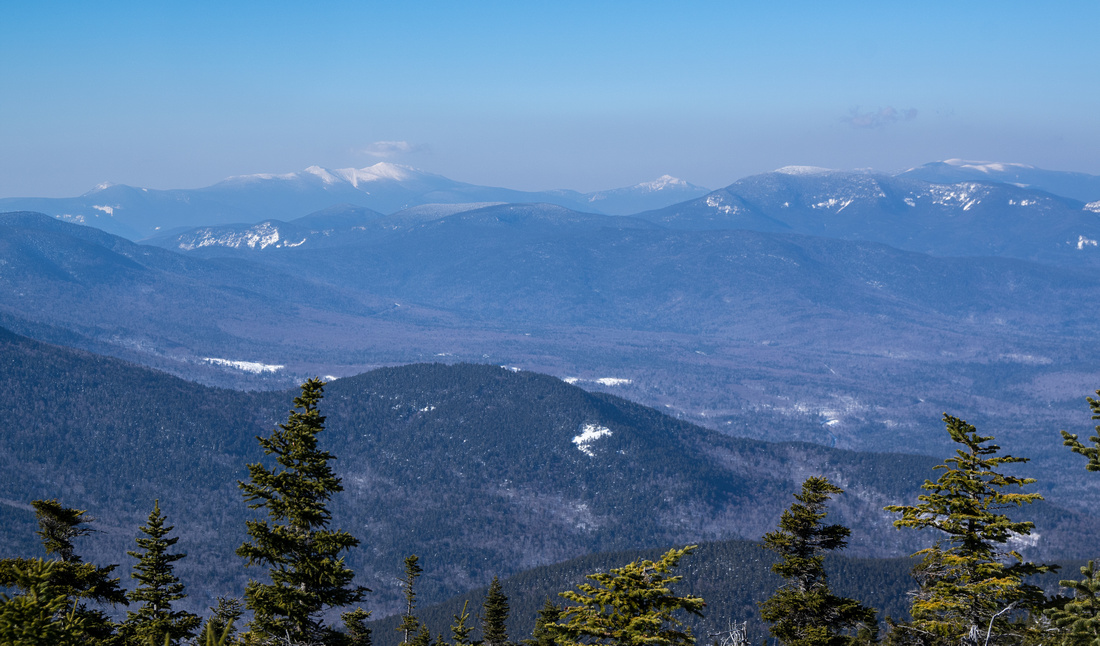 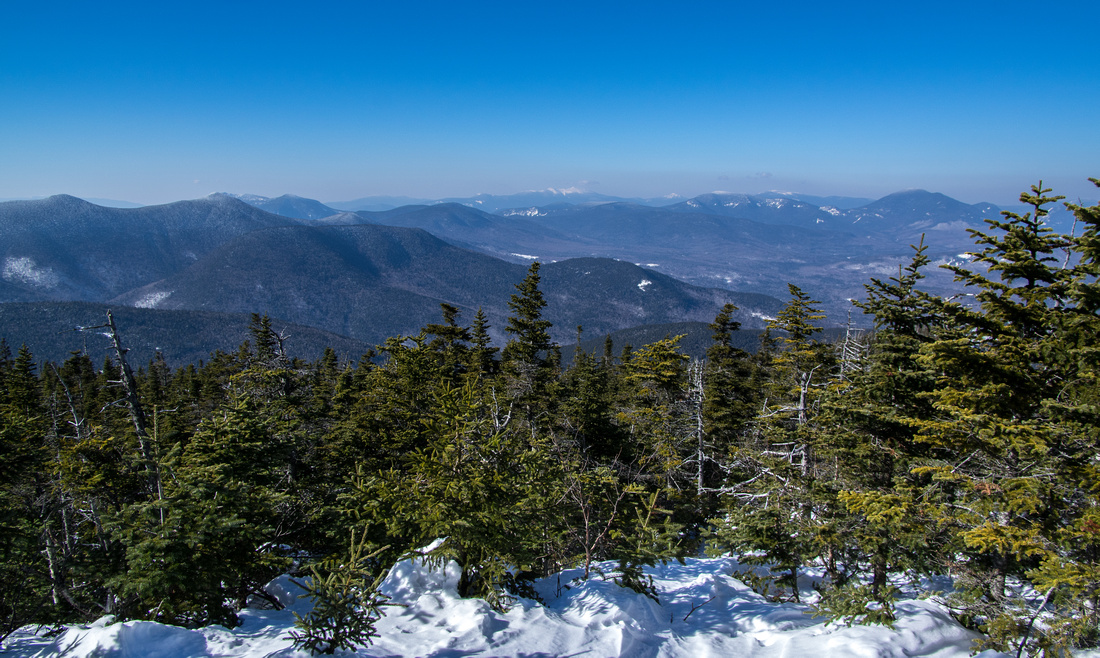 Tripyramid peaks as seen from the lookout from Mt Passaconaway 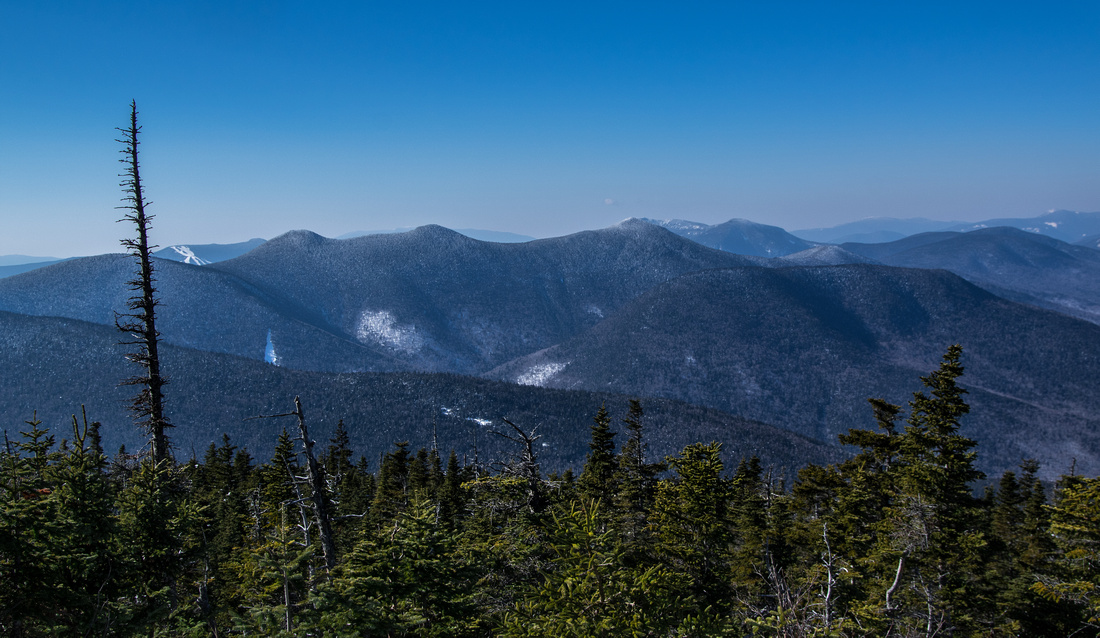 My three newest BFF's!  Celebrating their amazing accomplishment.  We were rewarded with clear skies and amazing views for all our hard work, and trail-breaking suffering. 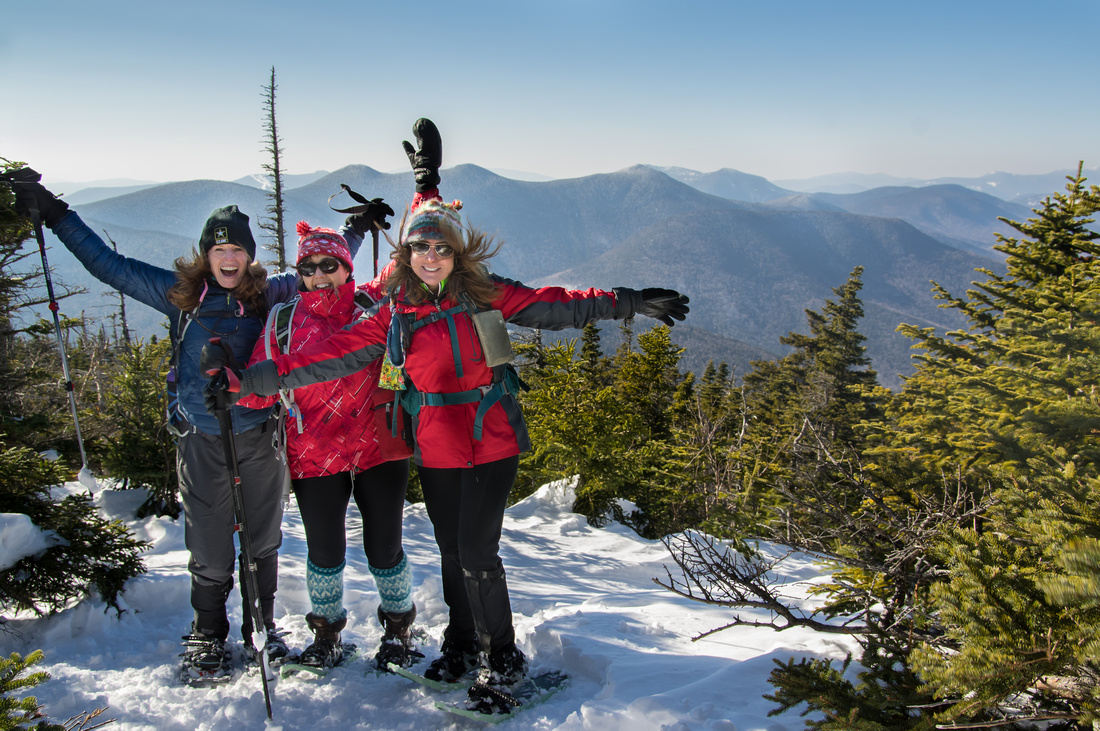 Group hug on the summit.  It was a true team effort to make it to this point. 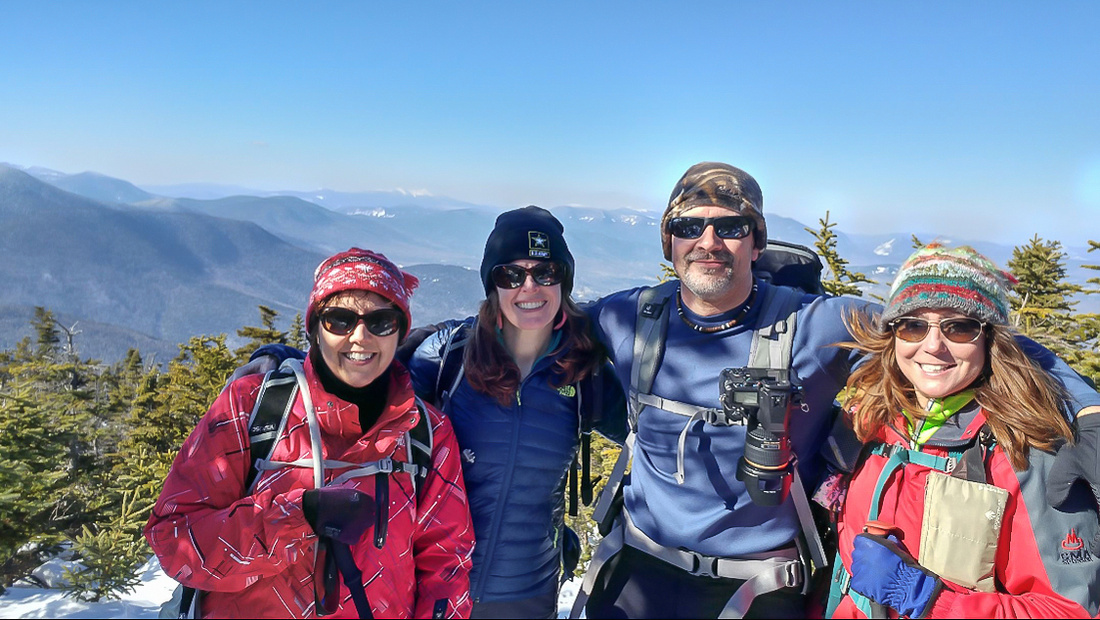 After some much-needed nutrition, it was my turn for a photo with the view (photo by 'Jack Rabbit'!) 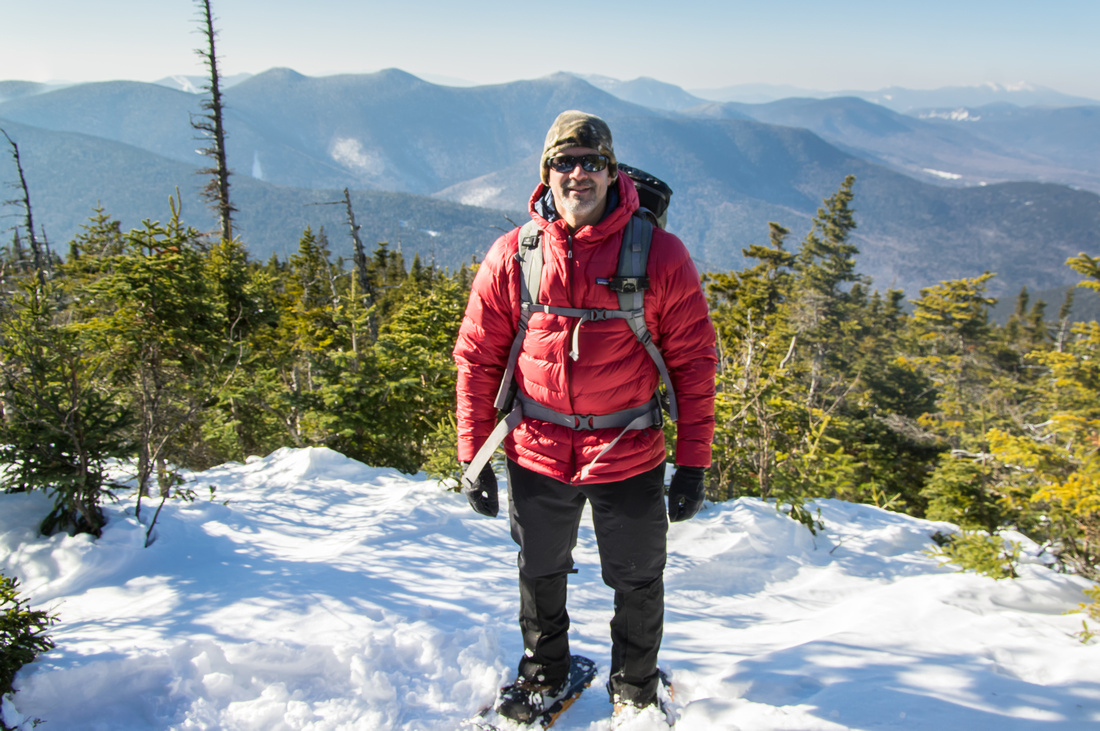 The afternoon light on the hike back down was beautiful.  Here's the ladies are enjoying a little rest on the way back. "Trail spa" 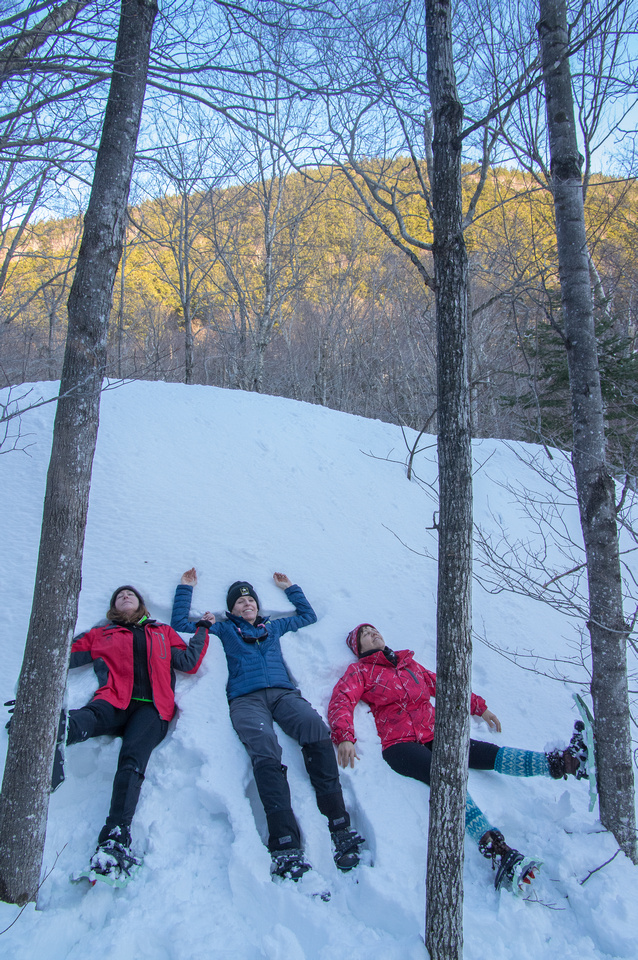 It took us 7 hours to do the 4.6 mile hike to the peak and approximately 3 hours to descend. Once back down, the same orange glow and beautiful skies that sent us off that morning, greeted us upon our return. 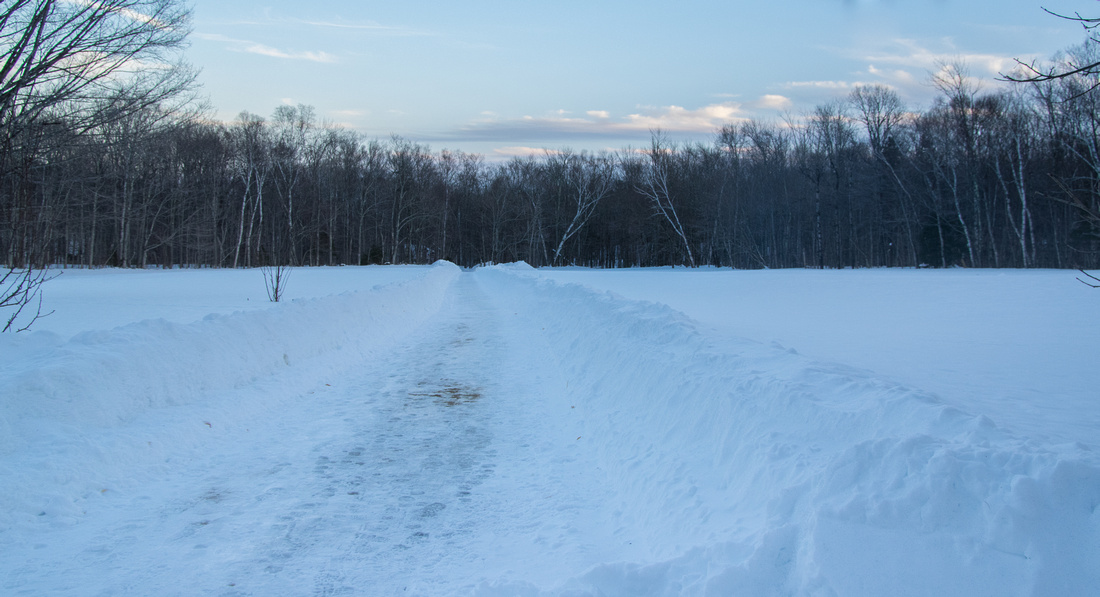 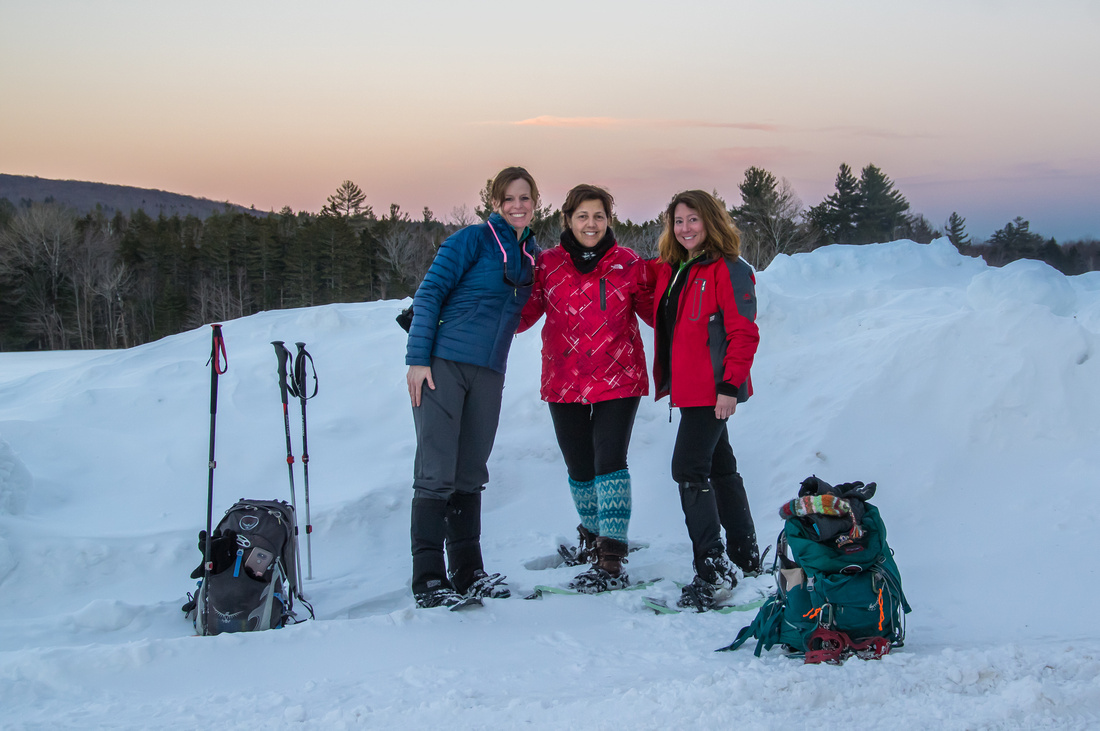 You will often hear the term 'the hiking community'.   I have experienced this first-hand on every hike I've been on.  However, yesterday was the purest form of the definition of that term.  We all have met, and will continue to meet, great people along our travels on the trails. On Saturday, I made three new friends. It could have been very easy for them to not accept my self-invite on their hike. Instead, they welcomed me into their group, we worked together for a common goal, and laughed and struggled our way to the top (and back down!).  Thank you Jackie, Diane and Andrea for making this my most memorable accomplishment in The Whites.  Here's to many more hikes together.